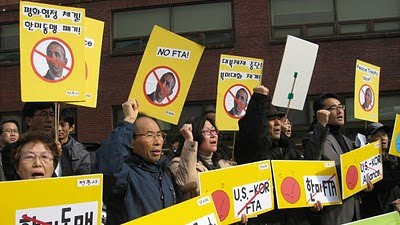 Koreans say "No" to U.S. industrial agriculture (a/k/a "Food, Inc.")
(Photo: No Base Stories of Korea)

Martin Frid at Kurashi has posted on the Obama White House's latest attempts to put Japanese and Korean farmers out of business so U.S. industrial agriculture (a/k/a "Food, Inc.") can move in:


The U.S. wants more free trade to export its beef and cars to Asia. Yonhap, the official South Korean news channel says, there is no deal, as Obama fails to get Korea to agree.

Meanwhile, Japan is up in arms against the so-called Trans-Pacific Partnership Agreement (TPP), another badly-thought-out deal, that would make it impossible for Japanese farmers to compete with cheap imports from the U.S.

We know that beef and cars are the main culprits that cause climate change and environmental havoc, and we have noted that the U.S. Officially Do Not Care (C). Case in point, the Obama administration is not even thinking about joining international efforts like protecting biological diversity on this beautiful planet. He will also not visit Hiroshima or Nagasaki when he arrives in Japan this fall.

We do know that there are a lot of intelligent and socially aware citizens in that country who would like to combat climate change and stop the madness, be it nuclear or biocidal. We just wish they would stand up and join the fight against so-called free trade agreements (there are actually clauses that are worse than the WTO TRIPS agreement, to impose strict patent rules on stuff like DNA, that the U.S. Department of Justice has just told courts to be null and invalid).

Note that this is all Orwellian speech: there is nothing "free" about trade for countries that sign up to these rules. Japanese Prime Minister Naoto Kan said the risk was of "competitive devaluation of currencies reminiscent of the Great Depression" - according to a good sum-up of the G20 talks in Seoul by Yahoo/AFP: Currency disputes dominate G20 summit.

The TPP is a Free Trade Agreement in disguise, pushed by a government that is now printing paper money (600 billion dollars as we blog) while trying to get Korea and Japan and others to sign up to its so-called policy of "Quanitative Easing" which you have to explain to me. "Easing?" What is so "quantitative" about it...

More beef (pumped up with artificial growth hormones, force-fed with patented GMO feed) and cars? If you can even call them cars. Just how will this solve the global economic pain?


Mainichi: "Japan will have tough time protecting farmers from trade liberalization under TPP"

Japan has already come under mounting pressure from the United States and other countries involved in the TPP to eliminate import tariffs on beef and these countries will not likely agree to exempt rice from trade liberalization, as Japan has demanded during past international trade negotiations.

"Far more effective measures to protect domestic farmers are necessary in preparation to participate in the TPP than those taken when Japan signed the 1993 trade agreement in the Uruguay Round of multilateral trade talks in 1993, under which Japan partially liberalized rice imports," says a high-ranking government official.

Over the next few days we will find out if great countries like South Korea and Japan with a long history will abandon all the efforts to seriously deal with real global issues like peak oil, climate change, and food security. I hope they have a better plan. Stay tuned.

To find out more about GMO and pesticide-dependent industrial agriculture, see Food, Inc.":


Approximately 10 billion animals (chickens, cattle, hogs, ducks, turkeys, lambs and sheep) are raised and killed in the U.S. annually. Nearly all of them are raised on factory farms under inhumane conditions. These industrial farms are also dangerous for their workers, pollute surrounding communities, are unsafe to our food system and contribute significantly to global warming... 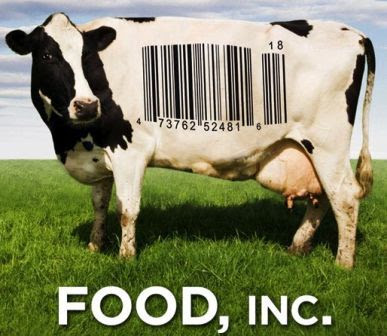 Some of our (U.S.) most important staple foods have been fundamentally altered, and genetically engineered meat and produce have already invaded our (U.S.) grocery stores and our (U.S.) kitchen pantries...

In January 2008, the FDA approved the sale of meat and milk from cloned livestock, despite the fact that Congress voted twice in 2007 to delay FDA's decision on cloned animals until additional safety and economic studies could be completed...

Cancers, autism and neurological disorders are associated with the use of pesticides especially amongst farm workers and their communities...

Approximately 1 billion people worldwide do not have secure access to food, including 36 million in the US. National and international food and agricultural policies have helped to create the global food crisis but can also help to fix the system.