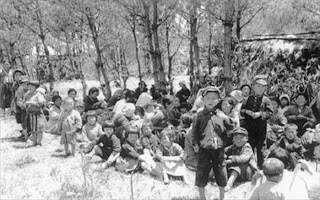 Child survivors made homeless by the 4/3 Jeju Island massacre, May 1948.
Photo: The Asia Pacific Journal 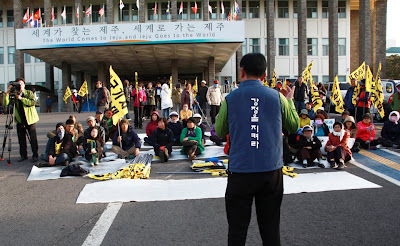 Via Regina Pyon:" In front of Jeju provincial government building...Gangjeong villagers and their supporters have engaged in a sit-in since March 26, 2012, protesting the explosive blasting of their farms, homes, and coastline that the S. Korean government seized (without due process). The Jeju Governor demanded a halt of the destruction, but Seoul ignored him. Mayor Kang is speaking; the sign on his back says "Let's Save Gangjeong." Image: Photo diary of Gangjeong by director Cho.

The ongoing conflict between the South Korean government and Jeju residents over state seizure of private property and forced construction of a nuclear naval base on Jeju Island has opened unhealed decades-old collective psychological trauma from the 1948 state massacre of most of the island's inhabitants.

From August 15, 1945 to August 15, 1948, the U.S. Army Military Government (USAMGIK) was the sole legal authority in Korea south of the thirty-eighth parallel. (Under secret protocols, the U.S. also had operational control of the South Korean armed forces and national police from August 15, 1948 to June 30, 1949.) Similarly to previous Japanese colonial rule, South Korean security forces under U.S. jurisdiction brutally repressed Jeju Islanders who protested horrific living conditions and political subjugation, including the U.S.-sponsored "South only" elections to be held in May, 1948.

When protests escalated into a popular uprising, security forces retaliated with mass killings and destruction of homes and villages on April 3, 1948. Peace Island, a journal published by Jeju University's Institute of Peace Studies, described conditions across Jeju in the 1940's:


...struck by infectious diseases, years of famine, lack of basic foods, and a high unemployment rate.


Most people know that this hauntingly beautiful island earned UNESCO World Natural Heritage status, but what fewer know is the fact that, after the 1950 Korean War, April 3, 1948 was the largest massacre in Korea's modern history. Scars of the onslaught are omnipresent on the island. Oreum seen everywhere on Jeju are not only secondary volcanic cones, but are also often the graveyard of many souls.

More than half of Jeju Island's villages were destroyed and between 30-60,000 people killed. 40,000 Jeju Islanders sought refuge in Japan; survivors, descendants, and family members still live in Osaka's "Jeju Town." (Osaka-born novelist Kim Suok Puom, whose family originated in Jeju Island, explored human and historical contexts of the uprising and massacre in his novel, Volcano Island.)

University of Chicago historian Bruce Cumings revealed details of the 1948 Jeju massacre in a paper presented at the 50th Anniversary Conference of the April 3, 1948 Chejudo Rebellion, Tokyo, March 14, 1998: '"The Question of American Responsibility for the Suppression of the Chejudo Uprising", concluding:


The primary cause of the South Korean insurgency was the social inequity of land relations and the huge gap between a tiny elite of the rich and the vast majority of the poor. The North Koreans were barely involved, and indeed the strongest leftwing regions were precisely those furthest from the 38th parallel.

But on Cheju Island these same conditions were inflamed by a brutal Japanese occupation that led to a vast uprooting of the population, the simple justice of the popular administration that took effective power on the island in 1945 and held it until 1948, and the elemental injustice of the mainlander dictatorship that Syngman Rhee imposed and that the American legal authorities did nothing about--except to aid and abet it.

If it should come to pass that any Koreans succeed in gaining compensation from the American Government for the events of 1945 to 1953, certainly the people of Cheju should come first. For it was on that hauntingly beautiful island that the postwar world first witnessed the American capacity for unrestrained violence against indigenous peoples fighting for self-determination and social justice.

For decades afterwards, the South Korean military dictatorship silenced any mention of the 3.4 killings on Jeju Island. However after President Rhee resigned following the April 19, 1960 Student Uprising, surviving families began to speak out. Kim Dong choon explains in "The Truth and Reconciliation Commission of Korea: Uncovering the Hidden Korean War" published at The Asia-Pacific Journal on March 10, 2010:


The Jeju April 3 incident of 1948 occurred shortly before the first general election, and was unique in the number of victims, and the lasting effect on the Jeju Island. Embedded in a strong collective regional identity, the Jeju people’s tragedy became a popular theme for novels and poems.

...the Jeju Incident succeeded in drawing the active support of intellectuals and activists and received wide local media attention. Its historical importance in the road to the establishment of the divided governments in the Korean peninsula and the strong sense of collective victimization of Jeju people contributed to making it a national agenda after democratization. The transformation of the political and ideological landscape conditioned by democratization, along with supporters petitioning for reconciliation, emboldened the surviving families to divulge their stories.

Scholars and journalists have confirmed that most of the victims of the Incident were innocent civilians, whose stories are now told in the April 3 Peace Park and Memorial Museum which opened in 2008... 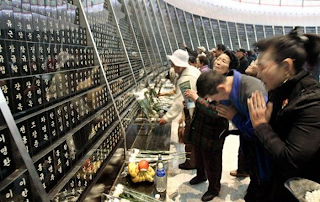 Prayers at the wall inscribing the names of the estimated 30,000 Jeju victims in the Jeju Peace Memorial Park. Photo: The Asia-Pacific Journal

The Jeju committee also completed its investigation and began preparing for reconciliation. However, doubts remain as to whether the Jeju committee can fully reveal the truth of the Jeju Massacres and and identities of the victims.

The most sensitive investigation has involved the role of the U.S. military during counterinsurgency operations against rebel forces. While the final report failed to confirm or spell out a U.S. role, it concluded that 86% of the 14,373 deaths reported were committed by security forces including the National Guard, National Police, and rightist groups.

In 2000, Seoul passed a Special Law to investigate and report the truth of what happened at Jeju Island in 1948. A final law, "Restoring the Honor of the Victims," was enacted to restore the honor of victims who had long been branded communists. Since 2005, Jeju has been described as "Peace Island." On April 3, 2006, President Roh Mu‐hyun visited Jeju and officially apologized for the abuses perpetrated by the previous government and expressed his condolences to victims and their descendants still living on Jeju Island. 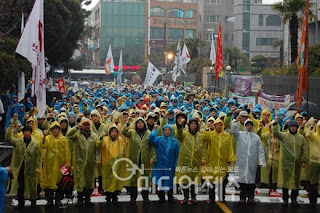 Sung-Hee Choi on the April 3, 2011 march in Jeju City: "The island-level memorial ceremony, Jeju 4.3, was held in pouring rain at the Jeju Peace Memorial Park at 11 am, April 3. Despite the criticism of Jeju Islanders, President Lee Myung-Bak did not come and instead the prime minister came who made clear the government’s will to forcefully drive the naval base construction in the Gangjeong village, to the fury of the villagers...Film critic Yang Yoon-Mo said that 4.3 was special for him because one of his grandmother’s brothers had been one of the first victims of police killings during the March 1 independence protest in 1948, which developed into the Jeju uprising on April 3, 1948. He expressed his resolute decision to fight against naval base construction which can be called as the second 4. 3. Many people resonated to his remarks." Photo: Media Jeju via No Base Stories Korea.

Now the Lee administration is undoing the long-overdue redress and historical healing. In 2010, Seoul forcibly removed (without due process) the villagers of Gangjeong, on the island's southern coast from their privately owned farms and homes. This year, the South Korean military and two military-industrial companies, Daelim and Samsung, began explosive demolition of this property and the most beautiful coastline in Jeju, an environmentally protected biosphere, soft coral reef, and South Korea's only natural dolphin habitat. Seoul has sent tens of thousands of miitary police to violently suppress the nonviolent resistance of the Gangjeong villagers, environmentalist and peace activists, and the Christian and Buddhist clergy who support them. 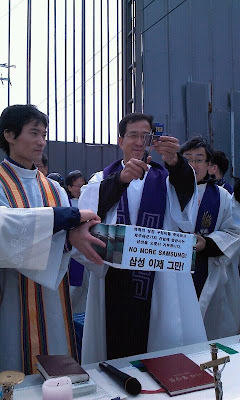 Via Save Jeju Island: "After the Catholic mass at the gate of Jeju military base construction site on April 3, 2012, priests are cutting up a SAMSUNG [corporate driver of the seizure & destruction of Gangjeong farmland] credit card. . . 'No more SAMSUNG.' Yesterday Bp. Simon Ok Hyun-jin, Auxiliary Bishop of the Gwangju Archdiocese, officiated a Catholic mass at the gate of Jeju millitary base site on April 2. About 80 Catholic priests from mainland particpated in the mass including Fr. Chun Jong-hoon, representative of Korean Catholic Priests' Association for Justice."

In so doing, President Lee has resurrected the undemocratic, militaristic practices of South Korea's postwar dictatorship and reopened the wounds of April 3, 1948. As in 1948, Indigenous residents of Jeju Island and their supporters are again fighting for self-determination, democratic process, and the right to a peaceful existence. They are also fighting for their land, sea, and livelihoood at Gangjeong Village. Many say they are also fighting for the soul of South Korea. 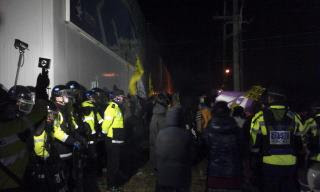 Via Paco Booyah: "Right now [4.3.2012] in Gangjeong. Standoff between the police and a group of Presbyterian pastors. For more than four hours on a very cold windy day and still ongoing. At the end of a march, the pastors began to break the illegal wall surrounding the illegal base and keeping everyone from their free and rightful access to Gureombi. Earlier this week, the police violently assaulted Pastor Song Young Seop [jumped, kicked by police]. Since that time we have demanded an apology for this excessive violence. The pastors said they will stay here and also break the wall until there is an apology or until they are all arrested."
Posted by TenThousandThings at 12:00 PM
Email ThisBlogThis!Share to TwitterShare to FacebookShare to Pinterest
Labels: democracy, Korean Peninsula, peace, Save Jeju Island