Mikami Chie's The Targeted Village will be showing at the Yamagata International Documentary Film Festival on Oct. 12 and Oct. 15, 2013.

The film follows Okinawan opposition to the construction of U.S. military V-22 Osprey low-level flight training helipads near the eco-village of Takae, located in a well-preserved area of Yanbaru, a subtropical rainforest in the northern part of the main island.

The US military appropriated land in Yanbaru during the 1950's "Bayonets and Bulldozers" period of base expansion throughout Okinawa, when US readied Okinawa for Vietnam War training and support.  The biodiverse subtropical rainforest, now a World Heritage Site candidate, was (and is) used  by US Marines for "jungle training." Locals were made to dress like Vietnamese people, for war games.

Residents have been protesting V-22 Osprey helipad construction since the plans were announced in 2006.  WWF Japan details unique and endangered wildlife, plant life and a gentle way of life under threat.


Subtropical natural forest and mountain stream remain, and the area provides habitats for over 4,000 species of wildlife. 11 animals and 12 plants are peculiar to the Yanbaru area. A large number of Threatened Species are listed in the Red List, 188 species in Okinawan Red List, and 177 in the Red List of Environment Ministry...

Takae has as many as 157 inhabitants, of them 14 people are elementary and junior high schoolers and 11 people are preschooler. They live freely and vivaciously in the environment of great biodiversity. Takae is seemingly moderate, yet there is a U.S. military base just like everywhere in Okinawa. In our daily life, helicopters crisscross overhead of our settlement, right next to the schoolhouse in the middle of class, morning, noon, and night with a loud noise.


People in the audience who came to know the issue of Takae, which has received little attention from the Japanese major news media, gave their thoughts. One said, “I didn’t know that the role of media had stopped to the extent that it has.” Mikami said, “If people see the children of Takae in tears in the film, they will no longer say that they want to uphold Japan-U.S. Security Arrangements if that is the result.” She continued, “People will change their minds for sure when they come to know what is going on at Takae.”

...Mikami said, “Through this film, I would like people to think about who it is who makes the children of Takae cry.” 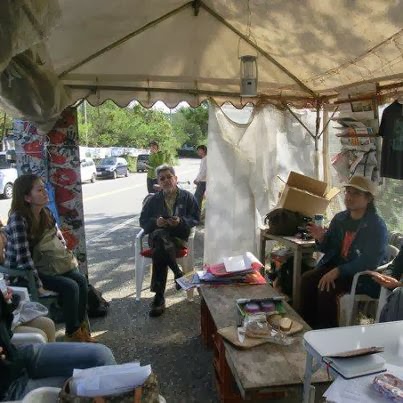 The film also spotlights last year's historic all-prefectural opposition to US Marines' forced deployment of the accident-prone Osprey aircraft to Futenma, a base in the middle of Ginowan City, Okinawa for low-level testing and flight training.

In late September, Okinawans blocked two gates at the Futenma (a weapons testing and war training base) during their third day of mass protests over Osprey training in Okinawa.  (The land on which Futenma was constructed was also forcibly appropriated by the US military in the postwar period. The owners of homes, stores, schools, and rice fields which made up several small farming villages were forced off their property at gunpoint; bulldozers were sent in in the middle of the night to raze homes and other private property.) 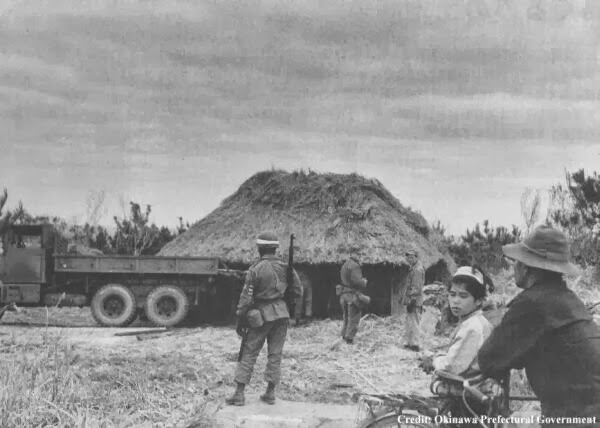 Between 1954 and 1955, US military forced owners from homes and rice farms
in the former village of Isahama, to make way for the construction of  Futenma,
a training base and launchpad for the US war in Vietnam.
(Photo: Okinawan Prefectural Government) 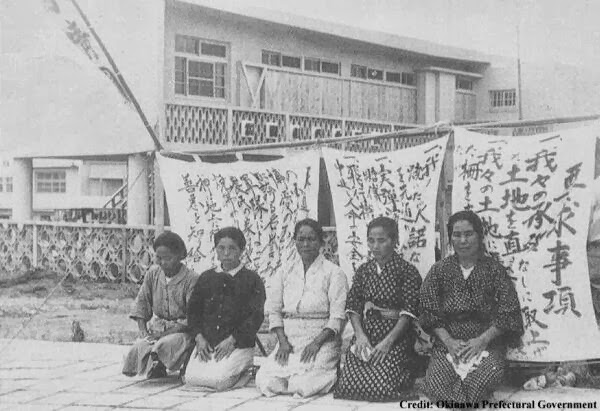 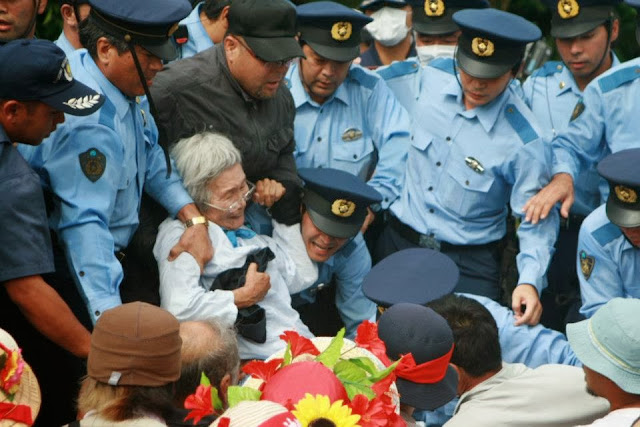 
Okinawans oppose the MV-22 Osprey, not just because they are dangerous. We are also expressing our anger against the denial of our lives, our dignity, and our democracy, throughout history, and we are also voicing our determination so that such treatment of our people will not be repeated. If we allow this, we will be allowing such injustice to be inflicted on our children and grandchildren, and people in other regions of the world. 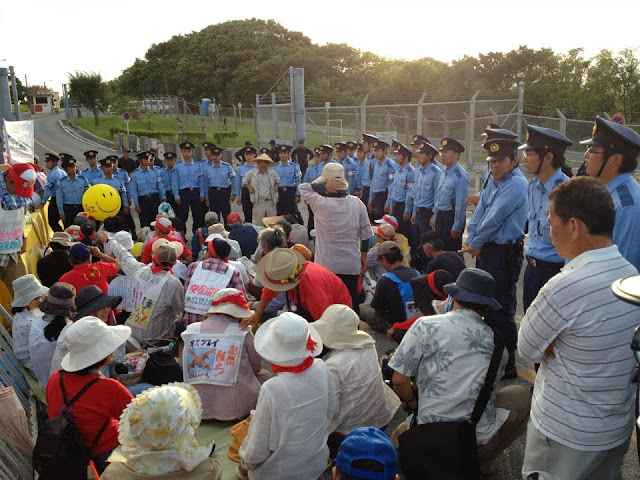 Late September 2012 sit-in protest against forced US military low-level
testing and training of  accident-prone V-22 Osprey aircraft at Futenma,
built on seized Okinawan property, for training and as a launchpad for the US war in Vietnam.
(Photo: Rev. Natsume Taira)

In Eastern Europe back in '89 there was a point of no return. It was passed. Hollowed out, the system soon collapsed, but nobody realized till Berliners actually took to the wall. The live links from Futenma are all but unbearable to watch. But it is our history. It is the lone protester in Tiananmen for our times. The citizens of a core region of the democratic world are rising and the world does not want to know.