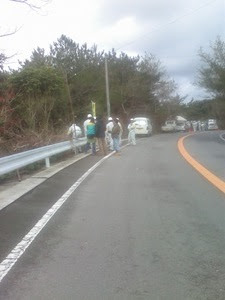 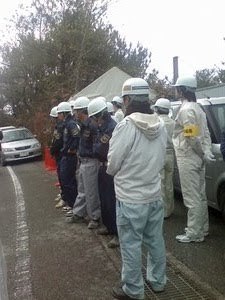 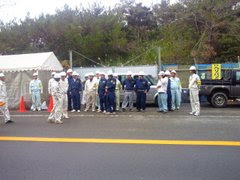 Construction workers left with nothing to do after citizens block construction site.

(Above photos courtesy of The Situation in Takae Higashimura and Yanbaru Forest website (Japanese).)

According to latest reports from The Network for Okinawa, a U.S.-based grassroots network that draws together representatives from peace groups, environmental organizations, faith-based organizations, academia, and think tanks:

These new helipads, where the U.S. wants to train Marines in the use of heavier, noisier, and dangerous MV-22 Osprey aircraft, would (if built) endanger the lives of local residents and irreparably destroy the pristine and biologically rich Yanbaru Forest in northern Okinawa.

On Feb. 1, several dump trucks and 50-60 workers threw bags of gravel over the fence at multiple entry points of the U.S. Marine Northern Training Area (a jungle warfare training ground used to test napalm during the U.S. war in Vietnam).

However, the Okinawan Citizens Defense Force (a pro-democracy and peace group) is engaging in nonviolent means to obstruct unapproved military construction. 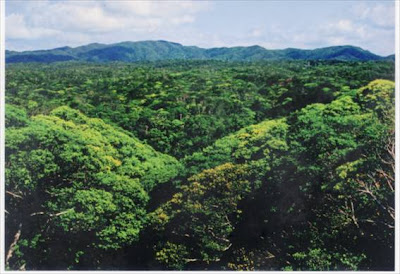 Takae's lush forest where Tokyo wants to construct of six helipads (diameter of 75 meters each) for U.S. military V-22 Ospreys. Over 192 plant and animal (most are endangered) species are unique to this area. (Photo: Yoshio Shimoji)

More information and photos of the non-violent action can be viewed at Peace Philosophy Center.

New petitions and pamphlets in English and Japanese are also available.

For background information on the movement to protect Takae Village and the biodiversity of Yanbaru Forest, see "Voice of Takae;" WWF's "No Military Helipads in Yanbaru Forest"; Jon Mitchell's "Postcard from Takae," published at Foreign Policy in Focus; "Saving the Okinawan Woodpecker," posted at The Center for Biological Diversity; and these past TTT posts:

Save Takae Village and and the biodiversity of Yanbaru Forest (Jan. 4, 2011)