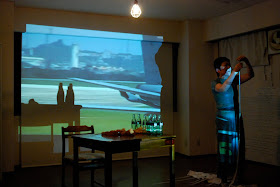 This past Saturday, in a compact event space in Tokyo’s Waseda district, performance artist Tari Ito climbed atop a chair and slowly unfolded a small cardboard box. A solemn expression on her face, she began rhythmically shaking the box back and forth, slowly at first and then gradually faster, the nails spilling out in a cascade of showering steel that soon reached a furious crescendo. After the box was emptied, she began crawling around on the floor to collect the nails with a large magnet, occasionally interrupting herself to pick up some of the nails with her teeth and spit them aside.

Ito’s subsequent actions were no less startling. Rubbing two glass Coca-Cola bottles together in a screeching cacophony, she then began drinking from similarly shaped rubber versions that were filled with water, soaking the entire front of her shirt in the process. With footage of U.S. military airplanes projected onto the wall behind her, she next began blowing up the rubber bottles like balloons (or condoms?) before turning to frenziedly slurp the water directly off the table.

Once again becoming somber, Ito turned to begin carefully laying down small T-shirts onto the floor, which she then affixed to the ground using tape covered with handwriting. Silently reading to herself before ripping off each piece, her expression conveying deep concern and pain, she then shared with the audience several examples of what she herself had written on the tape: the details of individual crimes committed by U.S. military personnel against women in Okinawa.

As she had done previously with the nails, Ito then began painstakingly gathering up each piece of tape, until each individual story of human suffering had been swallowed up as unrecognizable pieces of the larger narrative. 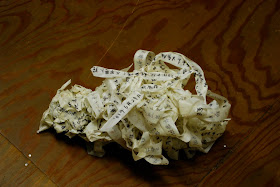 "When I performed several years ago at a museum in Okinawa, where I was positioned directly in front of an image depicting the battle that had taken place there during World War II, I became so overwhelmed that I
later had no recollection of anything other than the very beginning and end of the performance," she shared with the Tokyo audience in a talk session following Saturday's show. “It was almost like I had blacked out mentally.”

Ito, who has performed various works on social themes including gender, sexuality, and war for the past several decades across Asia, Europe and the Americas, said the following in an artist statement about Saturday’s performance, which is titled “One Response”:


The theme of my performance is the existence of survivors of sexual violence, who have been treated as non-existent. By sexual violence I mean that which has been conducted under military regimes, and by survivors, I mean women who were forced into military rape camps called “comfort stations” by Japan’s Imperial Army between the late 1930s through 1945 as it expanded its military front all over Asia. Following Japan’s surrender, Okinawa was occupied by the U.S. dictatorship until 1972, and a large part of its land has been continuously retained by the U.S. military to date. The survivors I am referring to also include the numerous people who were raped by military personnel stationed in those U.S. bases.

The systematic crimes of the Japanese military, and those committed by American soldiers, have significantly different meanings. They are also similar, however, in the sense that war makes people insane. These crimes are also not different when we consider the fact that soldiers of both armies have sexually assaulted women and children in random attacks, including all-too-often incidents of murder. Many of these survivors have had their integrity torn apart, and have remained unable to express what happened to them. They have been traumatized and deprived of their lives.

While living in contemporary Japanese society, I have witnessed the denial of the past existence of “comfort women,” or Japanese military sexual slaves. Descriptions of this system have been deleted from students' history textbooks, and a flock of right-wingers recently disrupted a panel exhibition organized in Tokyo by a civil group on this issue. Similarly, I have also witnessed the abandonment of human rights of people in Japan by the Japanese government, as the Japan-U.S. Status-of-Forces Agreement withholds their right to bring lawsuits against crimes committed by U.S. service members in Japan.

To act against the huge power behind these incidents of sexual violence, I often doubt whether the expression of performance art can really make a difference. But still, I continue. I am unable to ignore this issue, and I continue to have faith in the possibilities of performance art.

I believe that Japanese people, women in particular, have a responsibility to bring about a political resolution regarding the issue of sexual enslavement by the Japanese military. We must demand that our government apologize and pay reparations, as the victims have been demanding for years. Second, we must work to ensure that such wrongdoings are never repeated.

Whatever the form of violence—whether it is domestic violence in everyday life, or frequent occurrence of sex offenses by the US military personnel in Japan—it is not an exaggeration to say that as long as we do not resolve the problem of wartime sexual enslavement by the Imperial Army in the past, we are in fact allowing the causes of violence against women to prevail. Existing discrimination against women continues to be justified because people lack adequate human rights consciousness.

In order for Japan to mature as a nation, this situation must be resolved. 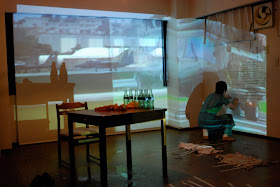