Emergency Appeal to Hatoyama: Listen to the Voices of the Okinawan People! 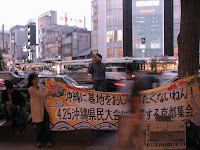 Today Kyoto Action held an emergency appeal to Prime Minister Hatoyama--urging him to listen to the voices of the Okinawan people.

Kyoto Action members gathered in front of Takashimaya Department Store in the busiest shopping district in Kyoto and distributed flyers about Hatoyama's trip to Okinawa, his first trip to the island prefecture since taking office. Although Hatoyama previously promised he would not permit the construction of new bases in Okinawa, he has since done an about face: proposing the construction of a new base on Tokunoshima island and also the expansion of Camp Schwab in Henoko.

The site Kyoto Action chose is the most difficult place in Kyoto to distribute information. Most passersby are preoccupied with shopping and tend to ignore protesters. However, today it seemed as though Kyoto Action members were handing away free newspapers. People approached them first--asking for more information about the situtation in Okinawa--rather than the other way around. Members succeeded in passing out 450 flyers with the following information in only an hour:

“We don’t need military bases!” rang the voices of over 90,000 people who participated in the Prefecture-wide rally on April 25th. Okinawan citizens raised their voices, demanding that Futenma, known as the world’s most dangerous military base, be returned to the Okinawan people, and that plans to move bases to other places in Okinawa such as Henoko or White Beach, be cancelled. According to a census, over 90% of Okinawa prefecture residents are opposed to the relocation of bases. 75% of US bases in Japan occupy Okinawa. We can not allow any more bases to be pushed on Okinawa and the lands which the bases occupy must be returned to Okinawa at once.

Ever since the Liberal-Democratic Party decided on a plan to relocate the Airfield at Futenma to Henoko 13 years ago, there have been movements in Okinawa in opposition. Why must yet another military base be built in Okinawa? While emphasizing how dangerous Futenma Air Field, they want to build another one in Okinawa? This irrational plan is what the LDP was trying to force onto Okinawa. Yet, despite pressure to accept the plan, the Okinawan people relentlessly struggled against it, and eventually the Henoko plan was retracted.

However, PM Hatoyama, while saying he will not build another base in Okinawa, is resurrecting the idea of constructing bases in Okinawa again after being denied by the U.S. government. These proposals are practically the same as the LDP’s.- to create a base off the shore from Henoko or at White Beach. This will end up destroying nature and building yet another dangerous base in Okinawa. This is absolutely ludicrous. “We are going to build a base even if Okinawans oppose it.” This seems to be the opinion of some members within the Democratic Party of Japan. We should not be listening to the U.S. government any longer. Isn’t it the voices of the Okinawan people who have been suffering under the pressure of the bases for 65 years since the end of the war whose voices need to be heard? We must join together and oppose the bases in Okinawa!

Today, after meeting with Governor Hirokazu Naikama, a pale-faced Hatoyama dressed in a yellow, short-sleeved Okinawan print shirt, told members of the media at a press conference that he owed an apologies to the Okinawan people for causing them to suffer while searching for a solution and asked for the Okinawan people's understanding in his inability to relieve the burden of the bases.

For a previous TTT posts about Kyoto Action, click here for a summary of the group's action and here for information about the April 25th Solidarity Demonstration and a video.