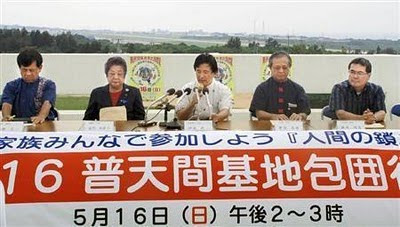 Okinawans are readying for a 13-kilometer human chain in the latest demonstration of their fourteen-year demand for the closure of Futenma Air Base and for no more military base construction on Okinawa.

Saturday marks the 38th anniversary of Okinawa’s return to Japan by the United States. Okinawans expected that the 1972 "reversion" would result in the closure of U.S. military bases throughout their island. They've been protesting on the anniversary since then. Tens of thousands of Okinawans are expected to participate in the annual Peace March that begins Friday in northern Okinawa and ends Saturday afternoon at a rally in Ginowan Seaside Park.


The Japanese government plans to build a pile-supported runway in the coastal area of US Camp Schwab in Nago city, Okinawa. It also hopes to move Futenma's helicopter unit to Tokunoshima island, in Kagoshima Prefecture.

The people of Ginowan and other municipalities accommodating US bases, together with peace activists, plan to surround Futenma Air Station with a human chain on Sunday to demand its removal.

The event's organizers are calling for more than 30,000 participants, as the air field has a circumference of 11.5 kilometers...

On Tuesday, the Okinawa prefectural assembly confirmed it would demand that the government continue efforts to move functions of the Futenma base out of the prefecture, or out of the country.

How have Okinawans maintained their zeal for freedom and democracy during the fourteen-years they've protested despite relentless authoritarian oppression by the U.S. and Japanese military-industrial-governmental-complexes?

It's because Okinawans have mojo: the positive and purposeful energy that flows from doing what's right. That's why and their millions of supporters worldwide are drawn to them and their cause.

Mark Harrison, of the United Methodist Church—when asked why they were supporting Okinawans, answered with one word: "Democracy."

Why have the U.S. and Japanese governments remained ossified in their Okinawan policy for fourteen years?

The U.S. and Japan are fixated in what historian Barbara Tuchman called a "mental standstill" in The March of Folly: From Troy to Vietnam, a study of the recurring pursuit by governments of policies contrary to their own interests. The cause is always the impotence of reason in the face of greed and moral cowardice. The result is always cynicism and a loss of citizens' trust in government:


In the first stage, mental standstill fixes the principles and boundaries governing a political problem.

In the second stage, when dissonances and failing function begin to appear, the initial principles rigidify. This is the period when, if wisdom were operative, re-examination and rethinking and a change of course are possible, but they are as rare as rubies in a backyard.

Tuchman concludes that "to recognize error, to cut losses, to alter course, is the most repugnant option in government." It is also the wise and effective route.

In both situations, the millions of people at the grassroots were right—just as are the local elders of Henoko, Okinawans across the island, and their millions of environmentalist, democratic, and faith-based supporters around the world are now right to steer the U.S. and Japanese governments away from destructive folly and towards flexibility and respect for democracy.

(For more information on the human chain and the Osprey aircraft (the noisy, crash-prone "Widow-maker") U.S. Marines want to bring to Yanbaru Forest and the Nago coast, read Martin Frid's comprehensive post at the Kurashi Blog.)

Posted by TenThousandThings at 12:00 AM
Email ThisBlogThis!Share to TwitterShare to FacebookShare to Pinterest
Labels: citizen action, democracy, Okinawa, peace