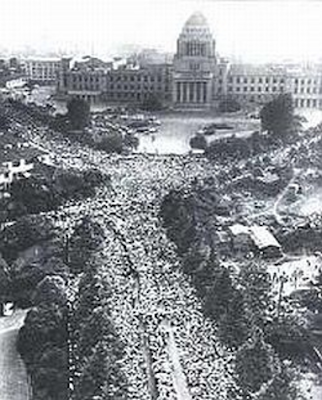 Hundreds of thousands of anti-ANPO protesters surrounding the Diet Building in 1960. (Image: JapanFocus.org)

Linda Hoaglund's ANPO: Art X War will have its world premiere at the Toronto International Film Festival on September 12. The Japan-born filmmaker said that her film "pulls way back to highlight the disturbing relationship between the U.S. military and Japan, almost exclusively through art."


The United States has operated military bases in Japan for six decades, since the end of the Second World War. Their presence has rubbed salt into unhealed wounds from the war, a complex trauma explored in ANPO. 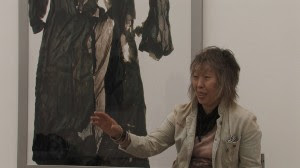 The title refers to the acronym for the US-Japan Mutual Security Treaty, negotiated in 1951. But ANPO is not a straightforward political documentary. Instead, Linda Hoaglund structures her film as a stream of consciousness, contemplating the Japanese healing process using paintings and photographs in lieu of traditional narration. By weaving together subversive, avant-garde Japanese art produced over the decades, she weaves past and present into one fluid interpretation of time and pain. 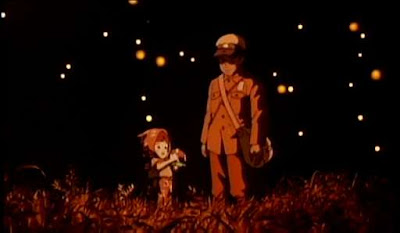 Stills of artwork, photography and segments of films – including Isao Takahata’s animated, anti-war drama Grave of the Fireflies – are intercut with their creators as a representation of a still-militarized Japan reeling from the psychic wounds inflicted by American occupiers. ANPO surveys the contemporary effects of ninety US bases in Japan and takes us back to 1960, when the majority of the protests took place. However, protests continue up until the present; the film includes protest footage in Tokyo from 2010. 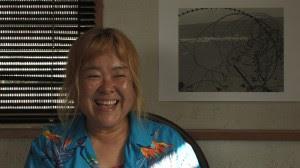 "ANPO" features Ishikawa Mao, an Okinawan photographer who began photographing when the 1970 demonstrations against the U.S. bases turned violent. For her most recent series, "Fences, Okinawa," she walked around and photographed all the base fences in Okinawa. (Photo: ANPO website)

One artist paints the story of a woman who was shot and killed while scavenging shell casings on the fringes of a US base. Another young artist’s illustrations explore the idea of kimin, which she defines as “a country abandoning its people.” Yet another artist uses her work to come to terms with the role of “comfort women,” who were used as “a sexual breakwater to protect Japanese women” from being raped by Allied soldiers. Pain has many outlets; seeing it crafted into moving and visceral art can be devastating.

Charting creative impulses born of hardship, ANPO is a poetic rumination on how artists respond to a nation’s trauma.