Peace and Human Rights in Palestine - the Occupation as witnessed by Anna Baltzer @ Kyoto, Tues, Nov 16 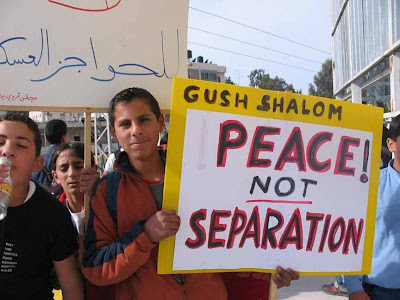 Anna Baltzer serves as the voice of the voiceless. The granddaughter of a Holocaust survivor, and a Jewish-American human rights activist, she speaks on behalf of the Palestinians and Israelis alike searching for a peaceful solution to the war and aggression confronting the people living in Occupied Palestine and Israel. As part of a speaking tour throughout Japan, this Tuesday, November 16th, Anna will address an audience at Kyoto University about the occupation of Palestine and the search for peace and respect for human rights in the region.

Anna writes on her blog about how she first learned of the Palestinian Occupation:


Like many Americans and many Jews, I grew up with a positive view of Israel as a peace-seeking democracy. Israel symbolized to me the one protection that Jews had against the type of persecution that had plagued families like mine throughout history. I saw the Jewish state as a tiny and victimized country that simply wanted to live in peace but couldn’t because of its aggressive, Jew-hating Arab neighbors.

In 2003, during a backpacking trip through the Middle East, I began to meet Palestinian refugees from 1948. I didn’t know who the Palestinians were, or where Palestine was, and through my new acquaintances I began to hear a narrative about the history and present of Israel/Palestine that was entirely different from the one I had learned growing up in the United States.

My first reaction was disbelief, and anger. Families told me stories of past and present military attacks, house demolitions, land confiscation, imprisonment without trial, and torture. It seemed that these actions were not carried out for the protection of Jewish people, but rather for the creation and expansion of a Jewish state at the expense of the rights, lives, and dignity of the non-Jewish people living in the region. It was hard for me to believe that Israel could act so unjustly.

Not believing what I heard, I decided to do some research to prove myself right. Immediately, I was shocked to find how much I didn’t know about the situation on the ground. Not knowing who or what to believe anymore, I decided to go to see the situation with my own eyes. Since I returned, I’ve dedicated my life to informing fellow Americans and others about what I found, and what they can do to support a just peace for all peoples in Israel/Palestine.

After spending eight months as a volunteer with the International Women's Peace Service* in the West Bank, she has written countless articles about the Palestinian experience in Israel, and has detailed her experiences in her critically acclaimed photo reportage, Witness in Palestine (available for screening). She also supports the work of a the Palestinian group, Slingshot Hip Hop, who utilizes hip hop as a "tool to surmount divisions imposed by occupation and poverty."

Anna is not alone in her struggle for peace in Palestine. In fact, she is just one of many Palestinians, Israelis, Jews, Muslims, Christians, Americans, and other people from diverse backgrounds working for a peaceful solution. By working side-by-side with Palestinians and speaking out against the occupation, Anna gives us hope that there will one day arise a non-violent, peaceful solution that will allow the people in Israel and Palestine to live in peace with one another once again. She also gives us hope that the voices of the countless numbers of Jews and Christians and Muslims and peoples of all faiths working together to overcome the painful violence that characterizes the lives of people in Palestine and Israel, will be heard.

Registration - Advance registration is required at: anna.in.kyoto [at] gmail.com

★Please register in advance so handouts and brochures can be prepared
Brochure fee: 1000 yen

[Languages of event] English and Japanese (Japanese translation is provided)

★ Yoshida Minami campus is the south campus, on the opposite side of the road from the main campus with the famous clock tower. The closest entry point to the site is from the west gate of Higashiooji Street. Enter the west gate, go straight and then turn right towards the venue: a modern five-storey building. The venue is in the eastern side with glass facade on the first storey. The building houses the Graduate School of Human and Environmental Studies. Please check the map before visiting. An image of the building can be found here and here (the photograph of the building is on the right).