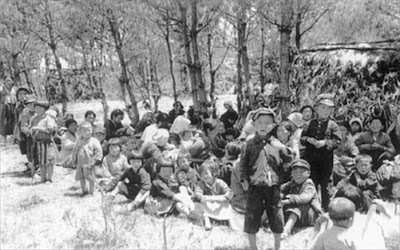 Child survivors made homeless by the 4/3 Jeju Island massacre, May 1948.
(Photo: The Asia Pacific Journal) 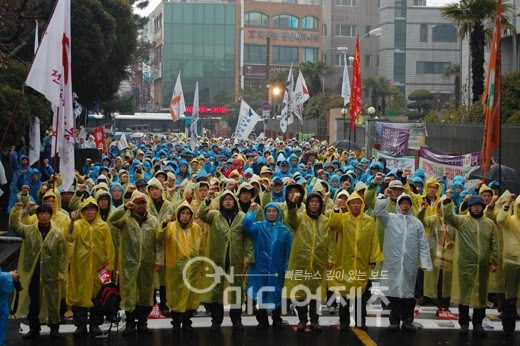 April 3, 2011 march in Jeju City against state seizure of homes and farms to make way for a naval base at Gangjeong. (Photo: Media Jeju via No Base Stories Korea)

The ongoing conflict between the South Korean government and Jeju residents over state seizure of private property and forced construction of a nuclear naval base on Jeju Island has opened unhealed decades-old wounds. Following brutal Japanese military rule, from August 15, 1945 to August 15, 1948, the United States Army Military Government (USAMGIK) was the sole legal authority in Korea south of the thirty-eighth parallel. (Under secret protocols, the U.S. also had operational control of the South Korean armed forces and national police from August 15, 1948 to June 30, 1949.)

Similarly to former Japanese military rule, South Korean security forces under U.S. jurisdiction brutally repressed Jeju Islanders who protested horrific living conditions and political subjugation, including the U.S.-sponsored "South only" elections to be held in May, 1948. When protests escalated into a popular uprising, security forces retaliated with mass killings and destruction of homes and villages on April 3, 1948. Peace Island, a journal published by Jeju University's Institute of Peace Studies, described conditions across Jeju in the 1940's:


...struck by infectious diseases, years of famine, lack of basic foods, and a high unemployment rate.


Most people know that this hauntingly beautiful island earned UNESCO World Natural Heritage status, but what fewer know is the fact that, after the 1950 Korean War, April 3, 1948 was the largest massacre in Korea's modern history. Scars of the onslaught are omnipresent on the island. Oreum seen everywhere on Jeju are not only secondary volcanic cones, but are also often the graveyard of many souls.

More than half of Jeju Island's villages were destroyed and between 30-60,000 people killed. 40,000 Jeju Islanders sought refuge in Japan; survivors, descendants, and family members still live in Osaka's "Jeju Town." ((Osaka-born novelist Kim Suok Puom, whose family originated in Jeju Island, explored human and historical contexts of the uprising and massacre in his novel, Volcano Island.)

For decades afterwards the South Korean military dictatorship silenced any mention of the 3.4 killings on Jeju Island. However after President Rhee resigned following the April 19, 1960 Student Uprising, surviving families began to speak out, according to Kim Dong choon in "The Truth and Reconciliation Commission of Korea: Uncovering the Hidden Korean War" published at The Asia-Pacific Journal on March 10, 2010:


The Jeju April 3 incident of 1948 occurred shortly before the first general election, and was unique in the number of victims, and the lasting effect on the Jeju Island. Embedded in a strong collective regional identity, the Jeju people’s tragedy became a popular theme for novels and poems.

...the Jeju Incident succeeded in drawing the active support of intellectuals and activists and received wide local media attention. Its historical importance in the road to the establishment of the divided governments in the Korean peninsula and the strong sense of collective victimization of Jeju people contributed to making it a national agenda after democratization. The transformation of the political and ideological landscape conditioned by democratization, along with supporters petitioning for reconciliation, emboldened the surviving families to divulge their stories.

Scholars and journalists have confirmed that most of the victims of the Incident were innocent civilians, whose stories are now told in the April 3 Peace Park and Memorial Museum which opened in 2008... 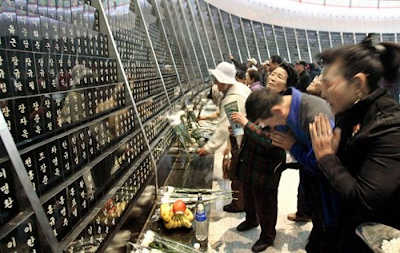 Prayers at the wall inscribing the names of the estimated 30,000 Jeju victims in the Jeju Peace Memorial Park. (Photo: The Asia-Pacific Journal)

The Jeju committee also completed its investigation and began preparing for reconciliation. However, doubts remain as to whether the Jeju committee can fully reveal the truth of the Jeju Massacres and and identities of the victims.

The most sensitive investigation has involved the role of the U.S. military during counterinsurgency operations against rebel forces. While the final report failed to confirm or spell out a U.S. role, it concluded that 86% of the 14,373 deaths reported were committed by security forces including the National Guard, National Police, and rightist groups.

In 2000, Seoul passed a Special Law to investigate and report the truth of what happened at Jeju Island in 1948. A final law, "Restoring the Honor of the Victims," was enacted to restore the honor of victims who had long been branded communists. Since 2005, Jeju has been described as "Peace Island." On April 3, 2006, President Roh Mu‐hyun visited Jeju and officially apologized for the abuses perpetrated by the previous government and expressed his condolences to victims and their descendants still living on Jeju Island.

Now the Lee administration is undoing this long-overdue redress. By forcibly removing the villagers of Gangjeong, on the island's southern coast, and seizing ancestral land to construct a nuclear naval base against the villagers' democratically expressed and unanimous choice, Seoul has resurrected undemocratic, militaristic practices of South Korea's postwar dictatorship and reopened the wounds of April 3, 1948.


The island-level memorial ceremony, Jeju 4.3, was held in pouring rain at the Jeju Peace Memorial Park at 11am, April 3. Despite the criticism of Jeju Islanders, President Lee Myung-Bak did not come and instead the prime minister came who made clear the government’s will to forcefully drive the naval base construction in the Gangjeong village, to the fury of the villagers.

A 4.3 documentary movie on the testimony of victims, Red Hunter, was screened at the village ceremony hall in the Gangjeong village in the evening. The Life and Peace Fellowship organized the screening event. Cho Sung-Bong, the director, talked about his personnel struggle against Lee Myung-Bak government’s river project being constructed in his hometown, Goorye, Jeolla province.

Film critic Yang Yoon-Mo said that 4.3 was special for him because it was one of his grandmother’s brothers had been one of the first victims of police killings during the March 1 independence protest in 1948, which developed into the Jeju uprising on April 3, 1948. He expressed his resolute decision to fight against naval base construction which can be called as the second 4. 3. Many people resonated to his remarks. 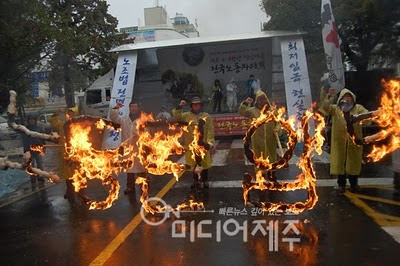 University of Chicago historian Bruce Cumings revealed details of the 1948 Jeju massacre in a paper presented at the 50th Anniversary Conference of the April 3, 1948 Chejudo Rebellion, Tokyo, March 14, 1998: '"The Question of American Responsibility for the Suppression of the Chejudo Uprising", concluding:


The primary cause of the South Korean insurgency was the social inequity of land relations and the huge gap between a tiny elite of the rich and the vast majority of the poor. The North Koreans were barely involved, and indeed the strongest leftwing regions were precisely those furthest from the 38th parallel.

But on Cheju Island these same conditions were inflamed by a brutal Japanese occupation that led to a vast uprooting of the population, the simple justice of the popular administration that took effective power on the island in 1945 and held it until 1948, and the elemental injustice of the mainlander dictatorship that Syngman Rhee imposed and that the American legal authorities did nothing about--except to aid and abet it.

If it should come to pass that any Koreans succeed in gaining compensation from the American Government for the events of 1945 to 1953, certainly the people of Cheju should come first. For it was on that hauntingly beautiful island that the postwar world first witnessed the American capacity for unrestrained violence against indigenous peoples fighting for self-determination and social justice.

As in 1948, Indigenous residents of Jeju Island are again fighting for self-determination, democratic process, and the right to a peaceful existence. They are also fighting for their land, sea, and livelihoood at Gangjeong Village.

I have lived on Jeju Island for eleven years. As an American, in 2000 I was approached by a grandmother who began yelling at me in a market, blaming me for killing her baby. This encounter caused my Korean wife to investigate the reason. My wife returned with a visibly shaken appearance. She told me, "Never go outside at night or go alone." When I asked her why, she just said,"It's not safe for Americans to be here on Jeju as a number of older people are angry with Americans."

In all the student reports, it was Americans troops trying to get Japanese loyal to the US to kill but in the end the vehement resistance of the Jeju Koreans to the Japanese left them at the hands of US troops, they began by just gathering villagers into school yards, and giving the ultimatum to "Join the U.S. or die." Not understanding English, being a people who had resisted outsiders before; among whom were Japanese invaders and earlier incursions by mainland Koreans, all were resisted. However, the Americans were not like Asians and simple took men, women, mothers, children and livestock and slaughtered them initially by shooting them down but the slaughter by shooting and burying in shallow mass graves turned out to be too slow for US motives; in turn, the began the faster and more barbaric method of torching entire villages then preventing the escape of anyone or any creature. Koreans were killed by massive cremation while in the villages; this is where the student's grandparents had their house spared as it was the biggest and served as a troop command post.

In part of Prof. Bruce Cumings, University of Chicago
Report, he had mentioned a US CIA agent who was witness to and shocked by the brutal mass grave execution method, that he exclaimed, "I can't believe this is happening!"

Thank you very much for sharing your personal experience with this tragic, shocking history...