The Asahi News' May 4 Wikileaks series reveal Tokyo-D.C. deception & fraud re their proposed U.S. Marine base in Okinawa 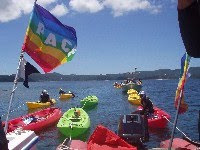 Okinawan peace and life activists resisting the destruction of a beautiful eco-system (habitat of the Okinawa dugong), by proposed U.S. military base construction at Henoko & Oura Bay. (Image: Save Life Society)

Here's a complete set of links to the complete set of The Asahi News' May 4, 2011 Wikileaks series revealing Tokyo-D.C. deception & fraud re the planned "Futenma Replacement" U.S. Marine base in Okinawa.


Between late 2009 and early 2010, a number of high-ranking officials of the Yukio Hatoyama administration told their U.S. counterparts that they would seek alternatives to the 2006 agreement to relocate Futenma to the Henoko district of Nago in Okinawa Prefecture. But they also secretly said that, in the end, Japan would go along with the 2006 agreement if the United States rejected the proposed alternatives.


Japan and the United States in May 2006 compiled a road map for realigning U.S. military personnel stationed in Japan. Under the plan, a provisional agreement was reached in December 2008 on the move to Guam that included the financial burden on each nation.

A diplomatic cable sent by the U.S. Embassy in Tokyo to the U.S. State Department that provided details on the negotiations explained that Japan's share was made to appear smaller with the inclusion of an unnecessary project costing $1 billion (81 billion yen) to construct a military road by the United States.

The cable also explained that the numbers of those to be moved to Guam was inflated to 8,000 Marines and 9,000 family members to "optimize political value" (of the agreement).

A diplomatic cable said that in 2006, there were "on the order of 13,000" Marines based in Okinawa. Okinawa prefectural government officials argued that the actual number was 12,000 and criticized the figure included in the relocation road map as an exaggeration.

Although the issue was taken up in the Diet, the government at the time refused to confirm the actual number of personnel to be moved. The cables back up Okinawa's doubts about the figures.

The Democratic Party of Japan-led government was not the first to make secret promises on the Futenma relocation issue that differed from official statements. Such discrepancies can be found in cables from the era of the coalition government between the Liberal Democratic Party and New Komeito.

The Japan-U.S. road map compiled in May 2006 included figures that differed from reality due to political considerations made by both governments.

Soon after Barack Obama became president, Secretary of State Hillary Clinton visited Japan in February 2009 and signed the agreement on the move of Marines to Guam with then Foreign Minister Hirofumi Nakasone.

At that time, the Japanese bureaucrats and the U.S. government wanted to create a legal framework that would require the immediate implementation of the Futenma relocation plan if the DPJ took over control of government following a Lower House election expected that year.

A "secret" cable sent by the U.S. Embassy in Tokyo to Clinton that provided an explanation before her visit to Japan said, "Japanese officials believe the agreement and the allotment of over $900 million in realignment funding during the next fiscal year will buttress Japan's commitment to the May 1, 2006, Alliance Transformation Agreement even if there is a change in government here."

"THE TRUTH BEHIND JAPAN-U.S. TIES (4): LDP ministers made secret promises to Okinawa governor on Futenma": http://www.asahi.com/english?TKY201105040067.html:


A "confidential" cable dated March 12, 2007, and submitted to the U.S. State Department from Kevin Maher, then consul general in Okinawa, said: "(Then Defense Minister Fumio) Kyuma then argued strongly that we need a fifty-meter revision in the FRF (Futenma Replacement Facility) plan in order to get Gov. Nakaima to agree to cooperate with the environmental impact assessment. I responded that we do not, and that to show any flexibility on this point is a mistake and a misreading of the situation in Okinawa."

Kyuma was forced to resign as defense minister in July 2007 after he said the U.S. atomic bombings in World War II could not be helped. Replacing Kyuma was Yuriko Koike, who served as Prime Minister Shinzo Abe's special adviser on national security issues.

However, Koike was also forced to step down two months later after a confrontation with Vice Defense Minister Takemasa Moriya over personnel decisions.

No longer defense minister, Koike nevertheless visited Okinawa in November 2007 and met with Maher at the Kanucha resort across the bay from Camp Schwab.

A cable classified as "confidential" and written by an official at the U.S. Embassy in Tokyo in place of Maher mentions a secret promise Koike had made with Nakaima.

The cable said, Koike "admitted that as minister she had given the governor an informal 'promise' that after the EIA (environmental impact assessment) is completed, Tokyo will agree to slide the runway 50 meters more toward the ocean."

According to the cable, Maher told Koike that the United States had an "aversion to revising the plan at all," asking her, "What happens if there were no scientific reasons resulting from the EIA to justify any revision to the runway relocation?"

The cable said Koike responded, "There will be a different administration by 2009, so it doesn't matter what we've promised him."

"THE TRUTH BEHIND JAPAN-U.S. TIES (6): Japanese bureaucrats also critical of DPJ government": http://www.asahi.com/english/TKY201105040069.html
Posted by TenThousandThings at 8:14 AM
Email ThisBlogThis!Share to TwitterShare to FacebookShare to Pinterest
Labels: Okinawa, Wikileaks