May 7, 2011 Okinawa Bitter Gourd Protest: “U.S. government itself is a ‘master of manipulation and extortion’” 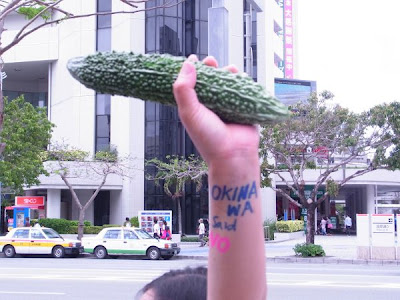 On May 7, Okinawans protested derisive remarks by Kevin Maher made public earlier this year. The U.S. State Department's former director of the Office of Japan Affairs called Okinawans "masters of manipulation and extortion" and described them as "too lazy to grow goya (bitter gourd), a vegetable widely grown throughout Okinawa.

About 200 people gathered at the public square in front of the Okinawa Prefectural Government office to demonstrate against Maher's remarks and Japanese Defense Minister Toshimi Kitazawa’s visit. 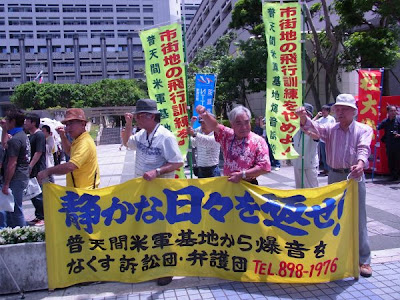 They held banners and signs:

•  “Give us back quiet days!" (Plaintiffs' Group for Futenma US Airbase Noise Pollution Lawsuit )

• “Deceptions plus Expedience = Henoko (new base)“

• “Take the US-Japan Military Bases back with you to Mainland Japan!”

•  Japanese (Mainlanders)! Military Bases outside Okinawa! It is the time to take bases in Okinawa to the mainland!“

•  We never allow base construction in Henoko”

• ”Close and Remove Futenma Airbase now. There is no place for US Military base”

Before the protest, an Asahi News explosive Wikileaks series exposing deceitful and fraudulent US-Japan machinations regarding Okinawa energized the entire prefecture. The Ryukyu Shimpo published an article retorting "U.S. government itself is a 'master of manipulation and extortion'":


Shikou Sakiyama, Chairman of the Okinawa Peace Movement Center, criticized both governments, saying, “I resent how the United States and Japanese governments have deceived the Okinawan people. Kevin Maher, former Director of Japanese Affairs in the State Department, was quoted as saying “Okinawans are masters of manipulation and extortion of Tokyo,” but those very same words apply to the U.S. government. The Japanese government, which has confirmed what Washington has done, is just as blameworthy as their U.S. counterparts. Japanese citizens should not tolerate what both governments have done.”

Shigenobu Arakaki, Chairman of the Okinawa Coalition, who had been suspicious about the veracity of the numbers of U.S. Marines being put forward, said, “both the U.S. and Japanese governments deceived Japanese citizens the same way as they did with secret pacts about the return of Okinawa, which clearly reflects how both countries have developed since World War II. Unless the people of Japan abandon the Japan-U.S. Security Treaty, we will not be able to establish our own sovereignty.”

Hiroshi Ashitomi of the Helicopter Base Objection Association insists that, “The Democratic Party of Japan insults Okinawa. They think that they can sacrifice Okinawa in order to lighten the load on the main islands of Japan. When deciding their future, the Okinawan people cannot expect anything from either the U.S. or Japanese governments. They must determine their own future.”

Mie Kunimasa, member of the anti-base women’s group, “Kamado guwaa no tsudoi” (“Meeting of the Kamados”), organized by housewives residing around Ginowan City, said, “The negotiations totally ignore the situation here. The Okinawan people don’t see the issue in terms of burden of expense or the number of military personnel; we simply ‘say no’ the existence of U.S. military bases in Okinawa. We need to keep raising the matter of the situation in Okinawa.”

On March 8, the Okinawa Prefectural Government adopted a "Resolution of Protest Over The Remarks made by Mr. Kevin Maher, U.S. State Department Director of The Office of Japan Affairs demanding that the former U.S. diplomat rescind his alleged remarks and apologize to the citizens of Okinawa Prefecture.

The Goya Protest has continued at Okinawa Goya Project 2011, a blog from Okinawa challenging Maher's comment that Okinawans are "too lazy" to grow goya. The site is an evidentiary record of goya grown in Okinawa.

(Japan Defense Minister Kitazawa met with Okinawa Gov. Nakaima on May 7. The talks didn't bring agreement on the Futenma issue any closer.

While Governor Nakaima made a 10 point-demand including the relocation of U.S. Marine Air Station Futenma outside Okinawa and the return of most of the facilities south of Kadena, Kitazawa insisted upon the destruction of Oura Bay to make way for another U.S. military base; saying otherwise there would be no progress. At this meeting, Kitazawa did not mention the most recent method the Japanese government has in mind for the destruction of Oura Bay, habitat of the federally protected and critically endangered Okinawa dugong (manatee).

(On May 8, Japan Defense Minister Kitazawa made his first visit to the Japan Self Defense Air Force Miyako island station and met with Miyakojima Mayor Shimoji. Kitazawa said would consider how Japan would defend the Sakishima islands and southernmost Japan in this fiscal year. When he returned to Naha, Kitazawa divulged at a press conference that he did not feel the negotiation with Nakaima was tough. He said that since he knows Nakaima’s character, "We had a very good talk.")