Terry Tempest Williams on living with radiation from the 1,000+ nuclear bomb explosions in North America 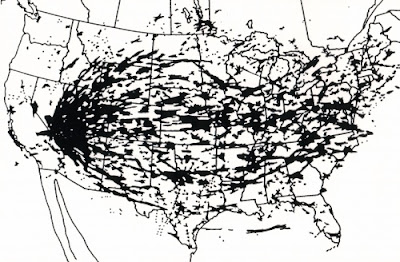 (Image: Richard Miller, “Areas crossed by two or more radioactive clouds during the era of nuclear testing in the American Southwest, 1951-62” in Under the Cloud: The Decades of Nuclear Testing (Two-Sixty Press, 1999))

When Terry Tempest Williams began her soul-searching chronicle that explores how her family, friends, and community members lived with the environmental, psychological and health consequences of the thousand nuclear test explosions in the American Southwest (most Southerners don't even know this, but Mississippi was also nuked twice), she felt unheard and unseen. Then she visited Hiroshima, and upon meeting other survivors of nuclear radiation, no longer felt alone.

Her 20-year-old memoir, Refuge, is more relevant than ever, after Fukushima. An excerpt from her last chapter, "The Clan of One-Breasted Women":


Over dessert, I shared a recurring dream of mine, I told my father that for years, as long as I could remember, I saw this flash of light in the night in the desert—that this image had so permeated my being that I could not venture south without seeing it again, on the horizon, illuminating buttes and mesas.

I stared at my father.

"I thought you knew that," he said. "It was a common occurence in the fifties."

It was at this moment that I realized the deceit I had been living under. Children growing up in the American Southwest, drinking contaminated milk from contaminated cows, even from the contaminated breasts of their mothers, my mother—members, years later, of the Clan of One-Breasted Women.

It is a well-known story in the Desert West. "The Day We Bombed Utah," or more accurately, the years we bombed Utah: above ground atomic testing in Nevada took place from January 27, 1951 to July 11, 1962. Not only were the winds blowing north covering "low-use segments of the population" with fallout and leaving sheep dead in their tracks, but the climate was right...

Much has been written about this "American nuclear tragedy." Public health was secondary to national security...

Again and again, the American public was told by its government, in spite of burns, blisters, and nausea, "It ihas been found that the tests may be conducted with adequate assurance of safety under conditions prevailing at the bombing reservations." Assuaging public fears was simply a matter of public relations. "Your best action," an Atomic Energy Commission booklet read, "is not to be worried about fallout."

...The fear and inability to question authority that ultimately killed rural communities in Utah during atmospheric testing of atomic weapons is the same fear I saw in my mother's body...

My father's memory was correct. The September blast we drove through in 1957 was part of Operation Plumbbob, one of the most intensive series of bomb tests to be initiated. The flash of light in the night in the desert, which I had always thought was a dream, developed into a family nightmare. It took fourteen years, from 1957 to 1971, for cancer to manifest in my mother—the same time, Howard L. Andrews, an authority in radioactive fallout at the National Institutes of Health, says radiation cancer requires to become evident...

One night I dreamed women from all over the world circled a blazing fire in the desert. They spoke of change, how they hold the moon in their bellies and wax and wane with its phases. They mocked presumption of even-tempered beings...