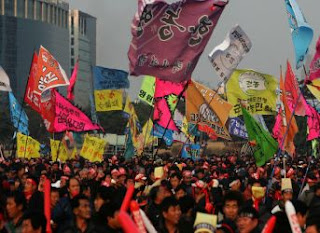 Martin Frid, who participated in an organic farming conference in Korea earlier this month, posted on the incredible amount of food that South Korea imports: 80-90%. Most of it comes from the U.S, followed by China.

This is by design and parallels political economic shifts in other countries. The South Korean government uses state policy to intentionally undermine small family farmers (and traditional landed culture), similarly to the U.S. in the 1970's and Japan in the 1990's (when the USTR forced Japan to open its previously fiercely protected rice market). The common agenda against family farmers in these countries (and elsewhere) was and is to enlarge markets and profits for global (especially US) agribusiness ("Food Inc".); alter traditional (local) food production in favor of neoliberal agricultural (plantation monoculture) food production; and to diminish the political influence of family farmers.

In "Crisis at Daechuri - the latest phase of the Korean War," which explores the back stories behind Seoul's forced, violent seizure of farmland to expand a U.S. military base in Pyeongtaek, Brian Mac Grath describes the long domestic war against Korean farmers:


The political activism of Korean farmers has long been a thorn in the side of the global agricultural industry and as such is consistently denounced by the media. After the Korean War, South Korean agriculture was sacrificed to enable industrialization to take place, with land nationalization less thorough and complete than it appeared on the surface.

US agribusiness has gradually gained total access to the South Korean agricultural market, with over half of Koreas food imports now coming from the US. The result could be the total disappearance of the small farmers who are the backbone of Korean agriculture. If the farmers of South Korea can be successfully defeated through the subtle warfare of international trade, and the less-subtle warfare of outright land seizure at Daechuri and Doruri, then Korean nationalism will of itself wither and die, as the South Korea industrial economy is increasingly absorbed into that of the US.

The destruction of South Korean agriculture is a vital stage in increasing the dependency of the peninsula as a whole upon the United States, given the disastrous condition of North Korean agriculture, as a result of flooding, state mismanagement, and international sanctions imposed by the US.

In-depth 2008 reports at Grain.org on U.S. agribusiness introduction of GMO foods into South Korea: "Food Safety on the Butcher's Block" and Daewoo's attempted immense land-grab in Africa for corn and palm oil plantations: "Korean women farmers on the Daewoo/Madagascar land deal" (The deal was rescinded in 2009 by the president of Madagascar who replaced the president who was forced from office (in part for outraging citizens by leasing half of Madagascar's arable land to Daewoo.))

Some background on petrochemical-intensive industrial agriculture from Fritjof Capra's The Turning Point:


Three million American farms have been eliminated this way since 1945...

The farmers who were able to remain on the land had to accept a profound transformation of their image role, and activities. From growers of edible foods, taking pride in feeding the world's people, farmers have turned into producers of industrial raw materials to be processed into commodities designed for mass marketing. Thus corn is converted to starch or syrup...it is not surprising that many children today grow up believing that food comes from supermarket shelves...

In this industrialized system, which treats living matter like dead substances and uses animals like machines, penned in feedlots and cages, the process of farming is almost totally controlled by the petrochemical industry...Nevertheless, a growing number of farmers have become aware of the hazards of chemical farming and are turning back to organic, ecological methods.