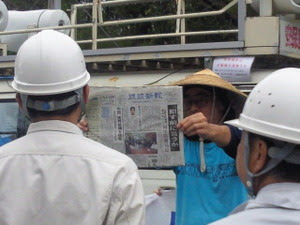 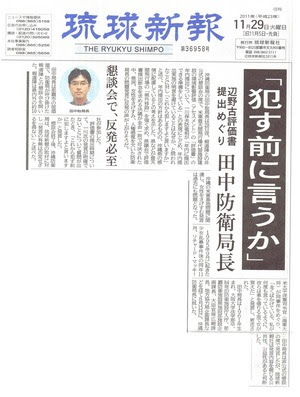 Recently the head of the Okinawan branch of Japan's Defense Ministry compared DC-Tokyo forced US military construction in Okinawa to "rape." For his transparent comment about US-Tokyo strategy, Satoshi Tanaka was fired yesterday.

Earlier this month, Tanaka moved ahead, despite local oppostion, with military construction in biodiverse Yanbaru Forest, a subtropical rainforest in northern Okinawa, Yanbaru, a habitat for unique, indigenous species, to make way for US military V-22 "Osprey" aircraft training and testing heliports.

The U.S. Marines, the manufacturer, and congressional representatives from the district in Texas in which the factory is located, have lobbied for years against the axing of the expensive, accident-prone military  aircraft from the U.S. defense budget. This Iron Triangle even beat out former Vice President Dick Cheney who argued against the program. Despite extreme costs, accident risks, and no strategic value for the aircraft, US Marines have pushed to build heliports for the Osprey aircraft in Okinawa since they need someplace to put them, according to some U.S. foreign affairs analysts.

As a result, residents of Takae, an eco-village in Yanbaru Forest, have been in a cold war with the U.S. Marines for years. Residents report assaults by U.S. military helicopters against civilian protesters. Some fly low to the ground, terrorizing villagers destroying their property, and damaging forest trees. One villager reported that a U.S. soldier demanded food, at riflepoint, while laughing at her. These are just a few reports that reflect the tip of an iceberg of accounts of U.S. military injuries and intentional infliction of emotional distress upon local people.

The pattern of U.S. military abuse of northern Okinawans is not recent, but historical. During the Vietnam War, the U.S. military forced Takae villagers to dress like Vietcong for war games. US troops sprayed toxic herbicides in the forest. For these Okinawans, U.S. military assaults upon Okinawan property and persons have been continuous from the Battle of Okinawa through the Vietnam War era to today:

Okinawa's two major newspapers, Okinawa Times and Ryukyu Shimpo reported at length on Tanaka's "injudicious remark"; Japanese newspapers called it "indiscreet." It might be better described as a Freudian slip.

More background information on the movement to protect Takae and Yanbaru Forest:

"Saving the Okinawan Woodpecker," (The Center for Biological Diversity).

Save Takae Village and and the biodiversity of Yanbaru Forest (TTT, Jan. 4, 2011).

More background on the V-22 Osprey:

"Key Amendments to H.R.1, Fiscal Year 2011 Appropriations Bill" compiled by The New York Times. (Congressman Luis V. Gutierrez (Democrat, Illinois sponsored an Amendment To Eliminate Financing for the V-22 Osprey Aircraft (H.AMDT.13). The House of Representatives voted (326 to 105, mostly Republican, but also Democrats) against this amendment; resulting in U.S. taxpayers footing the bill for at least $415 million for the V-22 Osprey aircraft this year. So far, the Osprey has cost Americans $60 billion.)