Korean Protest Culture: Struggle for Democracy — "still being negotiated, in parliament & on the street..." 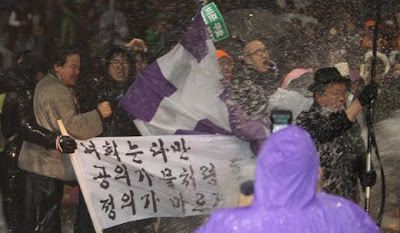 Citizens and students participating in a candlelight vigil demonstration against the South Korea-U.S. Free Trade Agreement (KORUS FTA) at Seoul Plaza attempt to march down street while police assault them with water cannons, Nov. 23, 2011. (Photo: The Hankyoreh: "FTA fallout") 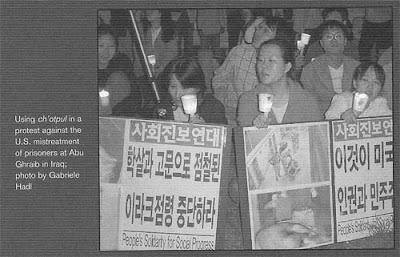 The Nov. 23 South Korean police assault on citizens during a candlelight vigil against the South Korea-U.S. Free Trade Agreement (KORUS FTA) in Seoul brings home the reality that South Korea has only been a democracy since the late 1980's. It took South Koreans decades of political and social resistance to overturn the U.S.-backed military dictatorship established after the Korean War that followed the even more notorious Japanese military dictatorship of the peninsula.

The Lee Myung-bak administration has attempted to turn back the clock and undo many of the democratic reforms of the 1990's. This, in turn, has given rise to an intensification of resistance: a part of everyday culture in South Korea. Engaged scholar Mark Selden, editor of The Asia-Pacific Journal, notes that South Koreans have created the most vibrant and sustained grassroots democratic movement in the Asia-Pacific, comparable only to the Okinawan movement in intensity, longevity, and creativity.


When I was a child in South Korea during the 1960s, we lived under the repressive dictatorship of Park Chung-hee. Anyone out after 10 p.m. curfew could be arrested. Anyone who tried to protest the government disappeared. A lot of people died fighting for democracy and human rights.

Today, the South Korean people carry in living memory the supreme struggles that forged the freedom they currently enjoy. And after all they’ve sacrificed, they are not going to give that freedom up.

In "Korean Protest Culture", a photo essay for the Kyoto Journal, Gabriele Hadl describes some of the many symbolic actions found in Korean social movements:

Downtown Seoul has more protest spots than coffeehouses. Protesters of many persuasions have taken up a permanent, rotating residency in front of the Blue House, South Korea’s presidential mansion, while the American embassy is never without riot police.

For most of the country’s history, demonstrations have been put down with an iron fist. In the 1960s, widespread protest won a three-year respite from dictatorship. Though short-lived, it piqued the hunger for democratic reform. Dissent then burned underground for two decades. Ultimately, the military regime could not contain it. In 1985, the struggle was reignited en masse, and a two-year protest campaign brought down the government. No velvet revolution here, but a series of powerful, sustained confrontations, culminating in a radical rewriting of the social contract. Its provisions are still being negotiated, in parliament and on the street...

A labor media activist reflects, “We separate action and daily life…go to a rally, then home. We have to integrate struggle into our everyday lives.”


...In fact, KORUS represents a major victory for U.S. multinational corporations, banks and financial institutions, which have lobbied intensively for the pact for more than half a decade. It’s also a major setback for Korean and American unions. Both (with the exception of the U.S. United Auto Workers) saw that KORUS, like NAFTA, was above and beyond an investment agreement designed to improve conditions and decrease risk for foreign capital while doing nothing to improve labor rights (dismal in both South Korea and the United States, as recognized by the Korean Confederation of Trade Unions) or lift the general conditions of workers and consumers in either country. Now that the AFL-CIO has failed to convince a Democratic president and Senate to oppose it, it remains to be seen if South Korea’s labor-led opposition can muster the strength to defeat the treaty in Seoul. We shall see...

The South Korean-U.S. free trade agreement (KORUS) cannot be seen apart from U.S.-South Korean security ties, the presence in South Korea of more than 30,000 U.S. troops and a 50-year economic relationship that has been heavily weighted towards American interests. From this perspective, KORUS is the fourth attempt by the United States to force its economic will on South Korea over the past half-century.