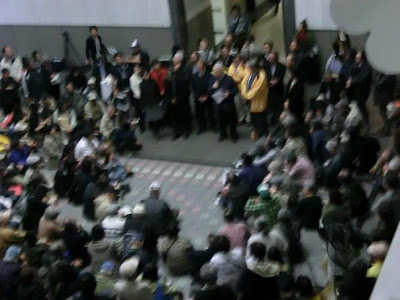 Scholar of East Asian history and politics Gavan McCormack has long compared the Okinawan movement to the Polish Solidarity Movement, in terms of tactics and the similar widespread challenge to undemocratic domination by a client state satellite of a world power.

The Polish Solidarity Movement, although it erupted in the summer of 1980, had been fueled by citizen dissatisfaction since 1945, when Winston Churchill and Franklin Delano Roosevelt, in a betrayal of trust and principles of national self-determination, delivered Poland and other Eastern and Central European countries to the former Soviet Union for military occupation. Okinawa was delivered to the U.S. by the postwar Japanese government, for similar use. The Okinawan movement, like the democracy movements in Eastern and Central Europe, has been in the making since 1945.

The ongoing sit-in at the Okinawa Prefecture Building (fueled by collective moral, spiritual, social and political energy passed down through generations .


This shot of the meeting, held at the lobby of Okinawa prefecture building on Dec.28 , shows what our sit-in is like (still now, a considerable people are sitting in Okinawa Prefecture Building).

The media tends to report sensational scenes which emphasize the "conflict" between the Okinawan people and the Japanese government , and to highlight peoples' anger. But we are fighting against the Okinawa Defense Bureau's [Okinawa arm of the Japanese Defense Ministry] outrageous submission of the EIS. Our sit-in is in collaboration with Okinawa Prefecture Assembly members and Diet members from Okinawa.

Although we have been showing strong opposition and Okinawa prefecture is in winter holiday, the Okinawa Defense Bureau is still trying to sneak and deliver the rest of the EIS, which is needed to meet the requirement in EIA process. It forces people now to keep a continuous 24-hour sit-in at the prefecture building.

Posted by TenThousandThings at 11:00 PM
Email ThisBlogThis!Share to TwitterShare to FacebookShare to Pinterest
Labels: democracy, Okinawa