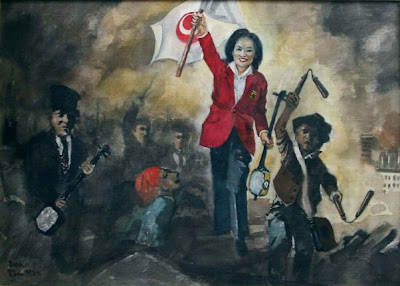 Keiko Itokazu, depicted in this painting that likens the Okinawan democratic movement to the American Revolution, is a member of the Japanese National Diet. She told an audience at Busboys and Poets, a Washington D.C. bookstore, that the Okinawan people have been heartbroken since having been unable to protect a 12-year-old girl from gang rape by U.S. troops in 1995. (Photo: Warisacrime.org )

Last week a delegation of Okinawan political, civic, and educational leaders visited Washington, D.C. "to promote awareness of enduring military base problems on Okinawa, Japan, and to propose the closure and consolidation of the 34 military installations on Okinawa as part of Congressional deficit-reduction plans to reduce defense spending by $1 trillion over the next ten years."


1. The closure and return of U.S. Marine Corps’ Futenma Air Station. Often referred to as the most dangerous base in the world, Futenma’s continued operations in densely populated residential areas of Ginowan City violate both US and Japanese safety standards. Planned deployment of the accident-prone MV-22 Osprey tilt-rotor aircraft to Futenma in 2012 faces strong opposition across Okinawa.

2. The cancellation of plans to construct a new Marine Corps air base at Cape Henoko, which involves massive land reclamation of a beautiful coral reef marine ecosystem and the habitat of the critically endangered Okinawa dugong (sea manatee).

3. The reduction of unbearable noise caused by air operations at Kadena Air Base, and the withdrawal of any proposal to integrate Futenma’s helicopter squadrons into Kadena’s operations. Kadena is already the subject of a lawsuit filed by 22,000 plaintiffs seeking to terminate nighttime flight operations at the base.

4. An end to the construction of six new helipads in the Yanbaru forest in northern Okinawa. This construction will result in the permanent destruction of forestland said to be comparable to a World Natural Heritage site, as well as the erosion of the quality of life for local residents of Takae.

5. The revision of the U.S.-Japan Status Of Forces Agreement, which will be demanded in particular by family members of Mr. Koki Yogi, who was killed by a civilian employee of the U.S. Air Force in January, 2011. The U.S.-Japan SOFA routinely obstructs fair trials and favors U.S. military and civilian personnel who commit crimes in Japan. Such crimes, which occur on a weekly basis, include fatal driving incidents, residential break-ins, taxi robberies, sexual violence, and other serious crimes against local citizens.

The delegation held a public forum at Washington's iconic bookstore, Busboys and Poets. David Swanson's analysis at War is a Crime includes background about the speakers and documents facts attesting to the noxious noise, environmental destruction, social degradation, and violent crime that the U.S. military has brought to Okinawa for six decades:


Toshio Ikemiyagi thanked people who came to hear them and pointed out that we all looked healthy and alert. That, he said, is because you have all had sleep. You've been able to sleep at night without deafening jet noise, he said. Ikemiyagi is the lead attorney on a lawsuit challenging the Kadena Air Base's noise pollution. He played us a video on Monday of what it is like. For the people who live there, he said, the war that ended 67 years ago has never ended.

Keiko Itokazu, a Member of the Japanese National Diet, depicted in this painting, said the Okinawan people had been heartbroken since having been unable to protect a 12-year-old girl from gang rape by U.S. troops in 1995. The Status of Forces Agreement between the United States and Japan gives U.S. troops immunity from Japanese prosecution. Between 1979 and 2008, U.S. forces in Okinawa caused 1,439 accidents (487 of them airplane related), and 5,584 criminal cases (559 of them involving violent crimes). The list includes fatal driving incidents, residential break-ins, taxi robberies, sexual violence, and other serious crimes against local citizens.

Swanson ends his article with a meta-message from Okinawa:


The people of Okinawa have had enough.

It's miraculous that Okinawans have been able to counter the unwelcome, violent military presence in Okinawa with a healthy, mature, consistent, ethical, and visionary collective response that reaffirms the Okinawan commitment to democratic process and humanity's highest moral values: reason, justice, veracity, peace, and life.

(More on U.S. responses to the delegation's visit from Kyle Kajihiro at DMZ Hawai'i, including a link to traditional conservative (and Network for Okinawa member) Doug Bandow's article at Forbes, "Give Okinawa back to the Okinawans.")
Posted by TenThousandThings at 7:28 PM
Email ThisBlogThis!Share to TwitterShare to FacebookShare to Pinterest
Labels: civilian victims of military violence, democracy, ecosystems, Human rights, oceans, Okinawa, rainforests, women

This is great. I was glad to see the mention of the link to Doug Bandow’s article. He brings a lot to the discussion and maybe even offers some insights that can help people bridge the usual left-right political divide in the US to unite people over this issue (and others like it).