Gavan McCormack: "Little basis for the view that North Korea poses a threat of regional aggression..." 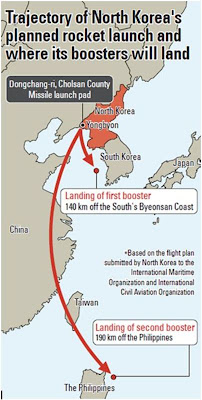 (Gavan McCormack: "Note that this trajectory, traversing both China and Taiwan, would make any intervention by the US or Japan extremely difficult. Image: ROK Drop.com)

East Asia scholar Gavan McCormack brings his attention to the latest revival of the media and political theatrical drama, "Pyongyang Peril", now in its 62nd season, in this rational and multi-layered analysis at The Asia-Pacific Journal: "North Korea's 100th – To Celebrate or To Surrender?":


Although there is no doubt that North Korea is a highly unpleasant dictatorship), there is little basis for the view that it poses a threat of regional aggression...

The real issue is the far too long continued state of "temporary" ceasefire on the peninsula. The task is to normalize relations between north and south and between North Korea and its former colonial master Japan and its bitter enemy of 62 years, the United States, and bring this country in from the "cold" of international isolation.