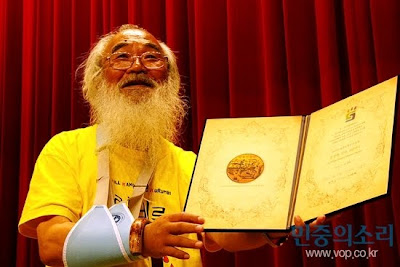 Father Mun Jung-hyun, a Catholic priest and leader in the Save Jeju Island movement, accepted the Gwanju Prize for Human Rights, an award given by the May 18 Memorial Foundation to recognize "individuals, groups or institutions in Korea & abroad that have contributed in promoting and advancing human rights, democracy & peace through their work."

The award commemorates the spirit of the May 1980 Gwangju Democratization Movement (also known as "518" for its 18 May start) during which pro-democracy citizens battled soldiers in protest of the reign of Chun Doo-hwan, ROK Army general, military dictator of South Korea from 1980 to 1988: "Gwangju received valuable help from others while undertaking the struggle to examine the truth behind the May 18 uprising, and while striving to develop true democracy. In response, we would like to give something back to those who supported our cause for peace and democracy." The prize includes $50,000.

Fr. Mun is the first Korean recipient since the establishment of the award in 2000. This may reflect the concern of many in South Korea about the deterioration of human rights, especially infringements of freedom of assembly and free speech, including press freedoms. In Jeju Island, Gangjeong villagers have been arrested for simply praying in public, for the return of the homes, farms, and community that the South Korean government seized from them, without following due process of law, to make way for a navy base. Instead of sustaining and developing the democratic society established through the Korean democracy movement of the 1980's, South Korea, under the repressive and corrupt Lee administration, is going backwards: resurrecting practices common during its period of military dictatorship.

Fr. Mun was critically injured on April 6 of this year in a fall during a struggle when a policeman tried to stop him from completing "Stations of Jeju," a variation of "Stations of the Cross," a walking devotional. Although his physicians said he would have to stay in the hospital for at least six months to heal multiple fractured spinal vertebrae, he was able to leavel after only two weeks. Immediately after his release, he visited Dr. Song Kang-Ho, a fellow clerical peace activist, in prison and the villagers and activists’ sit-in protest site in front of the Jeju Island government hall, and then returned to the village where everyone joyously welcomed him. 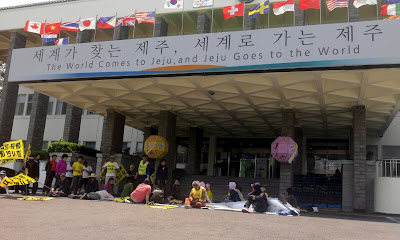 (Gangjeong villagers in sit-in protest at the Jeju Provincial Government office. Although banner reads "The world comes to Jeju and jeju goes to the world," the office is always closed to the Gangjeong villagers, despite Jeju being their ancestral homeland. Photo: Emily Wang) 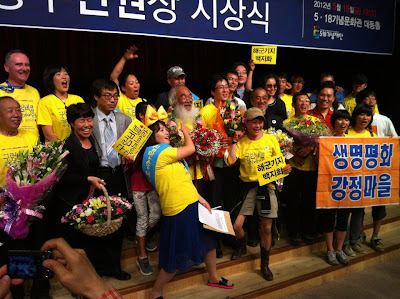 (For more background on Gwanju and the Korean democracy movement of the 1980's, investigative journalist (one of the best on Cold War Korea and Japan) Tim Shorrock's website includes in-depth reportage.)