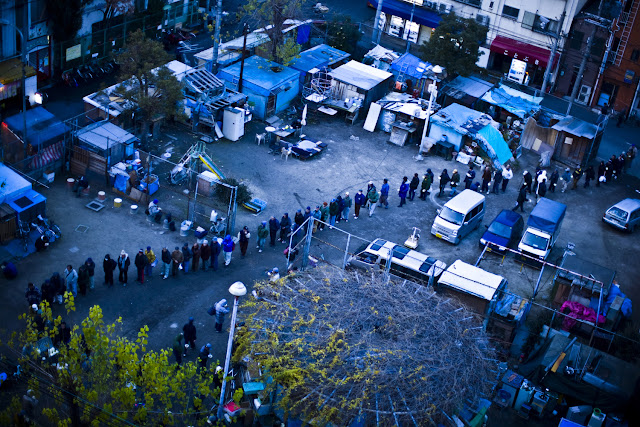 (Photo: Shiho Fukada,  The New Yorker: "People wait in line to receive a charity meal in Kamagasaki, Osaka. Once a thriving day-laborer’s town, Kamagasaki today is home to about twenty-five thousand mainly elderly day laborers, with an estimated thirteen hundred who are homeless.")

1 in 6 (more than 20 million) people in Japan live without food security, under the poverty line. In the last 10 years, over 700 Japanese people have starved to death.

At the same time, the consumption tax and government debt has increased.

(Tokyo already has the world’s sixth largest military budget.)
Posted by TenThousandThings at 9:10 AM
Email ThisBlogThis!Share to TwitterShare to FacebookShare to Pinterest
Labels: Japan, photography, poverty

I knew that there were a lot of people living in poverty in Japan, but I had no idea the numbers are so high. Thank you for this important post.
Do you have a source you could share for the other statistics (I mean, except for the Gini Index)? I remember being given a flyer once about the percentage of people living in poverty who were single parents but I haven't been able to find the statistic again.

The transformation of Japan from a middle-class society to a relatively poor country has happened so fast.

Found some of the information at Second Harvest Japan which links to a fact sheet in Japanese showing that the poverty rate of single parent households is 50.8%:

Thank you, there's a lot to read at that link.