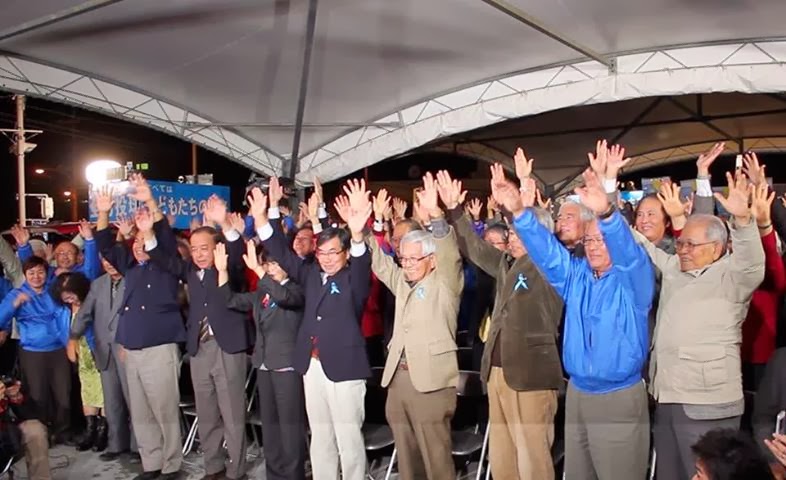 
It's victory for democracy, popular sovereignty, citizen's movement against the bribes and intimidation from Tokyo.

Agree with Penn's POV.  See the reelection not as win against Tokyo per se, but, instead, as a victory for Okinawan and local determination to use established democratic procedures to protect the traditional community and beautiful natural environment of Henoko, a fishing village situated in an exquisite coastal area.

Penn's photo of the moment of the announcement of Mayor Inamine's reelection (after sixteen years of struggle in Nago to save Henoko, and especially after the shock of Governor Nakaima's abrupt late December hairpin switch from his 2010 campaign promise to protect Henoko) brings to mind this quote by Dr. Martin Luther King, as Americans enjoy the peace and justice activist's birthday holiday weekend in the US:


"Now it isn't easy to stand up for truth and for justice...I haven't lost faith, because the arc of the moral universe is long, but it bends toward justice."

Mayor Inamine vowed to use his local authority to block the military landfill, proclaiming that his victory was an unofficial referendum on Henoko:


This election was easy to understand. It was about one issue, the Henoko issue... 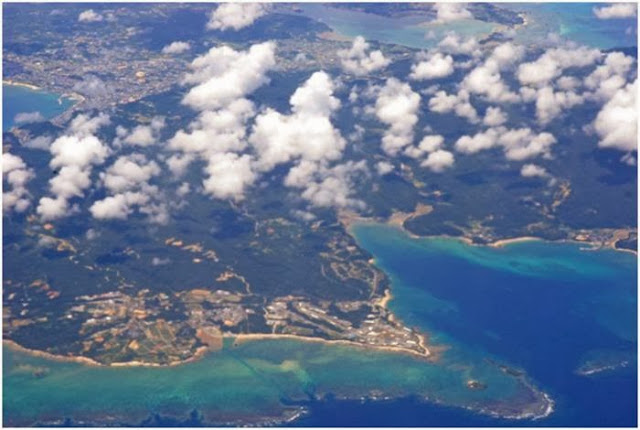 Most of the politicians in Washington and Tokyo who have made deals concerning Henoko (and journalists writing about Henoko) have never visited Okinawa and this biodiverse coastal area, and, therefore, have no understanding of the precious ecosystem and cultural heritage at stake. It's much more than a "less densely populated area in the north of the island."

Biologists once called Okinawa the “Galápagos of the East” for its rich biodiversity. Although the herds of thousands of dugongs that once grazed on seagrass on Okinawa's coasts are gone, around fifty of the critically endangered sea mammals (cousins to the manatee) still swim with similarly endangered sea turtles in the coastal waters of Henoko. Together with rare birds, fish, crustaceans, insects (classified as rank 1, warranting the highest level of protection by the Okinawa Prefectural Government), the Henoko coast is still a prime habitat of the unique biodiversity of Okinawa. A colony of critically endangered blue coral was discovered in 2007. A World Wildlife Fund study found 36 new species of crabs and shrimps in 2009.  And Tokyo marine science researchers found a “rain-forest”-like variety of 182 different species of sea grasses and marine plants, four of which were probably new species, in Oura Bay in 2010.


Environmental NGOs are concerned that the reclamation [landfill] and its concomitant introduction of invasive alien species like the Argentine ant would lead to the destruction of the vulnerable island ecosystem.

[The International Union for Conservation of Nature] IUCN has adopted three Recommendations/Resolution requesting the two governments [US and Japan] to review the construction plan.

The Okinawa dugong, a natural monument, is beloved in the mainland as well as Okinawa. Dozens of mainland Japanese environmental NGOs representing hundreds of thousands of Japanese people have supported their Okinawan counterparts and the elder residents of Henoko who have kept watch at a 24/7 sit-in Henoko since this struggle began in 1996.

On January 9, a plaintiffs group (and legal team of 126 people) announced they initiated a lawsuit seeking the cancellation of Nakaima's approval of the Henoko landfill:


Article 4 of the Public Water Body Reclamation Act requires that the landfill work properly and reasonably use national land. The act also requires the work to be environmentally friendly. The landfill approval by the governor does not meet the requirements of the act.

Kunitoshi Sakurai, a member of the Okinawan Environmental Network, and a professor and former president of Okinawa University, detailed the environmental protection problems in "Japan’s Illegal Environmental Impact Assessment of the Henoko Base," noting that Japanese backroom environmental assessment procedures and laws do not come close to the standards of other developed countries. The founding chairman of the Japan Society for Impact Assessment, Nagoya University professor emeritus Shimazu Yasuo described the Henoko EIA as the "worst in Japanese history."


Even a former Minister of Defense, Satoshi Morimoto, criticized what he described as the "sloppiness" of the Environmental Impact study and the concealment of “'inconvenient facts' of the appearance of the dugong...He asserted, "the Yambaru forest and rivers, whose biodiversity is recognized under both national and prefectural plans, cannot be protected under the planned relocation."

Additionally Earthjustice, a US environmental law firm,  the Japan Environmental Lawyers Federation (JELF) and  Okinawan environmental NGOS will file a new Dugong lawsuit in the US, at the same federal court in San Francisco (in which they filed the first Dugong Lawsuit in 2003):

The lawsuit aims to make the U.S. government stop the Japanese government from entering the area for the reclamation work. The National Historic Preservation Act (NHPA) of the United States requires its government to protect cultural heritage around the world. If the government’s actions could affect cultural assets in other countries it must take that impact into account...

The plaintiffs, including the Okinawa dugong and three Japanese citizens, as well as six Japanese and American environmental associations have brought another action against Secretary of Defense and the United States Department of Defense for violations of the National Historic Preservation Act. They allege that the defendants approved plans for construction of the Futenma replacement facility without taking into account the effect of the construction of the military facility on the Okinawa dugong, which is a marine mammal of cultural and historical significance to the Japanese people...

The plaintiffs are same environmental groups and individuals who filed the Okinawa dugong lawsuit in 2003, which they effectively won. In the interlocutory decision, the judge decided that the dugong is subject to the National Historic Preservation Act, and that the government not evaluating the impact on the dugong was a violation of the law.

Kagohashi said, “We considered protective measures for the dugong in the previous case, but this new lawsuit aims to block the construction involved in the landfill. The American Environmental Law is very strict when it comes to the destruction of the natural environment. Our chances of victory are better in the United States than in Japan.”

The first Okinawa Dugong Lawsuit was filed in 2003. The same federal district court determined in the interlocutory decision of Jan. 2008 that the National Historic Preservation Act (NHPA) applied to the Okinawa dugong as a protected species.

The new lawsuit will not only take protective measures for the dugong as the original lawsuit did; it will additionally more fully address the issue of military landfill construction. U.S. environmental laws are more comprehensive and impartially administered than Japanese environmental laws. According to legal experts, the issue of whether or not a ban on the construction is in the interests of the general public will be a central issue. 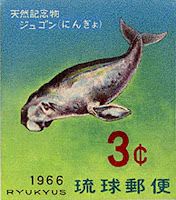 In 1966, Ryukyus postal stamp commemorates the dugong's designation as a natural monument.
(Image: Save the Dugong Campaign Center)