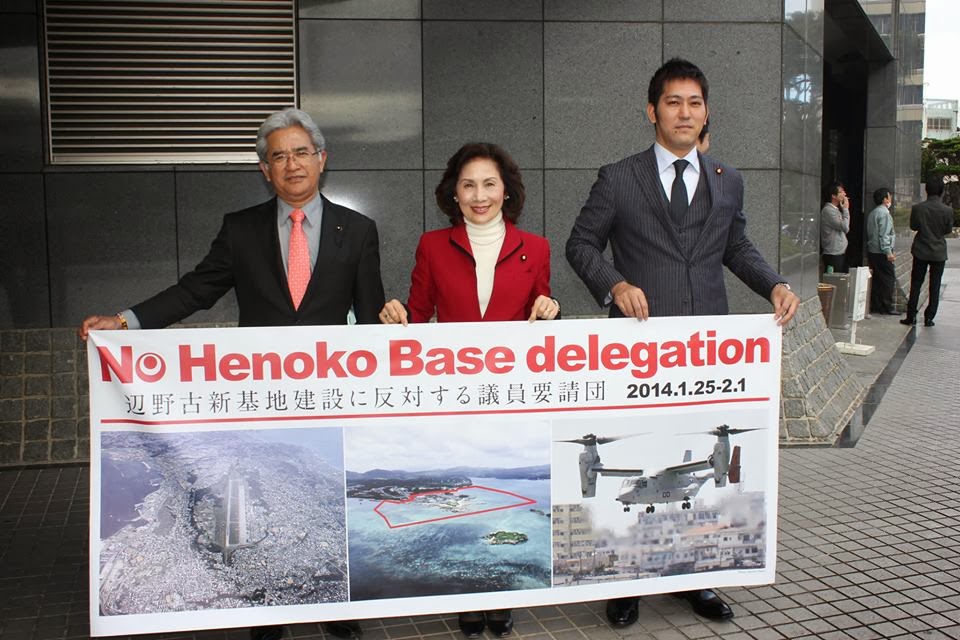 
This week, three Okinawan political leaders who comprised the 2014 "No Henoko Base delegation," visited Washington, D.C. to meet with US Congressional members, think tanks, and scholars to convey the results of Mayor Susumu Inamine's January 19, 2014 reelection in Nago and  Okinawan concerns. They told Americans that Mayor Inamine was reelected because of his promise to protect Henoko, an environmentally sensitive coastal area in central Okinawa, under threat by an ecologically destruction military base plan.

The base plan, pushed by a few military construction companies in Okinawa with close ties to the LDP, never had the support of the Okinawan people, who have viewed it as an ecologically destructive boondoggle.  The current Okinawa governor, Hirokazu Nakaima won reelection in 2010 because of his campaign promise to oppose the plan.  However in late December, Governor Nakaima capitulated to the current Japanese (LDP-run) administration and signed an approval for military landfill. All the while, he made it clear that he did so only under political duress, reiterating his belief that it was not politically viable.

Governor Nakaima's surprise hairpin switch galvanized the formation of an informal network of scholars, writers,  and peace activists who quickly came together to issue a statement (now a petition) asking the Japanese and US governments to honor the popular will of the Okinawan people: abandon the Henoko plan and close Futenma, a flight training base dangerously located in the middle of Ginowan City in central Okinawa.


Not unlike the 20th century U.S. Civil Rights struggle, Okinawans have non-violently pressed for the end to their military colonization. They tried to stop live-fire military drills that threatened their lives by entering the exercise zone in protest; they formed human chains around military bases to express their opposition; and about a hundred thousand people, one tenth of the population have turned out periodically for massive demonstrations.

Octogenarians initiated the campaign to prevent the construction of the Henoko base with a sit-in that has been continuing for years. The prefectural assembly passed resolutions to oppose the Henoko base plan. In January 2013, leaders of all the 41 municipalities of Okinawa signed the petition to the government to remove the newly deployed MV-22 Osprey from Futenma base and to give up the plan to build a replacement base in Okinawa.

We support the people of Okinawa in their non-violent struggle for peace, dignity, human rights and protection of the environment.

On Thursday, Okinawan scholars and journalists issued their own statement, with the same request: "Respect the voice of the people of Okinawa." The Ryukyu Shimpo reports:


This statement was made in response to Susumu Inamine’s re-election as mayor of Nago. The signers stressed that the election result was an expression of dissent towards the new base not only by the citizens of Nago, but also by the Okinawan people...

Seigen Miyazato, a political scientist and adviser of the Okinawa International Issues Study Group, and other signers issued the statement at a news conference held on January 27. The signers included scholars who specialize in constitutional law and political science, and journalists...

One year ago the mayors of all 41 municipalities visited Prime Minister Abe to submit the petition to cancel the relocation plan within the prefecture. Kunitoshi Sakurai, a professor at Okinawa University, stressed, “We must rebuild an ‘All-Okinawa’ system. We have the common ground that we will decide the future of the region for ourselves.” Masaaki Gabe, a professor at the University of the Ryukyus, Tateki Yafuso, a former professor of the University of the Ryukyus and Masako Yafuso, a board member of the Okinawa Human Rights Association, attended the news conference. 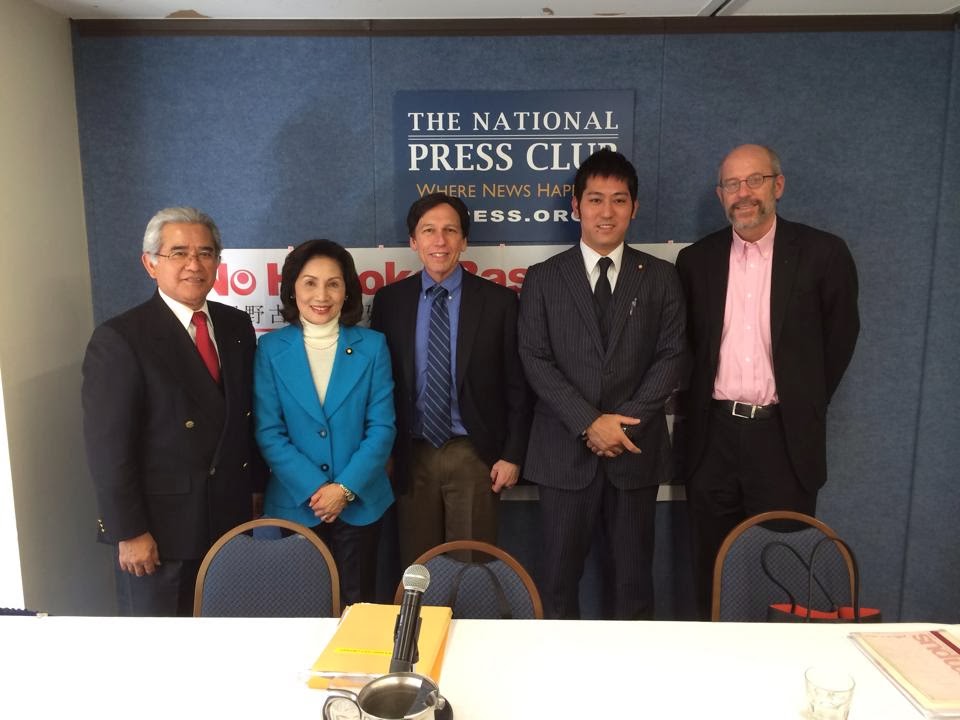 In "The Front Line in the Struggle for Democracy in Japan – Nago City, Okinawa," published on Jan. 27 at The Asia-Pacific Journal: Japan Focus, Gavan McCormack outlines and explains the significance of this latest episode of the sixteen-year struggle of Okinawans to close Futenma  and to halt the proposed construction of the air training base's ostensible "replacement" at Henoko.

The East Asia scholar (co-author of Resistant Islands: Okinawa Confronts Japan and the United States) frames the conflict as construction pork barrel politics and militarism versus vibrant citizen democracy and nonviolence in Okinawa.  McCormack (an original signatory) notes that the international letter on behalf of the movement uplifted Mayor Inamine, Okinawan political leaders and activists during the Nago campaign:

Many, including Mayor Inamine, spoke of taking heart from the sense that the Okinawan cause, Nago’s cause, was just and internationally supported. Solidarity is something that Okinawans have long looked for and deserved - by the justice of their struggle, their persistence over so many years, and the resolutely non-violent, citizen-centred democratic frame of their movement.