Struggle for the Soul of Okinawa: Mayor Susumu Inamine's reelection campaign kicks off in Nago 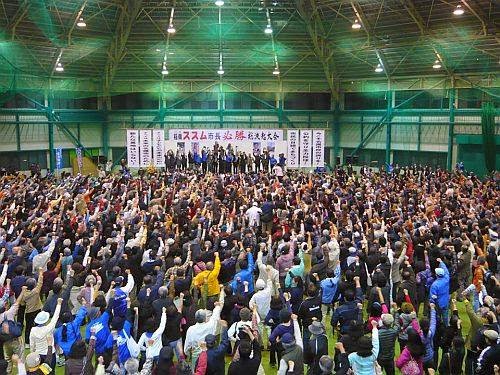 (Photo: Save the Dugong Campaign Center)

Via Dr. Masami Mel Kawamura via Save The Dugong Campaign Center:


On Jan 19, the Nago (where Henoko is located) mayoral election will be held.

Last night, Nago Mayor Susumu Inamine's election campaign kicked off. Inamine has steadfastly worked for to save Henoko and Oura Bay, a biodiverse coral reef and the last habitat of the critically endangered Okinawa dugong, from military demolition to make way for a training base.

More than 3500 people gathered to support Mr. Inamine in gathering in Nago.

Japan scholar Gavan McCormack  sums up the importance of this election in the aftermath of Okinawa Governor Nakaima's betrayal of his 2010 campaign promise to protect Henoko:


Ahead lay potential legal challenge (including a possible resolution of lack of confidence in the Governor or a recall motion), court challenges to the legality of the procedures adopted by Tokyo, and undoubted political and social obstacles. Following the “victories” of its November and December stratagems [forcing LDP political officials in Okinawa to renounce their campaign promises to protect Henoko], the national government had to concentrate on prefecture-wide pacification, paying particular attention to winning back the support of New Komeito [a political party ally of the LDP which says it will remain neutral regarding Okinawa]. And most immediately it faced the problem of Nago City.

In the looming election, on 19 January 2014, for Nago City mayor, incumbent Inamine Susumu, elected in 2010 on an explicitly anti-base platform and maintaining a firm position of “no base to be constructed on sea or land in Nago City,” confronts Suematsu Bunshin, a close associate of Governor Nakaima who now represents the explicitly pro-Henoko base construction position. Where Inamine had actually refused any base-related national government subsidies, Suematsu insisted the City could not develop without them. Abe and his government very much needed a Suematsu victory.

With the exception of the brief window of DPJ government under Hatoyama Yukio in 2009-2010, government after Tokyo government since 1997 has clung to the idea that Futenma should be replaced not returned, that the replacement had to be in Okinawa not elsewhere in Japan, and that within Okinawa it could only be in Henoko. For Abe and his associates, Inamine and Nago City constitute a kind of last redoubt, which absolutely must be defeated. The fact that Nago City had rejected Tokyo’s subsidy as inducing a dependent mentality that actually impeded development and that it seemed to be having some success in charting an alternative, self-generated or autochthonous path, made it the more urgent in Tokyo eyes that control over it be re-established.

No town or city in modern Japan has ever faced anything like the pressure that Nago City has faced, or accomplished such effective resistance for so long. Nago citizens have borne the pressure of the base project ever since it was first announced in 1996, rejecting it by plebiscite in 1997 only to have the then mayor overturn the result and recommend the project go ahead. Since then, they have thwarted it determinedly through the term of 11 Prime Ministers, 3 Governors, and 4 Nago City mayors...

Additionally, Shingetsu News on FB reported today that an Okinawan citizens's group has concurrently filed the first new lawsuit on behalf of the Okinawa dugong.

Jan. 27. 2014 Update: More reportage and analysis by Okinawa (and East Asia) scholar Gavan McCormack (co-author of Resistant Islands: Okinawa Confronts Japan and the United States) at The Asia-Pacific Journal: Japan Focus: "The Front Line in the Struggle for Democracy in Japan – Nago City, Okinawa."
Posted by TenThousandThings at 9:40 AM
Email ThisBlogThis!Share to TwitterShare to FacebookShare to Pinterest
Labels: democracy, Human rights, Okinawa