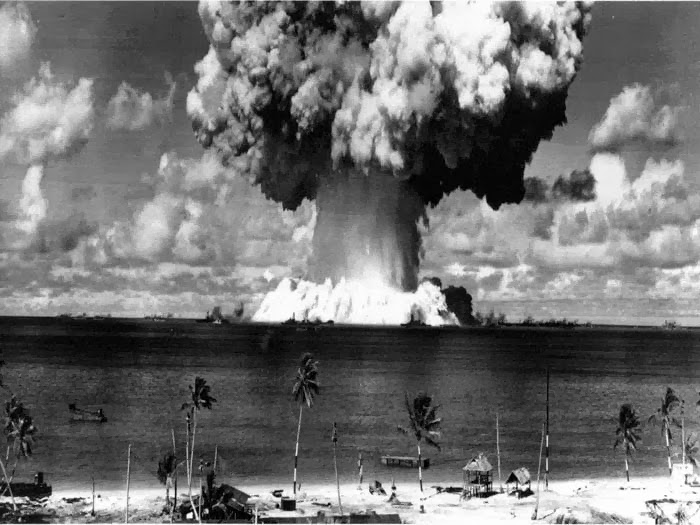 March 1 is the 60th anniversary of the 1954 experimental explosion of a thermonuclear bomb on Bikini Atoll, an island that was part of a United Nations Trust Territory  administered by Washington. Codenamed Castle Bravo, the 15-megaton bomb was America's largest nuclear device and one of 67 nuclear bombings of Bikini and neighboring Eniwitok atoll.

Bikini's fate as a nuclear testing ground was set on February 10, 1946, when Commodore Ben H. Wyatt spoke with King Judah, the leader of the Bikinians. Wyatt, the military governor of the Marshall Islands, told King Judah that Bikinians had an opportunity to bring about world peace.  Wyatt likened Bikinians to the children of Israel whom the Lord saved from their enemy and led unto the Promised Land. They only needed to agree to leaving their home “temporarily” so that the United States could explode a thermonuclear bomb on their island “for the good of mankind and to end all world wars."

King Judah, speaking for his people, devout Christians after decades of missionary activity on the island, replied, "If the United States government and the scientists of the world want to use our island and atoll for furthering development, which with God’s blessing will result in kindness and benefit to all mankind, my people will be pleased to go elsewhere.”

Thereupon, Navy Seabees helped disassemble the Bikinian church and community house and relocated the Bikinians 125 miles (201 km) eastward to Rongerik Atoll. This uninhabited island was one-sixth the size of Bikini Atoll and lacked water and food supply. The Navy left them with a few weeks of food and water, then abandoned them from July 1946 through July of 1947. A team of U.S. investigators concluded in late 1947 that the islanders must be moved immediately. Journalist Harold Ickes wrote, "The natives are actually and literally starving to death."

Castle Bravo hit Bikini with the force of 1,000 Hiroshima-sized bombs. Fallout (that resembled snow except it didn't melt) flowed down upon the residents of Rongelap and Utrik Atolls.  After the Cold War, declassified documents showed that, before the bombing,  the U.S. had organized  Project 4.1,"The Study of Response of Human Beings Exposed to Significant Beta and Gamma Radiation Due to Fallout from High Yield Weapons,” a medical study of the residents of the Marshall Islands exposed to radioactive fallout from Castle Bravo. 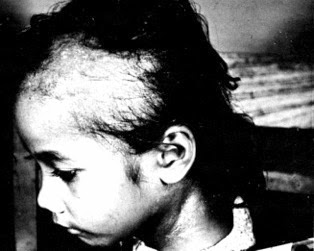 Bravo's radioactive snow went far beyond the northern atolls of the Marshall Islands. 82 miles away, fallout drenched the 23-member crew of Lucky Dragon, a Japanese fishing boat, and, in the same vicinity, unacknowledged victims on 1,000 other boats and ships out at sea during Bravo and other explosions.  The Asahi has brought to light some of the victims' experiences in "‘Forgotten’ victims of U.S. H-bomb testing dying in despair, hopelessness." The Mainichi noted that U.S. government paid "condolence money" to the Japanese government, but did not compensate the actual victims exposed to the bombs' radioactive"death ash."

The contamination of the Lucky Dragon and other vessels in the Pacific (in an area that ranged from the Marshall Islands to Japan to Taiwan and beyond) gave rise to a vigorous postwar anti-nuclear movement in Japan.

Nuclear Savage: Islands of Secret Project 4.1 (documentary film by Adam Jonas Horowitz that exposes the decades of human radiation testing after Castle Bravo. The people of Rongelap describe an unbelievable level of suffering from recurring cancers, miscarriages, and birth defects that have affected multiple generations) 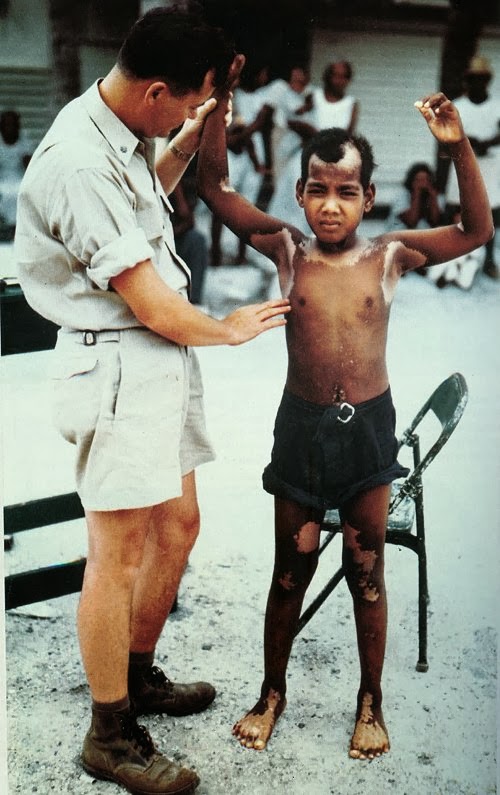 "BRAVO and Today: US Nuclear Tests in the Marshall Islands" (Tony de Brum, The Asia-Pacific Journal, May 19, 2005)

More background, via  Our Islands Are Sacred on Facebook: