Women Cross DMZ: "Every step for peace is important!." 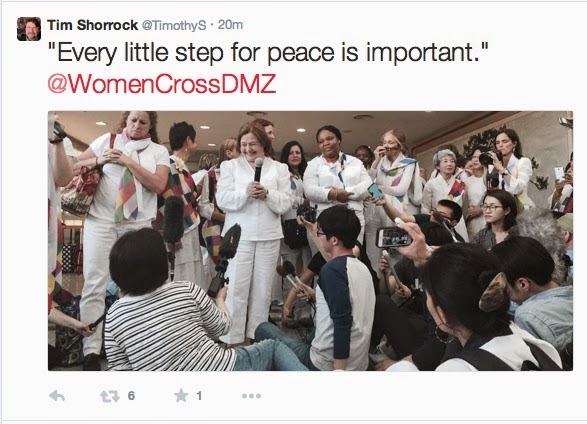 Via journalist Tim Shorrock: "Every step for peace is important!" "We're here because we don't believe in war!

The women who just crossed the DMZ include Suzuyo Takazato, co-founder of Okinawa Women Against Military Violence, Ann Wright), Nobel Laureate Mairead Maguire, an Article 9 and Okinawa supporter, Christine Ahn, a Korea scholar. This action reflects decades of cross-border interconnections between women's networks working for peace and democracy for all of East Asia and the world.


In an historic move, a group of global feminist activists march into the demilitarized zone between North and South Korea to create a space for a new type of conversation about truly ending the Korean war.

At the time of this blog post in Seoul and Pyongyang it’s already Sunday, May 24th, International Women’s Day for Peace and Disarmament, when a group of more than 30 women are scheduled to cross the Demilitarized Zone (DMZ) at Kaesong from North Korea into South Korea. Their goal: to draw attention to Korea’s “forgotten” and unfinished war, and move toward a real peace that can reunite families and, perhaps, a divided nation...

The Korean War (officially 1950-53) stands out for its bloody toll. Some 4 million people, mostly civilians, perished. Although a “temporary” cease-fire was signed, the last 62 years have been marked by a protracted cold war defined by ongoing threats by both sides of the DMZ, decades of profligate military spending, and what is effectively a permanent state of near-war and the fear of attack. The idea to walk from North Korea into South Korea began with a dream that lead organizer Christine Ahn had several years ago. The concept grew after Ahn connected with feminist icon Gloria Steinem who took a public stand in 2011 against the militarization of South Korea’s Jeju island.

The movement evolved into WomenCrossDMZ as Nobel Peace Prize laureates Mairead Maguire of Northern Ireland and Leymah Gbowee of Liberia joined Ahn, Steinem and what has grown to more than 30 women from South Korea, Japan, the US, Britain, Australia--at least 15 countries, in all.

Gwyn Kirk, a founding member of Women for Genuine Security, and one of the DMZ marchers, says WomenCrossDMZ is intended to create a space for a new type of conversation about ending the Korean war once and for all. After more than 60 years of tit-for-tat provocations, costly and dangerous brinksmanship and outright nuclear threats, Kirk says it’s time to create a different future.

That this movement is organized entirely by women is natural, says Kirk, pointing to UN Security Resolution 1325 which reaffirms “the important role of women in the prevention and resolution of conflicts, peace negotiations, peace-building, peacekeeping, humanitarian response and in post-conflict reconstruction…”

The visionaries are being criticized by mostly male (patriarchal?) journalists who appear threatened by their move to shift public narratives dominating political commentary in East Asia from that of fear and aggression to those of hope and reconciliation:


Independent investigative journalist Tim Shorrock had a different take. In an email from Seoul, he called the DMZ march “an important milestone because it runs against the grain of the militarist approach to Korea taken by the Obama administration and the hostility of the South Korean government.”

Shorrock, who has covered Korea and Japan for more than three decades, said the women’s march and symposia held in Pyongyang and later Seoul, sends a message to the North that peace and reconciliation are possible. He hopes the march will also spur the U.S. to “take measures to defuse the tense situation in Korea and adopt a more flexible approach to settling its differences with North Korea.”

Christine Ahn cuts to the chase of the tragic, absurd 60-year stalemate:


WomenCrossDMZ, Ahn says, seeks to “get to the root cause of the issue of divided families” and what she calls “crazy militarization” and “crazy repression” of democracy in both North and South Korea...

Ahn describes WomenCrossDMZ as “peace women” who want to find a peaceful resolution to the Korean stalemate. To do that, she says, requires listening, understanding, dialogue and a degree of empathy which is absent today. Dehumanizing the other side won’t bring peace, Ahn says. “It’s a tough place to be, but I really believe there is no other alternative.”