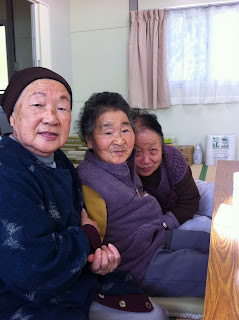 For Tokue Ohyama, an octogenarian resident of Ishinomaki City in Miyagi prefecture, some days since last March have been harder than others.

“Shortly after the tsunami hit, when I felt lonely I sometimes wished that it just would have swept me away,” Ohyama confided when I met her last weekend in the temporary housing unit where she is now living. I was there helping to serve coffee and sweets through a volunteer initiative run by a local organization to make sure that survivors—particularly the elderly with no other family—are not left in isolation. “Now that I have made friends here, though, I’m feeling much more positive,” she added.

And positive she was indeed. She had been the first to come into the community room where our makeshift café had been set up, beaming as she proudly offered a plate of delicious pickled daikon radish that she had prepared for the gathering. I strained to understand her speech due to her strong local dialect (as did the non-local Japanese volunteers, to my relief), but despite the language barrier, she was clearly playful and even satirical. “That tsunami chased me so fast that I swear it was in love with me!” she said, cackling with obviously ironic laughter.

At Ohyama’s side was Shoko Matsunaga, who has found herself acting as a leader of sorts among the housing unit’s mostly female residents. “After the tsunami, while spending those several long days stranded in the freezing cold with no electricity, food or drinking water, I honestly thought I would not make it,” she said softly. “The fact that I am actually sitting here right now in fact feels like a dream. I am so incredibly thankful for having survived, and I want to spend the rest of my life doing whatever I can to try and help others.” 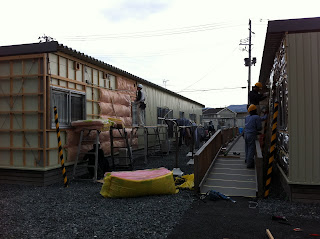 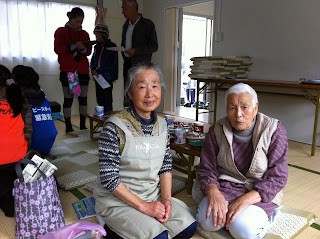 Bottom: Shoko Matsunaga (left) and Tokue Ohyama (right), with volunteers in the background

A total of some 20,000 people in Ishinomaki are now living in the temporary housing units. While being thankful for the shelter, residents must put up with a lack of privacy due to paper-thin walls that let in every noise made by neighbors at all hours. And in several instances, residents bedridden from depression or illness have actually died without anyone discovering so for days.

“One additional significant problem we are facing now in these housing units is that of suicide,” explained Toshihiko Fujita, who founded a small organization in Ishinomaki based at the Koganehama Community Center, where my partner and I volunteered over the weekend. “It’s crucial to build community through activities such as common meals and café events, so that no one will succumb to loneliness and isolation.” The community center is used as a gathering space for local citizens and volunteers alike, and often hosts events for locals put on by NGO volunteers, such as art therapy workshops, massage sessions, community meetings, and more.

Fujita, who saw his mother swept away by the tsunami, has been working tirelessly since the day after the disaster struck—beginning with the traumatic work of clearing away bodies. Again trying to lighten the heaviness of the subject at hand, he commented dryly, “Here, we just call ourselves the mudbusters.”

With the extent of the damage to cities that faced the tsunami’s destruction, including Ishinomaki, mud will indeed be a steady reality for the months and even years to come. On Sunday, after having spent a comfortable night outside the local community center inside a parked mobile home that Fujita has made available for visiting volunteers, a group of us joined up with members of another volunteer organization known appropriately as "It’s Not Just Mud". 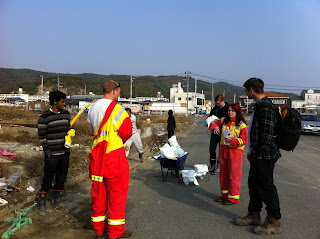 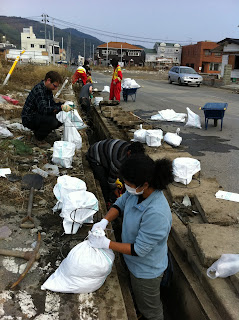 While several of the volunteers had been involved with the relief operations since the days immediately following the disaster, it was quite disconcerting for me as a first-time volunteer to encounter personal items—coins, dishes and ceramics, a remote control, a section of a car stereo, chopsticks, baby-sized silverware— while standing inside a ditch shoveling mud. 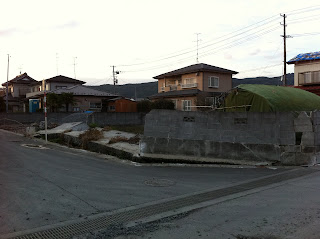 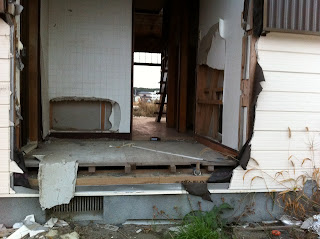 Top and bottom: The "It's Not Just Mud" crew at work

Despite having seen images of the tsunami’s destructive path through photographs and videos, it was a similarly jarring experience to walk near the coastline and see row after row of completely gutted homes and shops, some with toppled futons and furniture still as they were just after the wave hit.

An indescribable sensation also made me pause as I walked past Watanoha Junior High School, separated from the ocean by a mere thin stretch of forest, with its busted windows and its clock stopped eerily at 3:46 PM—exactly one hour after the earthquake had struck, and likely 30 to 45 minutes after the tsunami had reached land. I imagined the students having a normal day at school before the tragedy struck, laughing and joking in the now empty stairwells. Had they managed to escape in time, I wondered? Where were they now? 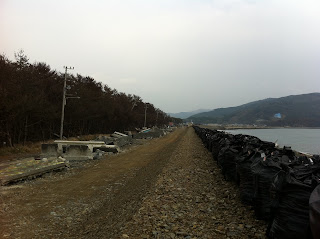 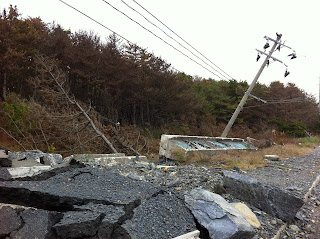 Obviously, in two days I was only able to scrape the surface of the issues that survivors continue facing in Ishinomaki and other disaster-hit areas (although I definitely plan to return soon). According to community leaders leading recovery efforts at the grassroots level, such as Fujita, a full recovery is years ahead, with local families continuing to face the agonizing decision of rebuilding or leaving to start anew.

Fujita also pointed out that such issues are further compounded by other problems such as local and national government apathy, a general lack of community cohesiveness, and local in-fighting over issues such as resource distribution in the wake of the disaster. “I’m so busy that I have not even had time to do my own grieving,” he admitted. “Maybe in a year or two, when things have settled down, I’ll have that luxury.

"Reparing buildings is one challenge, but repairing hearts is another one altogether," he added. "The trauma that people here have experienced is profound."

Fujita describing the problems facing Ishinomaki citizens, berating the Japanese mainstream media for its lack of coverage of issues facing survivors in affected areas, and urging volunteers from around the world to come join the relief effort 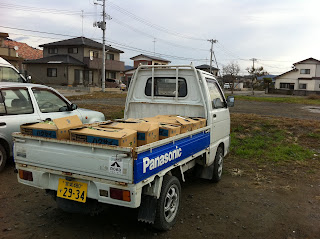 Top: 800 heads of Chinese cabbage donated by a farmer from Nagano prefecture, which Fujita drove around delivering to members of the local community together with a personalized message from the farmer 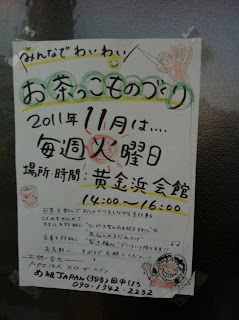 Bottom: Flyer announcing a tea-drinking and craft-making workshop at the Koganehama Community Center

Despite the enormity of existing obstacles, which seem to make the efforts of individual volunteers only miniscule, each shovelful of mud—as well as each and every human interaction—truly does make a difference, as I learned when being thanked countless times by residents who were so clearly grateful for the work of volunteers.

While chatting with another woman after our mobile café had moved to a second temporary housing area on Saturday afternoon, the conversation flowed easily from the NHK trophy ice skating competition, which was on television in the background, to more serious matters. She told me that she had lost almost every one of her friends in the tsunami—and that she dreamt of them every night. She then began describing earlier memories, when she had been a young woman in her late teens during the second world war.

“The military police used to walk around with bamboo spear weapons in case they came across any U.S. military enemies, and we were not even allowed to be caught using any words that came from the English language, such as kyabetsu (“cabbage”) or bo-ru (“ball”), she reflected. “I lost my chance to fall in love because of that war. What a meaningless waste it all was.”

Shoko Matsunaga, while she didn’t specifically mention the wartime past, did say at one point, “I certainly never thought I would be here sitting at a table with an American. And now, here I am, meeting volunteers from all over the world.

“Truly, I have so much to be thankful for.” 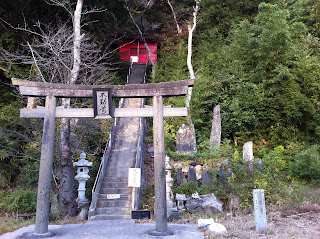 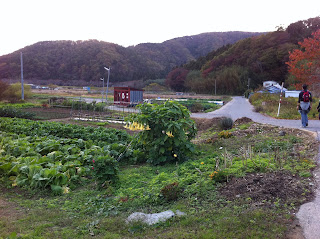 A powerful and moving testimony here Kim - one cannot began to imagine what the survivors must be continuing to go through on a daily basis.

Long may each shovelful of mud continue to make a difference and thanks for sharing your experience.

Thanks to *you*, Dom. Very much appreciated!!

Thank you for sharing, Kimmie. I'm glad you could be there to help. xoxo,
Elaina

You're making a difference in this world, Kim. I admire the relief work you're doing there, and the beautiful way you have written about it.

For those looking for more information on Fujita-san's group you can find my English Facebook page for the group here:

Thank you for all of your continued support and I hope to see you all soon at Koganehama Kaikan.