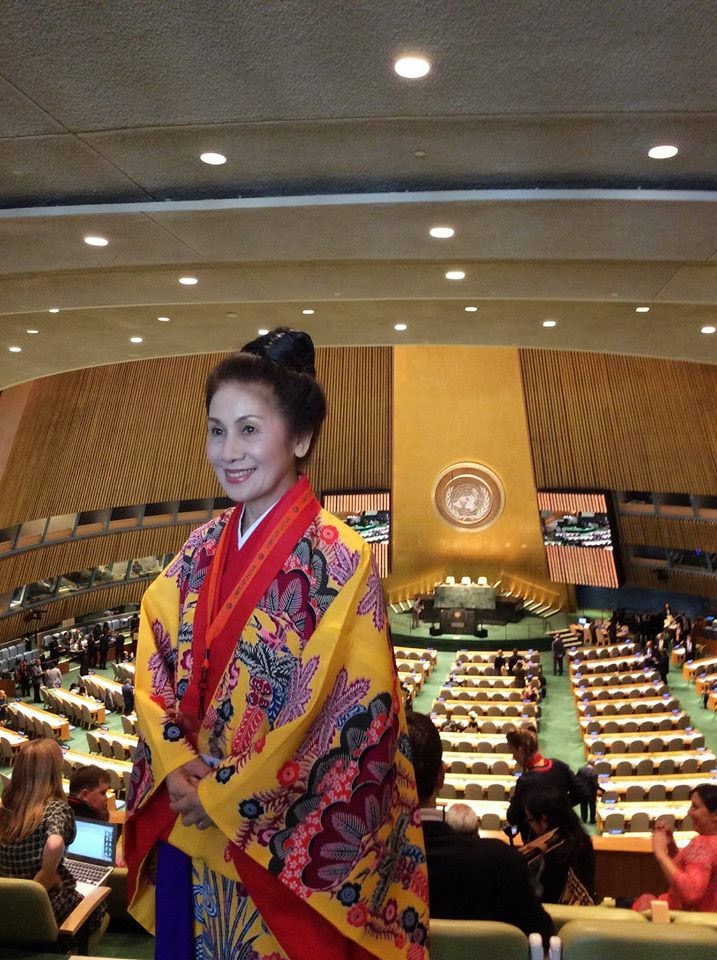 Upper House Member of the Japanese Diet, Ms. Keiko Itokazu, is representing Okinawa at the Indigenous World Conference starting today at the United Nations headquarters in New York. Indigenous peoples around the world have gathered. Mr. Shisei Toma, of the Association of Indigenous Peoples in the Ryukyus, is also in attendance.

Groups and individuals for peace, including Okinawan Americans and Japanese Americans who live in the NYC area, are supporting the Okinawan delegation's appeal to the U.N. community regarding human rights violations under ongoing forced US military expansion in Henoko and Takae.

The traditional local cultures and histories of Okinawa are deeply intertwined with the islands' distinctive ecosystems. Indigenous sacred places called utaki are situated in forest groves. Many have been destroyed or are now within US military bases built on land forcibly acquired in the aftermath of the Pacific War and during the 1950's "Bayonets and Bulldozers" period of military seizures of private property for base expansion. The Sea of Henoko is also considered sacred because it is the habitat of the Okinawa dugong, a sacred cultural icon, and because of the magnificence and abundant biodiversity of sea's coral reef.

Coral reefs have been an traditional part of Okinawan (and other Pacific Island) cultures for many centuries. However, most of the coral reefs on Okinawa Island are now dead, because of landfill, pollution, and coastal construction. Marine biologists say the coral reef at Henoko and Oura Bay is the best and most biodiverse coral reef in all of Okinawa prefecture. Okinawans are seeking to establish a marine protected area in Henoko to preserve the dugong and coral reef habitat and interconnected rivers, mangrove forests in this beautiful eco-region.

On Tuesday, September 22, Ms. Itokazu spoke on the "fulfillment of the rights of indigenous peoples at the national level and regional level" at the conference. She described forced new military base construction, adding that, in spite of the strong opposition of Uchinanchu (the indigenous people of Okinawa), the state is continuing to force the military base construction. Ms. Itokazu's conclusion: Uchinanchu are being deprived of the right of self-determination, contrary to the United Nations Declaration on the Rights of Indigenous Peoples. 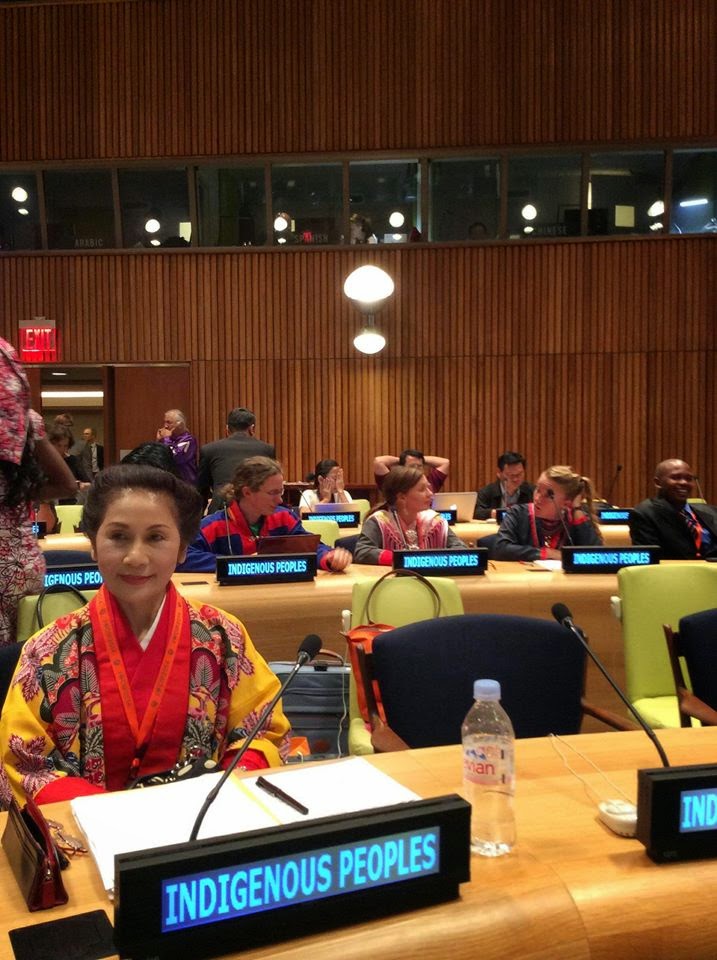 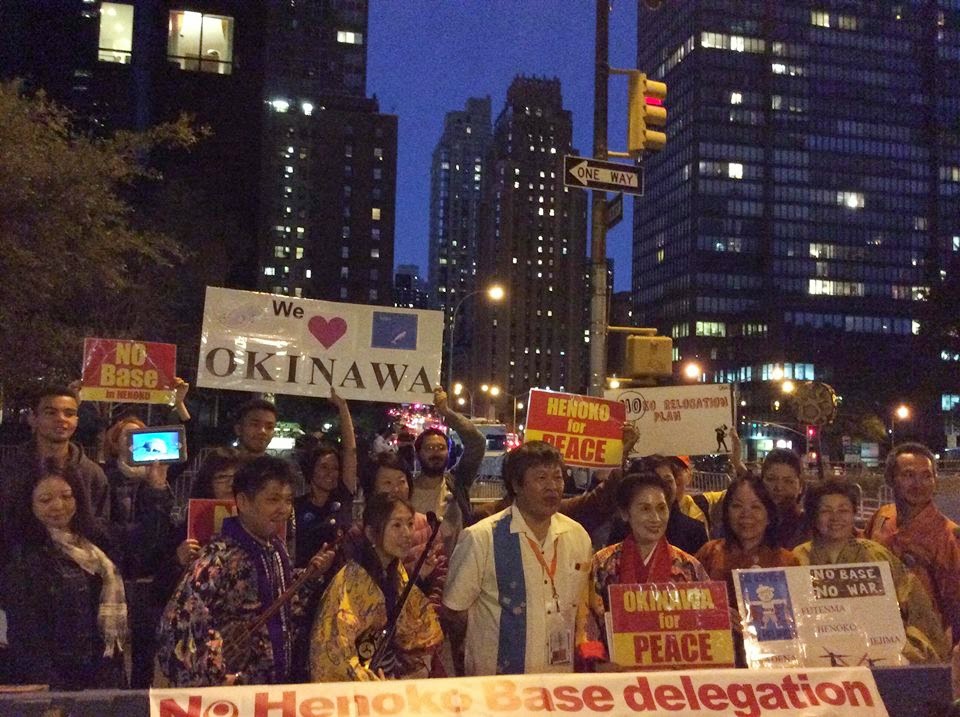 Posted by TenThousandThings at 12:00 AM No comments:
Email ThisBlogThis!Share to TwitterShare to FacebookShare to Pinterest
Labels: Article 9, citizen action, Japan, music, peace 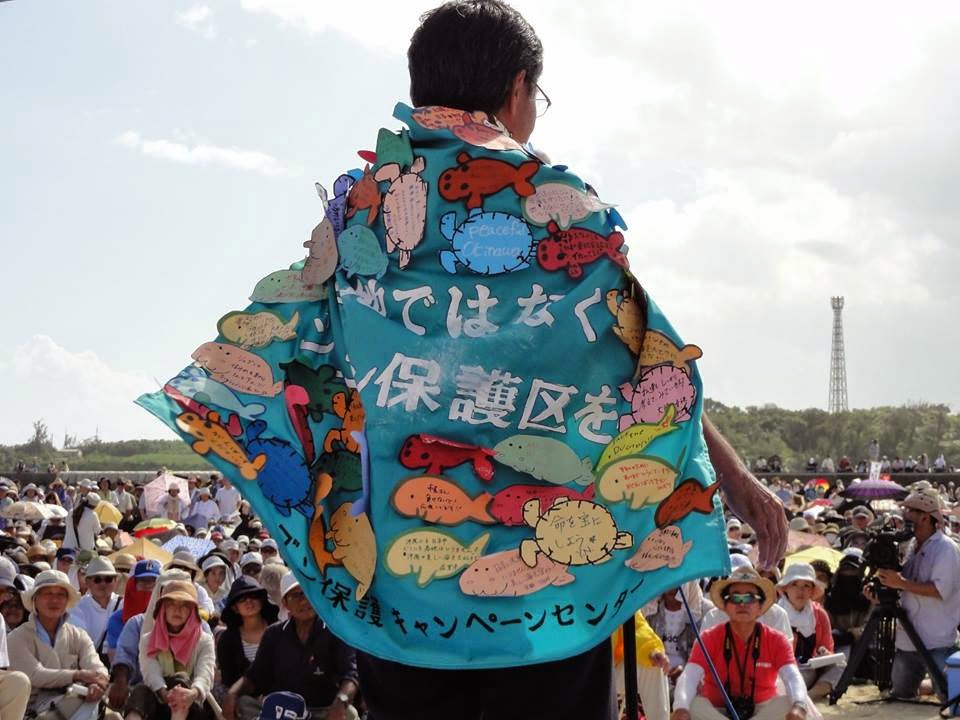 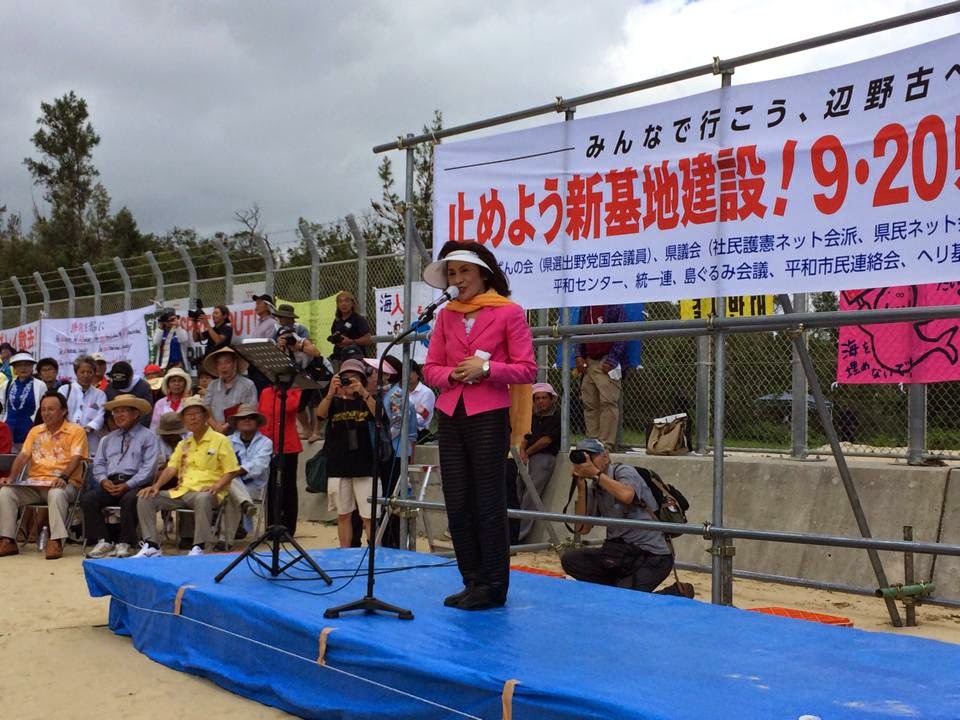 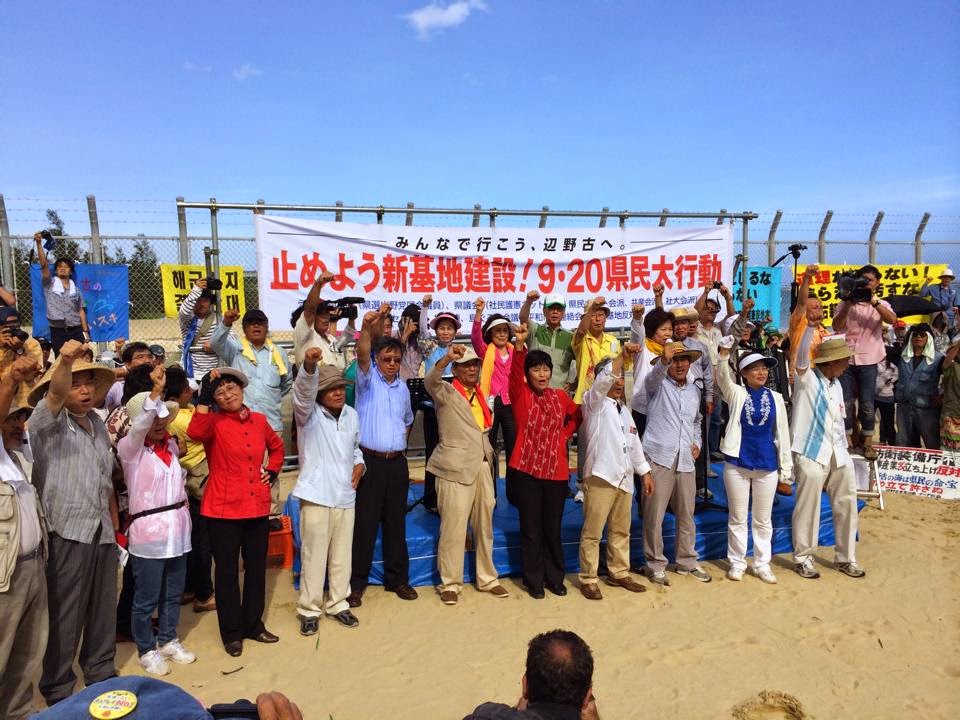 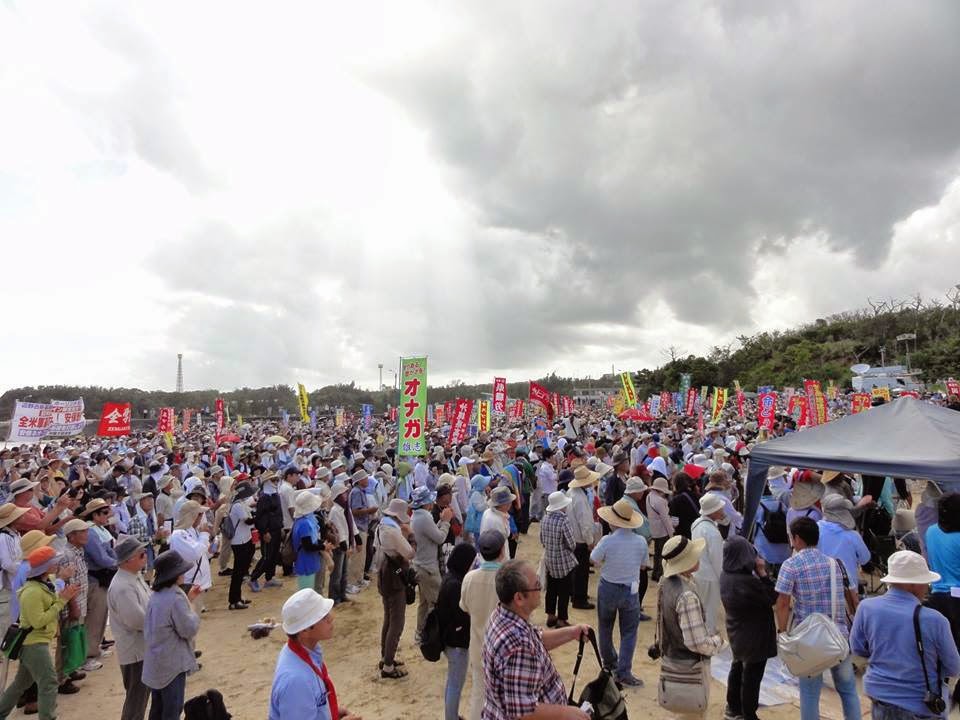 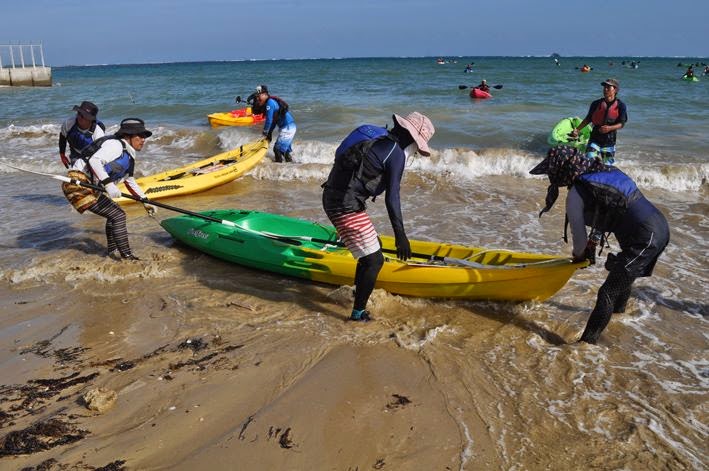 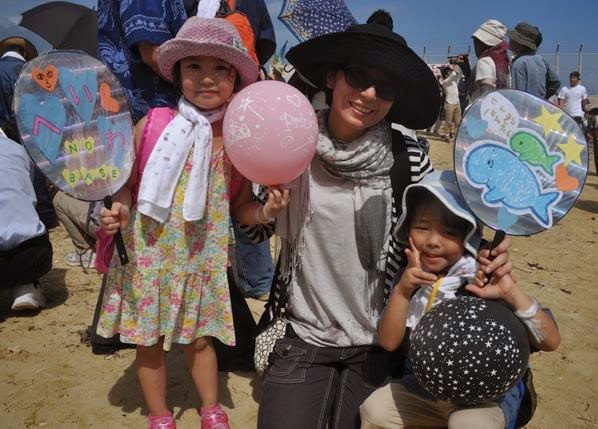 Henoko preservationism is a multi-generational family activity.
The grandchildren of these children will represent the Seventh Generation
of Okinawa's democracy and peace movement which began at the end of WWII.
The Seventh Generation is a Native American ecological concept that urges the current generation to live sustainably, for the benefit of the seventh generation into the future.
(Photo: Pietro Scòzzari) 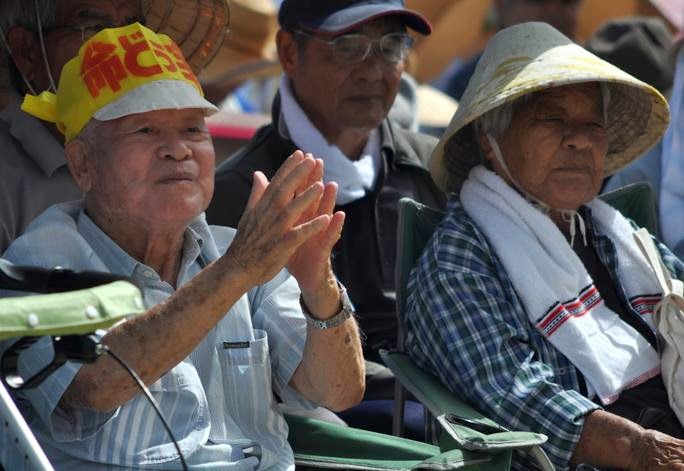 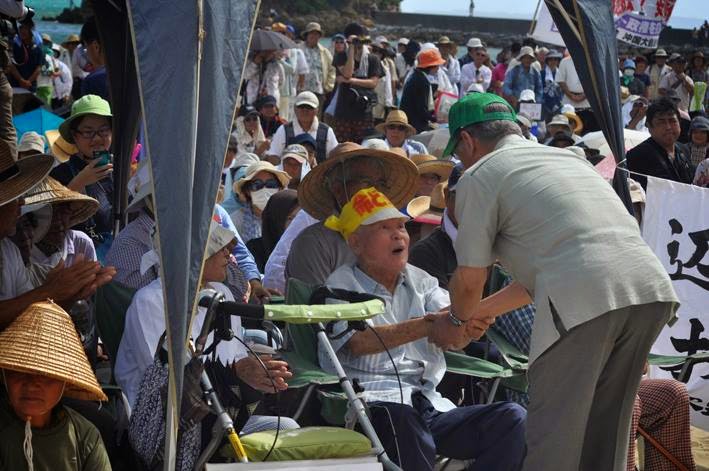 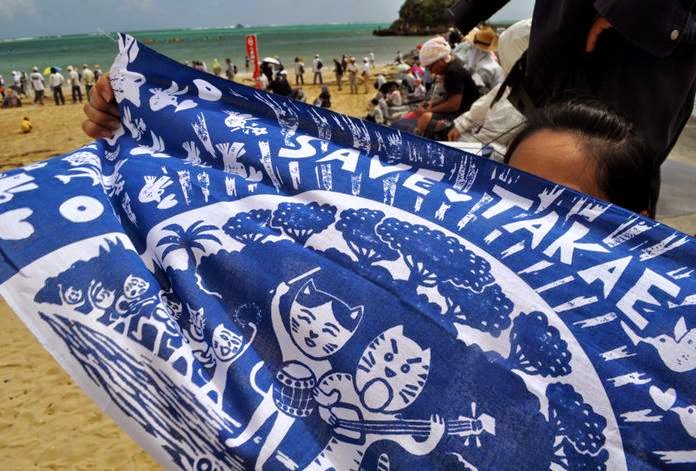 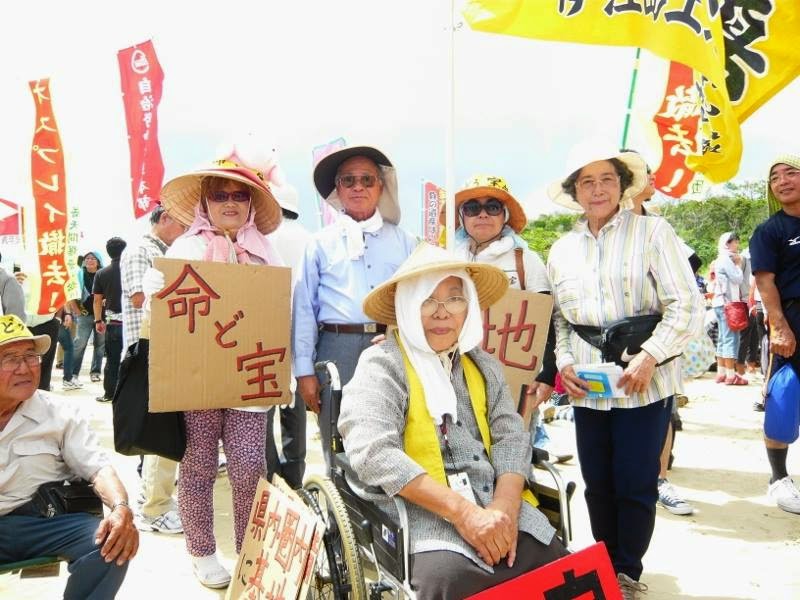 Wonderful photo of Ms. Etsuko Jahana, director of the House of Nuchi du Takara
(Life is Precious) at Iejima. The small island, just west of Okinawa Island,
is the birthplace of Okinawa's democracy & peace movement.
Jon Mitchell's description of House of Nuchi du Takara:
"Upon entering, visitors are confronted with a small set of bloodstained clothes
and the description that they belonged to an Okinawan child
stabbed by Japanese troops to keep it quiet when U.S. soldiers were in the vicinity.
Other displays record the postwar “bayonets and bulldozers” period when, in the 1950s,
the Pentagon violently seized farmers’ land to turn the island into a bombing range.
Exhibits include photographs of islanders’ homes razed by U.S. troops
and several dummy nuclear bombs dropped on the island during Cold War training drills."
(Photo by Kizou Takagaki, via Save the Dugong Campaign Center) 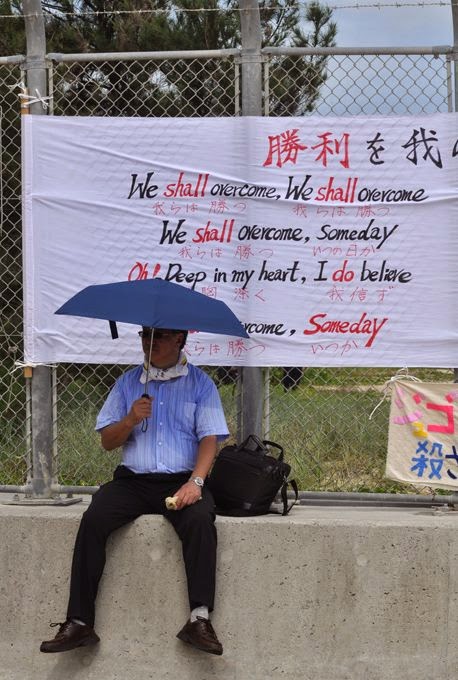 The Okinawan Movement draws inspiration from the African American Civil Rights Movement, including its anthem, "We Shall Overcome."
(Photo: Pietro Scòzzari) 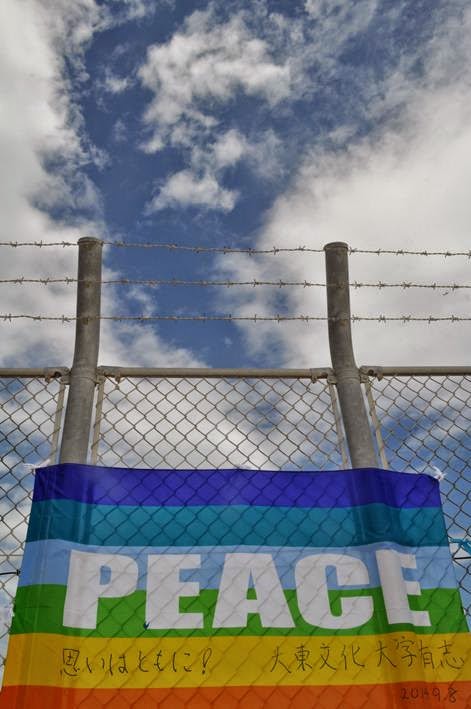 Henoko's signature Rainbow Peace Flag.
The rainbow flag has been adopted internationally as a symbol of the peace movement
and was first used in a peace march in Italy in 1961.
(Photo: Pietro Scòzzari)
Posted by TenThousandThings at 8:30 PM No comments:
Email ThisBlogThis!Share to TwitterShare to FacebookShare to Pinterest
Labels: animals, biodiversity, children, citizen action, community, democracy, elders, oceans, Okinawa, peace 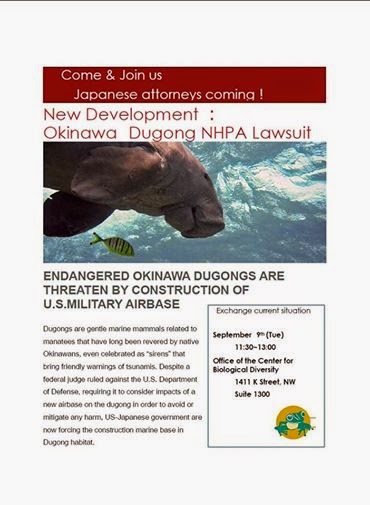 Via  JELF (Japan Environmental Lawyers Federation):  Everyone welcome at a Brown Bag update on the Dugong Lawsuit at the DC office of the Center for Biological Diversity with Peter Galvin, co-founder and director of programs. Date and time: September 9, 11:30 a.m.
Posted by TenThousandThings at 5:02 AM No comments:
Email ThisBlogThis!Share to TwitterShare to FacebookShare to Pinterest
Labels: animals, biodiversity, ecosystems, oceans, Okinawa 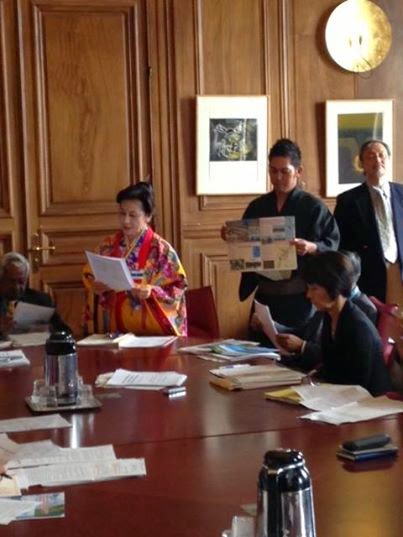