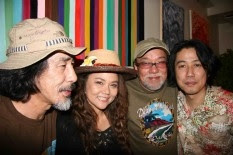 Musicians have long been known for offering some of the most cutting-edge and creative social critique around the globe, and Japan is no exception—particularly with regard to post-3.11 nuclear issues.

This past Sunday, November 25th, a No Nukes live event was held at Shin Sekai ("New World"), a small basement club in Tokyo’s Nishi-Azabu district, taking up the tradition of other local event series that have combined music with commentary on nuclear issues, including No Nukes More Hearts and Atomic Café.

The event was organized and headlined by the fantastically upbeat Inoue Ohana band, which features both Hawaiian and reggae tunes. The night’s lineup also featured many additional artists, including slack key guitarist Kamoku Takahashi, folk singer Yara Tomonobu, hula dancer Miho Ogura, and the legendary Rankin’ Taxi, whose video “You Can’t See It and You Can’t Smell It”(referring of course to radiation) went viral in the weeks following the Fukushima nuclear disaster.

The evening was billed as a “party”, and—capturing the spirit of the evening— the ever rabble-rousing Rankin’ Taxi followed up his performance of a song regarding the dangers of the precariously placed fuel rods at Fukushima Daiichi plant’s reactor #4 (whose video I had technical problems uploading—will try again shortly!) by commenting—in his trademark quirky and yet serious style— “Well, we shouldn’t really be having fun at a time like this, but hey, let’s have ourselves some fun!”

Each of the evening’s artists took time to reference the dangers of the nuclear power industry. Guest speaker Umi Hagitani, a social activist for numerous causes including nuclear issues, gave an illuminating overview of the workings of the nuclear industries and anti-nuclear activism in both Japan and the USA, where she has spent most of the past decade.

To summarize the highlights of Umi’s talk, she emphasized that we must consider nuclear issues as a whole, taking into account its various aspects, including uranium mining and testing, and the effects on (often indigenous) communities; as well as the interconnections between nuclear power, weapons, and testing, which are often overlooked in both countries. She pointed out that the mainstream media in the U.S. suppressed the voices speaking out against Three-Mile Accident in 1979, and that the government began almost immediately thereafter to promote the construction of nuclear power plants in other regions of the country—resulting in continuing environmental and health damage, along with citizen unawareness regarding what was actually taking place. She pointed in particular to the nuclear facility in Hanford, WA—profiled in filmmaker Hitomi Kamanaka’s “Hibakusha”—where radiation dating back to the early 1940’s has penetrated all the way down into the water table, causing numerous cancers (that were denied by the government as having any connection with the plant).

Umi pointed out the borderless nature of damage from the Fukushima nuclear accident, explaining that cesium is now showing up in Pacific herring in Alaska, which indicates that internal radiation exposure is something not limited to Fukushima or to Japan alone. She also asserted that lying governments and complicit media are a shared feature of both the United States and Japan, explaining that since 3-.11, anti-nuclear activists from the two countries have been working together to expose the way that the nuclear industry has been working to pollute the land where we live, while companies meanwhile continue profiting from decontamination efforts, and governments attempt to quash any citizen movements that speak out against negative effects such as rising illnesses and human experimentation.

“I recently watched ‘Women of Fukushima’, where one of the speakers said that if people in Tokyo did not begin speaking out about low-dose radiation exposure suffered by Fukushima citizens, their situation would never change,” Umi explained. “Given our privilege living in urban areas with access to all sorts of technologies, we need to raise our voices against these unjust systems by continuing to advocate for Fukushima citizens’ right to relocation, to support Fukushima citizen radiation efforts, and to educate ourselves regarding nuclear-related matters,” she said.

An interview with Umi in English may be downloaded from the website of the Nuclear Hotseat, and more information about her work is available at No Nukes Asia Actions.