Keigo Sakamoto cares for 500 animals inside the Fukushima Exclusion Zone 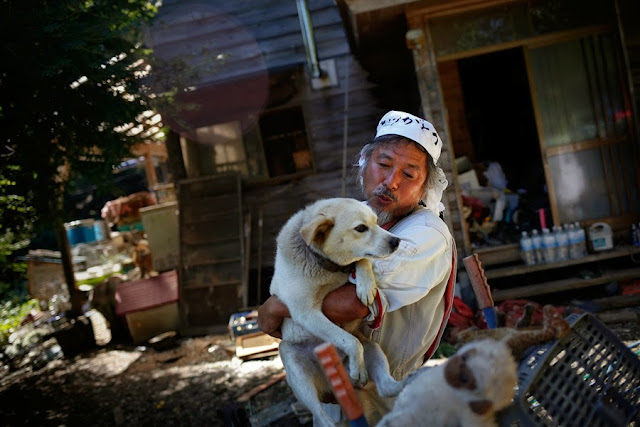 In September 2013, Keigo Sakamoto,  holds his dog, Atom. A farmer in Naraha, a town of previously 8,000 in Futaba district, Sakomoto refused to leave his home inside the exclusion zone.  He remained to care for  500 animals that owners were forced to leave behind when ordered to evacuate their homes and farms.

On March 11, 2011, the Japanese government began what was believed to be a temporary evacuation of residents who lived in the area surrounding the Fukushima Daiichi nuclear complex.  On March 12, and again, on March 15, the evacuation was expanded in size after several hydrogen explosions at the plant's reactors.  The evacuation zone, altered several times since 3/12, now includes eleven towns and extends up to 45 km from the nuclear meltdowns.

Initially the severity of the nuclear disaster was downplayed, leading residents to believe that their evacuation would be short-term and temporary. Thinking they could come back and get them soon afterwards, many evacuees left pets and farm animals with enough food and water for a few days.

Others did not want to leave beloved pets behind, even for a few days, and tried to bring their pets with them, but temporary shelters in Fukushima prefecture did not provide for pets until a "Pet Village" was open three months later,  in June, 2011. Faced without any other options, many refugees kept their pets inside their cars parked outside of temporary shelters; some even chose to stay inside their cars with their pets. (Niigata Prefecture, which accepted 10,000 nuclear refugees, had established a system to care for pets from the start.)

Animals left behind included dogs tied in backyards, cats in locked homes, and farm animals confined in barns and pens, without the opportunity to escape to forage for food and water.

Animal welfare groups scrambling  to feed and save animals throughout Tohoku's earthquake and tsunami-hit area also tended to and rescued animals within the overlapping nuclear exclusion zone for the first few weeks of the evacuation. However, their animal rescues were impeded when Tokyo enacted a strict “Do Not Enter” policy on April 22, 2011.

Animal Friends Niigata, HEART Tokushima, the Japan Cat Network (based in Shiga Prefecture, near Kyoto), and Animal Rescue Kansai (ArkBark) were some of the animal welfare groups that joined to form Japan Earthquake Animal Rescue and Support (JEARS) to support shelters caring for animals  affected by both the natural and nuclear disasters.(JEARS suspended its Facebook page in February of this year, directing animal supporters to member groups that are still actively caring for Fukushima rescue animals.)

Yoko Mieko, who lost four of her twelve cats during the disaster started a campaign for the rescue and care of animals left behind.  She regularly went into the exclusion zone to feed and rescue animals. On June 30, 2011, the cram school teacher issued a video plea, "Cry from Fukushima: Help animals around the nuclear plant" on YouTube.

Some individuals and animal welfare groups sneaked into the zone to attempt to feed and save animals. 1,500 dogs and cats were rescued the first six months.

Nine months later, when the severity of the nuclear meltdowns became undeniable, and  the public realized that the temporary evacuation order would not be lifted  as they were initially led to believe, the Japanese government gave into pleas from rescue groups asking that they be allowed to save any surviving animals from freezing to death during the winter. 16 humane groups were permitted to enter the zone from Dec. 7 to Dec. 27, 2011 where they were able to rescue some animals among the thousands they found starving, ill, and dead.

The United Kennel Club Japan (UKC Japan), was one of the groups that helped in this highly publicized rescue of hundreds of animals. UKC Japan is now caring for many of these animals at its shelter in Tokyo.

After some disturbing film footage of the rescue was aired on television, the Japanese government decided to refuse animal rescuers further entry into the zone, going so far as arresting Hiroshi and Leo Hoshi on Jan. 28, 2012, for not heeding the no-entry order.  The Hoshi family, at their own expense, had rescued over 200 animals.  The Hachiko Animal Federation is sponsoring a petition asking for their release, with the plea to Chief Prosecutor Toru Sakai, that such a release on humanitarian grounds would be just in that there was no criminal intent; the Hoshis were simply unable to witness suffering animals and do nothing.

The compassionate and heroic work of Keigo Sakamoto (and that of others who also stayed to care for animals left behind; residents who regularly visit their former homes to care for animals; Japanese and international animal welfare groups; and countless individuals in Japan and around the world supporting the humane treatment of natural and nuclear disaster animal victims) are some of the jagged silver lining stories of post-3/11 Japan. 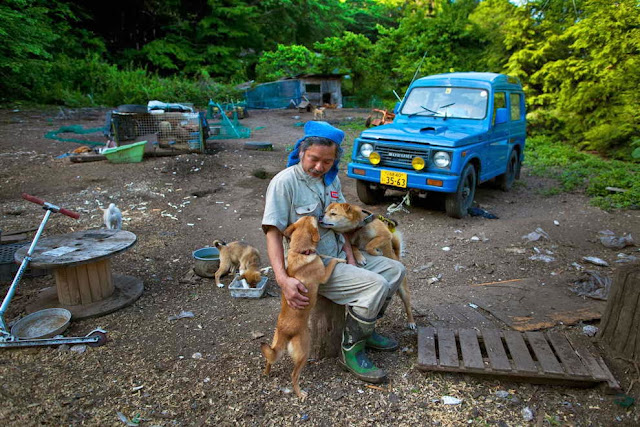 On June 8, 2011, Keigo Sakamoto holds two of his dogs in the front yard of his house. Sakamoto lost his livelihood as an egg farmer, but was allowed to remain in the exclusion zone to care for animals.
(Photo: AP Photographer David Guttenfelder on assignment for National Geographic Magazine)

"PROMETHEUS TRAP/ The disaster and animals: Woman repeatedly rescued pets in the Fukushima off-limits zone" (Article 8 of an investigative series by Misuzu Tsukue, Asahi, May 8, 2013)

"PROMETHEUS TRAP/ The disaster and animals: Pets forgotten in the mass evacuation" (Article 3 of an investigative series by Misuzu Tsukue, Asahi, April 26, 2013)

"Thousands of Animals Left to Die Around Fukushima" (Discovery.com, June 9, 2011)

God bless him. And I hope help will come.