Greens Japan back Kenji Utsunomiya as Tokyo gubernatorial candidate: "We won't forget the people of Okinawa and Fukushima." 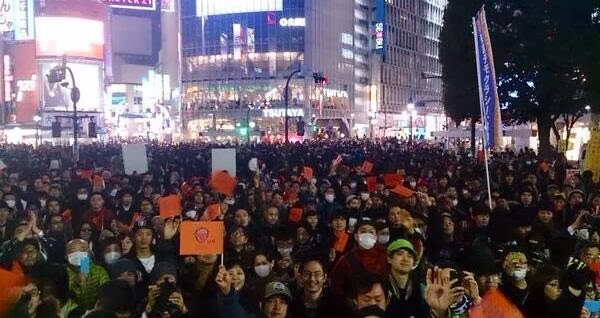 (Via Kenji Utsunomiya on FB)

Backed by the Greens, Utsunomiya came in a far second in the last Tokyo gubernatorial election. His campaign is considered a long shot by many; in 2012 he received around 15% (968,960) of the vote compared to LDP candidate Naoki Inose's 65% (4,338,936). However, analysts may be underestimating the momentum for democracy, social justice, and peace in Japan. Moreover, it's uplifting to see so many people in Tokyo express solidarity with the people of Okinawa and Fukushima, and who look at Okinawa as a source of inspiration for their own movement for participatory democracy.

Inose resigned in December, after one year of office, because of allegations of corruption. Utsnomiya's major opponents are LDP candidate Yoichi Masuzoe (an ally of current PM Abe), former PM Morihiro Hosokawa (campaigning with former PM Koizumi),  and General Toshio Tamogami. Similarly to Utsunomiya, Hosokawa  favors a nuclear-free stance and an environmentally-friendly Olympics; however the two candidates diverge on policy details, as well as overall vision. The other two are pro-nuclear and favor lavish spending on the Olympics.

Kenji Utsunomiya, a former president of the Japan Federation of Bar Associations, has dedicated his career to addressing structural poverty and social justice issues (including multicultural inclusion). He specialized in poverty-related law cases, including victims of predatory lending overcome the burden of multiple loans.  He served as honorary mayor of a makeshift village for homeless workers in Tokyo's Hibiya Park in 2008. He speaks to the plight of many, especially youth, who suffer from irregular employment, deepening structural poverty, and resulting increased homelessness in Japan.

Since the collapse of Japan's Bubble Economy in 1991 and, again, since the 2008 US housing bubble crash that affected the international economy, the postwar Japanese middle class society and Peace Constitution have come under assault.  The nation's zero interest rate policy (ZIRP) has long decimated any expectation of savings income for Japanese retirees, who have had to use up their shrinking principal for living costs. The current administration's quantitative easing monetary policy maintains a zero interest rate, thus creating easy money. This benefits speculative borrowers, fuels new bubbles, and hurts the ordinary Japanese person. 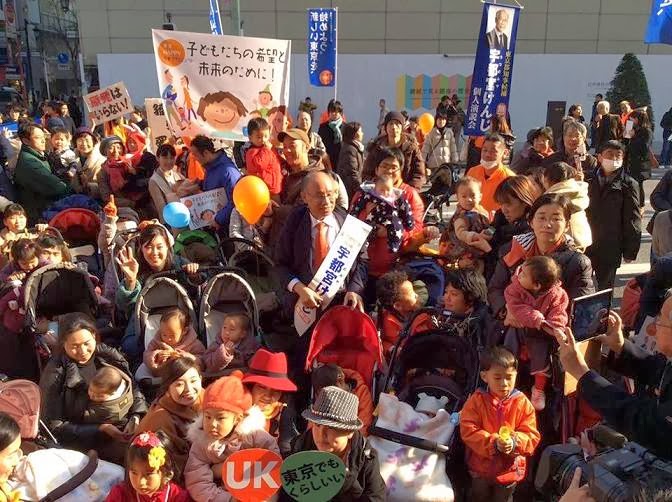 Surrounded by mother and children supporters at a rally in Ginza on Feb. 4.
Kenji Utsunomiya: "Childcare, work, education are serious issues."
(Photo: Kenji Utsunomiya on FB)

In a talk given at the Foreign Correspondents Club of Japan (FCCJ) in Tokyo, the charismatic candidate detailed Tokyo's many socio-economic problems and how he would solve them:

• 43,000 elderly individuals  in Tokyo are waiting to get into a care facility.

• Day care: The official number of children on a waiting list is 8,000 children, but the actual number is probably actually closer to 20,000.

• Under former Governor Ishihara, no new public housing was constructed. Meanwhile, 750,000 housing units are empty in Tokyo. Would introduce a program for Tokyo to pay rental fees of empty units and provide them to residents as public housing.

• Initiate a subsidy program for the working poor. Problem of employment a serious problem for young people. Sad truth young people in Japan no longer to have much hope. They are treated as temporary workers. Exploitative "black companies" that use up young workers. Outlaw them in Tokyo, to prevent people from dying from overwork.

• Support the movement for a nuclear-free Japan from Tokyo to other regions. Work to help the evacuees and victims still living in Fukushima.

• Stop the de facto revision of Article 9 by halting efforts to engage Japan in "collective defense."  Would work to defend the Japanese Constitution and to dispatch messages of peace to Asian neighbors.

• Simple and environmentally-friendly Olympics and Paralympics.

Utsunomiya responded to a question about the South China Sea tensions by saying that  the era of using war to resolve territorial conflicts is over. He added that diplomacy is a better way to address international disputes, and explained that Tokyo and other autonomous local governments are able to convey messages of peace to Asian neighbors, even if the national government is unable to do. He suggested that peace-based messages would ensure an amicable atmosphere which would foster the success of the Olympics.

Utsunomiya emphasized that the international sporting event, is, after all, a festival and celebration of peace and friendship.  He compared prewar aggression to increasing geopolitical tensions of recent years: Tokyo was supposed to host the 1940 Olympics, however this was not realized because the war between Japan and China began to escalate around that time. Also, in 1939, World War Two began in Europe.

When asked why he had not considered merging his campaign with Morihiro Hosokawa (they share a Nuclear-Free stance),  Utsunomiya replied that the former PM's association with Junichiro Koizumi, another former PM (2001-2006), was problematic. During his administration, Koizumi spearheaded neoliberal deregulation that deepened structural poverty in Japan. The insecurity of temporary workers, including loss of homes, may be traced directly to Koizumi's policies. Moreover, their platforms diverge on issues of  poverty, welfare, education, the Japanese Constitution, collective self-defense, state secrets, and the TPP.

In a Jan. 10 article at JT, Reiji Yoshida provides background on the Tokyo election:

Tokyo has as many as 10 million voters... Experts... said most Tokyo residents are unaffiliated swing voters without loyalty to any of the established parties...Their voting behavior is often affected by hot-button issues of the day or candidates who draw intense media coverage, rather than pork-barrel public works spending or organized election machines, the usual weapons for LDP candidates in local elections...

According to the Green Pages, a publication by the US Green Party, the Green Party (Midori no Tou) was formed in 2012 from a former party, Midori no Mirai (Green Future), to reflect Japanese nuclear-free,  fossil-free, environmental, pro-democracy movements. They support renewable energy, oppose the export of nuclear power technology, and the Trans-Pacific Partner­ship (TPP). Greens Japan calls for an economy centered on local production and consumption, improved social security programs through fair sharing of tax burdens, and revitalization of participatory democratic processes.