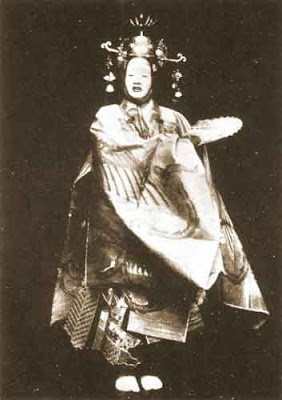 (Noh performer performing in Hagoroma. (Photo: sacred-texts.com (site has the full text of the play)


The 17th regular concert of ORA-J will be held on November 8 &10 in Tokyo and Chiba under my producing. I am planning to premiere a theatre piece Hagoromo which story is very famous in Japan and in 1995 it premiered as a music drama in Moscow as Japanese-Russian cooperation. This time I will use its 12 song melodies and ORA-J members including me will add instrumental sections for the drama with two singers.

This is an ancient story about a human who stole an angel's cloak, preventing the angel's return to heaven. This story probably goes back to Central Asian as variations of it exist in India, Persia, China, Japan, the Liu Chiu Islands and Sweden. The story of Hasan in The Arabian Nights is based on same theme.

According to Arthur Waley, the Noh version of Hagoromo was written by Seami, who begins by quoting a couplet from the Shih jen Yu Hsieh (Jadedust of the Poets), a Sung Dynasty poetry text popular in medieval Japan:


On a thousand leagues of lovely hill clouds suddenly close;
But by one tower the bright moon shines in a clear sky.