A win for the Japanese People who Conserve Article 9, for the Nobel Peace Prize, would “reorientate the prize to the core of Nobel’s original will.” 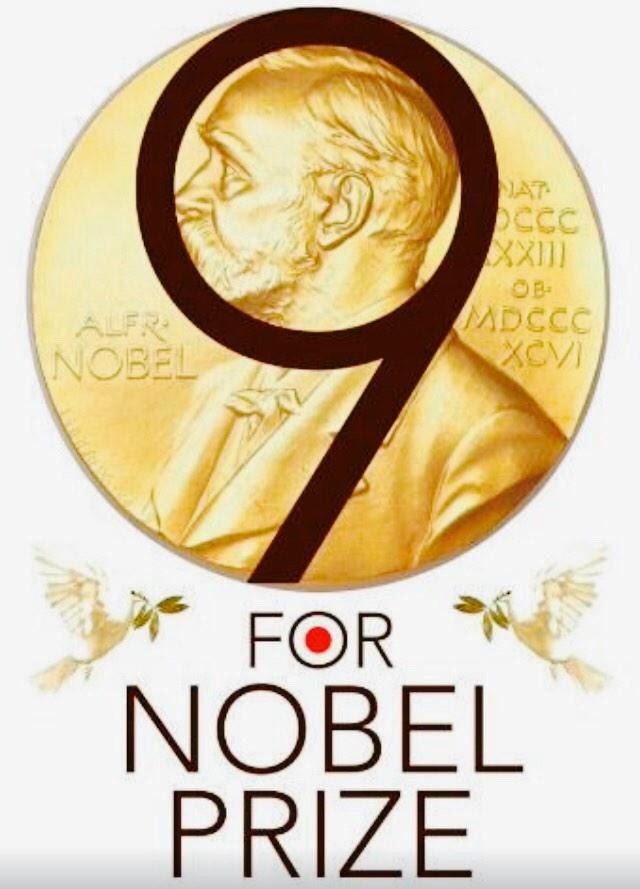 Congratulations to Kailash Satyarthi and Malala Yousafzay for being awarded the 2014 Nobel Peace Prize for their struggle against the suppression of children and young people and for the right of all children to education.

Although not selected as the winner, the people who support the Japanese Constitution's Peace Clause, Article 9, were a noted contender in this year's Nobel Peace Prize.

...Article 9 refers to a clause in the Japanese constitution, drawn up following World War II, that states that Japan will “forever renounce war” and the “threat or use of force as means of settling international disputes.” The Japanese government’s “reinterpretation” of this pacifist clause earlier this year sparked a public backlash, with campaigners arguing that the clause is one of the reasons Japan has not waged war in nearly 70 years.

Kristian Berg Harpviken, the director of PRIO [Peace Research Institute Oslo, an independent research institute] and a respected Nobel Prize commentator, recently chose this group as his top pick. He is the first to admit he doesn’t have a solid track record in predicting the winner, but he believes this could be the year for this off-beat choice. It would, he said, be a nod to nonaggression and would “reorientate the prize to the core of Nobel’s original will.”

On the other hand, the last two winners have been organizations -- in 2013, the Organization for the Prohibition of Chemical Weapons, and in 2012, the European Union -- and the committee may prefer an individual this year.

Background on Article 9 via Global Article 9 Campaign and Peace Boat, which received a nomination in 2009, on behalf of the Japanese people who support Article 9:


Adopted following World War II and the nuclear bombings of Hiroshima and Nagasaki, Article 9 is a pledge to Japan itself and to the world, particularly to neighboring countries that suffered under Japanese invasions and colonial rule, to never repeat its mistakes. Since then, Article 9 – and the Japanese people's commitment to its pacific principles – has played an important role in keeping peace in Japan and in the region, preventing Japan from participating in war and forcing the government to maintain peace policies.

Peace Boat launched the Global Article 9 Campaign to Abolish War in 2005, together with the Japan Lawyers' International Solidarity Association (JALISA) and sponsored by a coalition of civil society organizations in Japan. The Campaign has since received support from dozens of groups and thousands of individuals worldwide, including Nobel Laureates and key international figures. Over 33,000 people gathered at the Global Article 9 Conference it organised in Japan May, 2008...

On the significance of Article 9, Peace Boat Director and Co-Founder of the Campaign, Yoshioka Tatsuya says, “We believe Article 9 is a universal asset. Since the wars in Afghanistan and Iraq, it is clear that no solution can be achieved by military options. Today, we are facing climate change, poverty, pandemics. Given the limited world resources, the vast amount of money spent on military expenditures should be shifted towards building a sustainable future.”

JT's follow-up story reflects Japanese campaigners did not expect a win this year. Instead, they view the nomination process as an ongoing opportunity to highlight the history and merits of the Japanese Peace Constitution in Japan and abroad:


“To be honest, we did not necessarily think that our efforts would reach the goal in just one year,” said Yoshiaki Ishigaki, one of the leaders of a group calling itself the Organizing Committee for the Nobel Peace Prize for Article 9 of the Constitution. The group initiated contact with the Nobel Committee and honed its bid before the nomination was accepted....

He said that many Japanese are unaware of the role that Article 9, which bans Japan from using force to settle international disputes, has played in protecting them, and that future peace may be at risk under a government that wants to amend the Constitution to get around it.

The committee has collected more than 410,000 signatures over the course of its campaigning, but says it aims to collect 1 million for its renewed Nobel attempt next year.

Posted by TenThousandThings at 1:45 AM No comments:
Email ThisBlogThis!Share to TwitterShare to FacebookShare to Pinterest
Labels: Article 9, citizen action, democracy, Japan, peace

"Imagine all the people living life in peace." - John Lennon 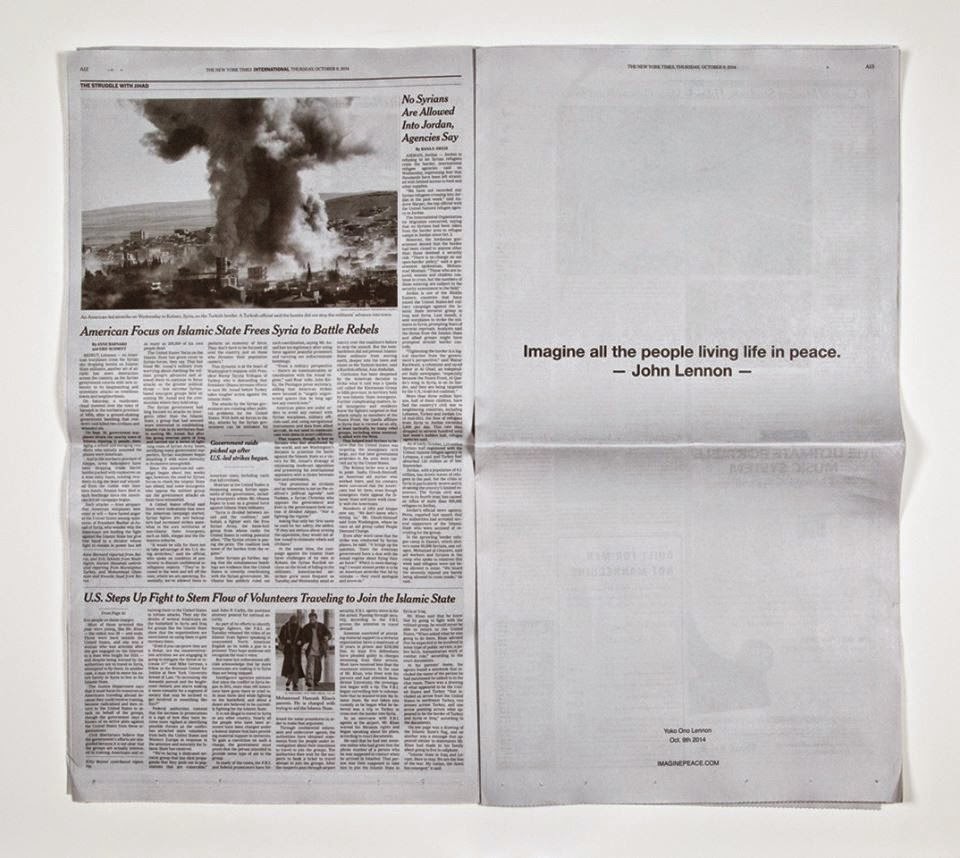 Via Yoko Ono: "Today's NYT."
Posted by TenThousandThings at 11:37 AM No comments:
Email ThisBlogThis!Share to TwitterShare to FacebookShare to Pinterest
Labels: peace

"Save Our SEA" Henoko photography exhibition now showing at National Diet Building, Tokyo; will open in Naha on Oct. 9 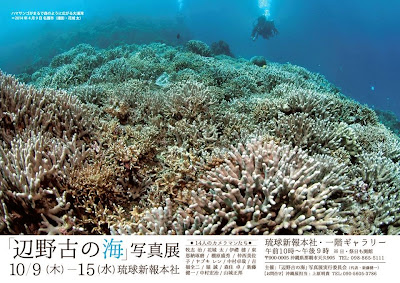 The "Save Our SEA" Henoko photography exhibition opens on Oct. 9 at the Ryukyu Shimpo Gallery in Naha.

The stunning show closed at a Ginza gallery on Oct. 2, and is now at the National Diet Building, Upper House Hall in Tokyo.

For admission to the Upper House, please contact by telephone, in advance, the following Office: Anyone can visit the exhibition. 6550-0907 or Fukushima Mizuho offices 6550-1111. sponsored by: representative of Henoko Sea Photo Exhibition Executive Committee K. Shindo 090 - 4813 - 5043. (Via photographer Ken Shindo)