Beautiful and heartrending trailer from Uncanny Terrain
a documentary film by Junko Kajino and Ed M. Koziarski,
who lived and worked with Fukushima family farmers struggling in the aftermath of 3/11

This film is a must for all who are continuing to "pray for Japan" — for all who support the safety of Japanese people and animals, the recovery of Tohoku, and the survival of traditional Japanese rural culture.

Fukushima, as with the rest of Tohoku, was a bastion of organic, natural farming; slow, traditional Japanese culture. The shock, trauma, and continuing nuclear radiation assaults that started on 3/11 has shaken the idyllic way of life and identity of Fukushima organic farmers to the core.  Now farmers, who worked to build up good, organic soil and food have undertaken the responsibility for ongoing decontamination and recovery efforts, while dealing with collective fears regarding radioactive contamination of their products and persons, and uncertainty regarding their future and that of their descendants in their ancestral homeland.

Since the March 2011 tsunami triggered the meltdown that spread radioactive contamination on much of the lush farmland of Fukushima and eastern Japan, the farmers have been caught between a government in constant denial of the risks of radiation, and outraged citizens who brand the farmers “child murderers” for continuing to cultivate irradiated land.

But the farmers, researchers and volunteers are committed to building a comprehensive monitoring and reporting network to inform citizens about contamination levels in food, air, water and land, so families can make their own informed decisions; and advancing experimental methods to decontaminate soil or prevent crops grown on contaminated soil from absorbing radiation.

Fukushima has demonstrated the need for greater public vigilance to keep all our food and energy producers honest, not just about radiation but about all the potential [pesticides, GMOs, industrial and other toxic] contaminants that our collective appetites introduce into our bodies and our communities.

For all who love traditional Japan, this is a film to support and see. Much more at the film's website: Uncannyterrain.com.
Posted by TenThousandThings at 1:12 AM No comments:
Email ThisBlogThis!Share to TwitterShare to FacebookShare to Pinterest
Labels: 3/11, farmers, Fukushima, Japan, nature, slow, Tohoku 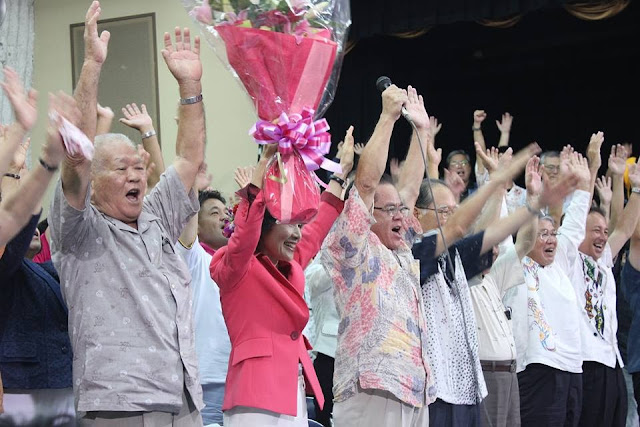 Congratulations to Ms. Keiko Itokazu, and her many supporters, on reelection to her Upper House seat!
(Photo: Keiko Itokazu on FB)


Keiko Itokazu, an Okinawan political leader strongly opposed to the proposed new mega-base at Henoko, Okinawa, was elected to a third term in the July 21 House of Councillors election.

Ms. Itokazu, head of the independent Okinawa Social Mass Party, beat Liberal Democratic Party (LDP) candidate Masaaki Asato, and other candidates in the Okinawa prefectural constituency where only one seat was contested this time.

In fall of 2012, she joined other MPs, Okinawa Prefectural Assembly members and local citizens in the all-Okinawa historic protest against US military V-22 Osprey flight training in Okinawa.

In January 2012, the regal political leader was a member of the 24-member Okinawan delegation that traveled to Washington and spoke with author and peace activist, David Swanson.

She is a co-chair of Okinawa Women Act Against Military Violence, together with Ms. Suzuyo Takazato, a globally recognized feminist peace activist who was nominated for a Nobel Peace Prize in 2005.

A native of Yomitan, Ms. itokazu served in the Okinawa Prefectural Assembly for three terms, starting in 1992, and was elected to the House of Councillors for the first time in 2004. After running unsuccessfully for governorship of Okinawa Prefecture in 2006, she was re-elected to the House of Councillors in 2007.
Posted by TenThousandThings at 12:00 AM No comments:
Email ThisBlogThis!Share to TwitterShare to FacebookShare to Pinterest
Labels: children, civilian victims of military violence, democracy, Human rights, Japan, Okinawa, peace, women

Portrait of a Weapon Inventor as a Young Man: Hayao Miyazaki's Kaze Tachinu (The Wind Rises)

Trailer for Hayo Miyazaki's Kaze Tachinu (The Wind Rises).  Based on the manga of the same name; in turn based on a short story by Tatsuo Hori, a prewar proletarian writer, poet and translator who died in 1953. Kaze Tachinu is a fictionalised biography of Jiro Horikoshi, chief designer of the Mitsubishi A6M Zero, a long-range warplane used in bombing raids and kamikaze attacks during the Pacific War.

Interesting timing on the release of this film. Miyazaki's films invoke nostalgia for traditional Japanese community, family, and rural life; and contain anti-war and environmentalist themes.  In May of this year, Toshio Suzuki,  producer at Ghibli, the studio which produces Miyazaki's films, unequivocally pronounced his support for the Japanese Peace Constitution in an interview with Tokyo Shimbun (English translation at Anime News Network):


Suzuki spoke his support for the clause, saying, ”We should be proclaiming Article 9, which has brought peace to Japan, to the rest of the world.” He added, “I doubt most people outside of Japan even know that we have Article 9. After all, we have a self-defense force. They probably know about that. That's why we have to spread the word about the clause to the world. This peace that Japan has wouldn't have been possible without it."

Suzuki came to know the future Ghibli director Hayao Miyazaki after Suzuki co-founded the magazine Animage for the publisher Tokuma Shoten. Miyazaki serialized his Nausicaä of the Valley of the Wind manga in Animage, and Suzuki participated in the production of Miyazaki's film version in 1984. When Ghibli separated from Tokuma Shoten in 2005, Suzuki was appointed to head the studio. Suzuki stepped down as the head of Ghibli in 2008, but he has remained an active producer on all of its films.

(July 21 update: Detailed analysis by Matthew Penney just published at The Asia-Pacific Journal on Hayao Miyazaki, war, peace, and Article 9; cites the filmmaker's belief that Article 9 should remain the cornerstone of Japanese foreign policy; and cites Studio Ghibli director (and Miyazaki collaborator Isao Takahata: “We sacrificed the people of Okinawa and became collaborators in [America’s wars].” )

(July 24 update: More background at Mainichi with a link to a Ghibli pamphlet outlining both the studio's and Miyazaki's support of Article 9.)
Posted by TenThousandThings at 3:36 PM No comments:
Email ThisBlogThis!Share to TwitterShare to FacebookShare to Pinterest
Labels: art, Article 9, democracy, films, Japan, Okinawa, peace

Have to share this magical photo of fireflies
taken by KJ's amazing web designer, Rick Elizaga!
For more of KJ, visit  Kyotojournal.org