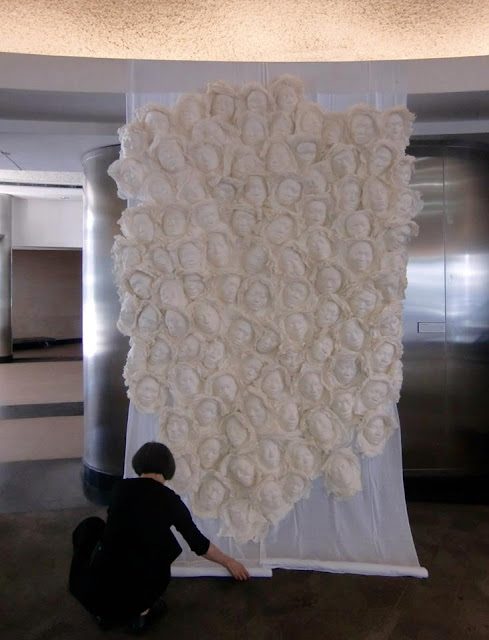 In "The Art of Symbolism in Peace Building," an Autumn 2014 presentation about the Peace Mask Project at TEDxKyoto, team member Kya Kim emphasizes that we are all co-creators of our shared world, and can choose to think and work for a peaceful present and future:


A divided world creates more insecurity and fear. And fear, too often results in violence. Trust is the courageous act of being the first to break through that fear and reach out to "the other." Peace Mask Project is itself an act of trust, from the idealism that inspires the effort to the individual act of being a Peace Mask Model to the support and participation of hundreds of individuals in a collective effort to advance into a sane and healthy future.

Today tensions are rising in East Asia and many regions around the world. Fear and insecurity are also on the rise. This tension we are seeing does not guarantee violence, but, instead, could be seen as a great opportunity.

Conflict is natural and always present. It is neither negative nor positive in itself. Violence and repression are only one possible response to a conflict and one our societies turn to far too often.

There are many reasons for this: the profitability of militarization for a handful of corporations and individuals; the control and manipulation of a population through fear. But mostly I think it's due to a lack of creativity and cooperation. We are stuck in old habits and old ways of thinking.

Today young people have an unprecedented understanding of the greater world. We are becoming increasingly aware of how we are interconnected and interdependent. We find beauty in other cultures. And by reflecting on our own, we are open to growth and to change. This is the reality of our future, and one that needs to be reflected in our societies. Conflict is no longer synonymous with war. It is, rather, an opportunity for growth, an opportunity for peace...

We hope that Peace Mask Project will provide a platform for their shared vision of peace, to build trust by building lasting relationships, and to help them become leaders of a better world...

We do not need for the conflicts of our time to erupt in violence or be resolved through aggression. Everyone of us has a role to play in determining the outcome of our shared conflicts.

How will we participate?

What opportunities will we present through our actions?

Which future will we choose?

Koshichi Taira: Thinking about True Peace during the 70th Anniversary of the End of WWII • Nago Museum Gallery • Aug. 14-30, 2015 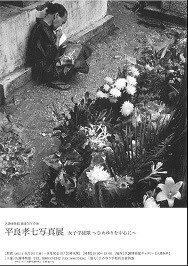 Koshichi Taira Photography Exhibition
Thinking about True Peace during the 70th Anniversary of the End of WWII,
focusing on the aftermath of the Himeyuri Student Nurses Corp.

Okinawan photographer Koshichi Taira's photography is as unblinking, empathetic, and profound as that of Japanese photographer Shomei Tomatsu.  But where Tomatsu is known (albeit not well known), there is almost nothing about Taira's brilliant work translated into English.

The Nago Museum's exhibition of Taira's photography, which opens today, invites viewers to think about the nature of true peace during the 70th anniversary of the end of WWII.

222 Okinawan female high school students, aged 15 to 19, were mobilized as the Himeyuri Student Nurse Corps in March, 1945 as the US-Jp battle in Okinawa began on the ground. (US bombing of Okinawa began in October 1944). During the battle, about 200,000 lives were lost, including 120,000 Okinawan civilians, one-third of the population. Among the Himeyuri nurses, 123 students and 13 teachers were killed.
Posted by TenThousandThings at 11:38 AM No comments:
Email ThisBlogThis!Share to TwitterShare to FacebookShare to Pinterest
Labels: civilian victims of military violence, Okinawa, peace, photography

Kenzaburo Oe: "Hiroshima must be engraved in our memories: It’s a catastrophe even more dramatic than natural disasters, because it’s man-made. To repeat it, by showing the same disregard for human life in nuclear power stations, is the worst betrayal of the memory of the victims..."

"Japanese Nobel Laureate Kenzaburo Oe on the 70th Anniversary of US Atomic Bombings of Hiroshima and Nagasaki," via Democracy Now!:


...KENZABURO OE: [translated] So, three years ago, the day after the disaster, the weeks after the disaster, I believe that all Japanese people were feeling a great regret. And the atmosphere in Japan here was almost the same as following the bombing of Hiroshima at the end of the war. And at that time, because of this atmosphere, the government at the time, which is the Democratic Party of Japan, with the agreement of the Japanese people, pledged to totally get rid of or decommission the more than 50 nuclear power plants here in Japan. However, the situation following the disaster, particularly in Fukushima, where so many people are suffering from this, has not changed at all.

And the current atmosphere or attitude of the government now in Japan has totally changed...the Liberal Democratic Party...led by Prime Minister Abe, is...completely having no regret and no looking back on ...what happened to Japan, and is instead actually actively pushing this forward. And I’m very fearful now that actually all throughout Japan and through the Japanese people, the atmosphere which is now growing and increasing is a spreading of this Prime Minister Abe’s ideology and worldview.

AMY GOODMAN: Yet he was elected as prime minister.

KENZABURO OE: [translated] Yes, he has won in two elections until now. But, however, now, because he has the majority in both of the houses of the Japanese Parliament, it means he is, in essence, able to do anything, go forward anything. And the first thing he is also trying to do now is to revise the constitution, which was created democratically by the Japanese people following the loss in World War II and Hiroshima and Nagasaki experience....

And now, under the current Prime Minister Abe administration, Japan is moving toward actively participating in United States wars. And what I am now most fearful about is the unfortunately likely possibility under Prime Minister Abe that this second pillar of Article 9 will be in danger, but not only this, that even the first pillar, that Japan may actually, within the next year or two or three or four years, actually directly participate in war...


Great video via Michael Penn of Shingetsu News Agency (SNA): Students Emergency Action for Liberal Democracy (SEALDs) protest against the Abe War Bill, forced U.S. military base construction in Okinawa, and in favor of the Peace Constitution, rule of law, and democratic society.

Michael Hoffman's "A political turning point for Japan’s youth," published at The Japan Times on August 1, 2015, explores the mass student movement for democracy and peace for Japan and Okinawa:

Years pass and nothing happens — then, suddenly, something does, and nothing is the same. What is the catalyst that turns passivity into activism? It’s like asking why this particular straw and not that one broke the camel’s back...

On July 1, 2014, the Abe Cabinet adopted a resolution sharply reinterpreting the Constitution as permitting what for decades had been regarded as forbidden: a global military role for the “pacifist” nation under the name “collective self-defense.”...On July 15, after a debate whose striking features were the vagueness of the government’s explanations and its hamfisted bullying of opposition lawmakers posing awkward questions, the Lower House voted, brushing aside the doubts of Constitutional scholars and of the public...

That was it. The camel sank to its knees...Sunday Mainichi magazine ventured a bold headline: “It’s begun — 300,000 people surrounding the Diet!”

That figure — 300,000 — is deeply significant. It takes us back to May 1960. The prime minister of the day, soon to be ousted, was Nobusuke Kishi, whose administration forced through the Diet a revised Japan-U.S. security pact in a manner strikingly similar to Abe’s handling of the current security legislation. Three hundred thousand is the prevailing estimate of the size of the enraged crowd that massed in front of the prime minister’s official residence, shouting for Kishi’s head. They got it. He resigned a month later. 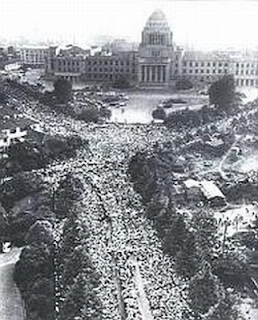