Historian Jeff Kingston: "The Japanese people who are proud of their pacifist constitution see Abe trampling on their values."

Video by Richard Grehan of last week's protests in Tokyo


People are outraged...People think it's unconstitutional, that he's trampling rule of law...Even though he has passed the legislation, it lacks legitimacy...Abe has delivered on all of the US wish list...

But the Japanese people don't buy Abe's argument that this is going to increase deterrence. Sure they think they live in a dangerous neighborhood, but they don't think this is the way to promote peace.

So the Japanese people who are proud of their pacifist constitution see Abe trampling on their values...Japanese people are concerned...they will be dragged into conflict by Washington..

Posted by TenThousandThings at 9:06 PM No comments:
Email ThisBlogThis!Share to TwitterShare to FacebookShare to Pinterest
Labels: Article 9, democracy, Japan, peace

Japanese citizens protesting as LDP/Komeito postpone Abe war bills until 8:50 a.m.; former Supreme Court justice warns the unpopular government that it is unlikely that the "unconstitutional" legislation would survive a legal challenge. 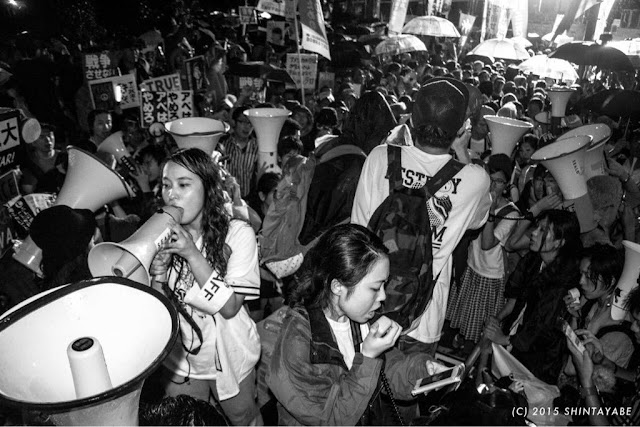 Update: Sept. 18 - A citizens’ group is preparing a lawsuit to challenge the constitutionality of the national security laws that were enacted on Saturday to the Japanese government to send soldiers to fight in foreign wars. The suit now has 1,000 plaintiffs, according to Jiji via JT.

Update: Sept. 17 - The opposition parties submitted a no-confidence motion to the committee chair Yoshitada Konoike. Then Masahide ("Moustache") Sato took over the chairman's seat, after which opposition members made very long speeches to defend the motion. However, following the script, the committee voted against the motion.

Then as Konoike returned to his chairman's seat, dozens of opposition members rushed towards Konoike, appearing as if they were trying to stop the voting on the bills. The "scuffle" made worldwide newspaper headlines.

Some analysts are asking why the opposition parties stopped blocking the entrance, and allowed the September 17 committee meeting to take place, knowing their no-confidence motion was going to, of course, be defeated.

In the meantime, over 200 lawyers in Japan have issued a statement calling the "voting" among the wild scuffling at the special committee illegal and invalid.

Many are asking why opposition party members allowed this final assembly to happen after they said they would do everything to stop the bills.

The not-so-young politicians inside the building must be exhausted.

Update 2:05 a.m. - The Upper House Special Committee on the Abe war bills has not started yet as of 2 AM in Japan. LDP/Komeito is planning to get the committee to vote for the war bills tonight.

If it begins, it will be livestreamed here: http://www.webtv.sangiin.go.jp/webtv/index.php.

The protest outside of the Parliament is being livestreamed now at Iwakami Yasumi journal:
http://iwj.co.jp/channels/main/ .

Along with the majority of the Japanese mainstream citizenry, cultural figures such as Nobel Laureate Kenzaburo Oe and filmmaker Hayao Miyazaki, former prime ministers, the majority of Japanese lawyers, including former Supreme Court justices are protesting the bill as unconstitutional.

Former Japanese Supreme Court Justice Kunio Hamada on Abe War Bills called the bills "unconstitutional and "illegitimate."  Hamada warned that it is “extremely optimistic” for the Abe government to think that Supreme Court will not rule against the legislation if its constitutionality is challenged in court.
Posted by TenThousandThings at 11:31 AM No comments:
Email ThisBlogThis!Share to TwitterShare to FacebookShare to Pinterest
Labels: Article 9, citizen action, democracy, Japan, Tokyo 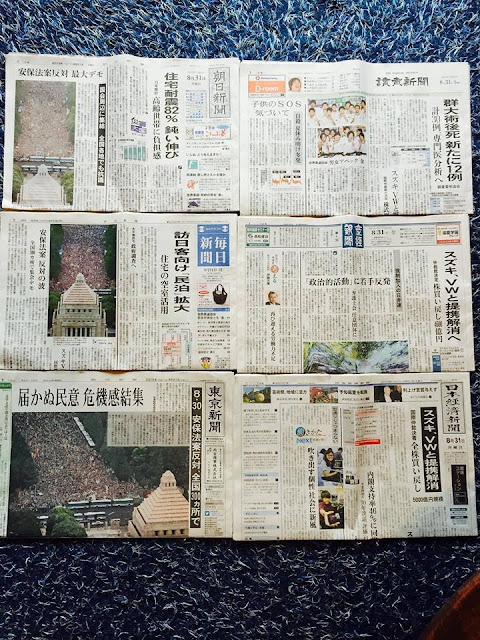