“I am here as a journalist, but first and foremost as a human rights activist”: Iraqi correspondent Isam Rasheed visits Japan, urges focus on war’s human costs 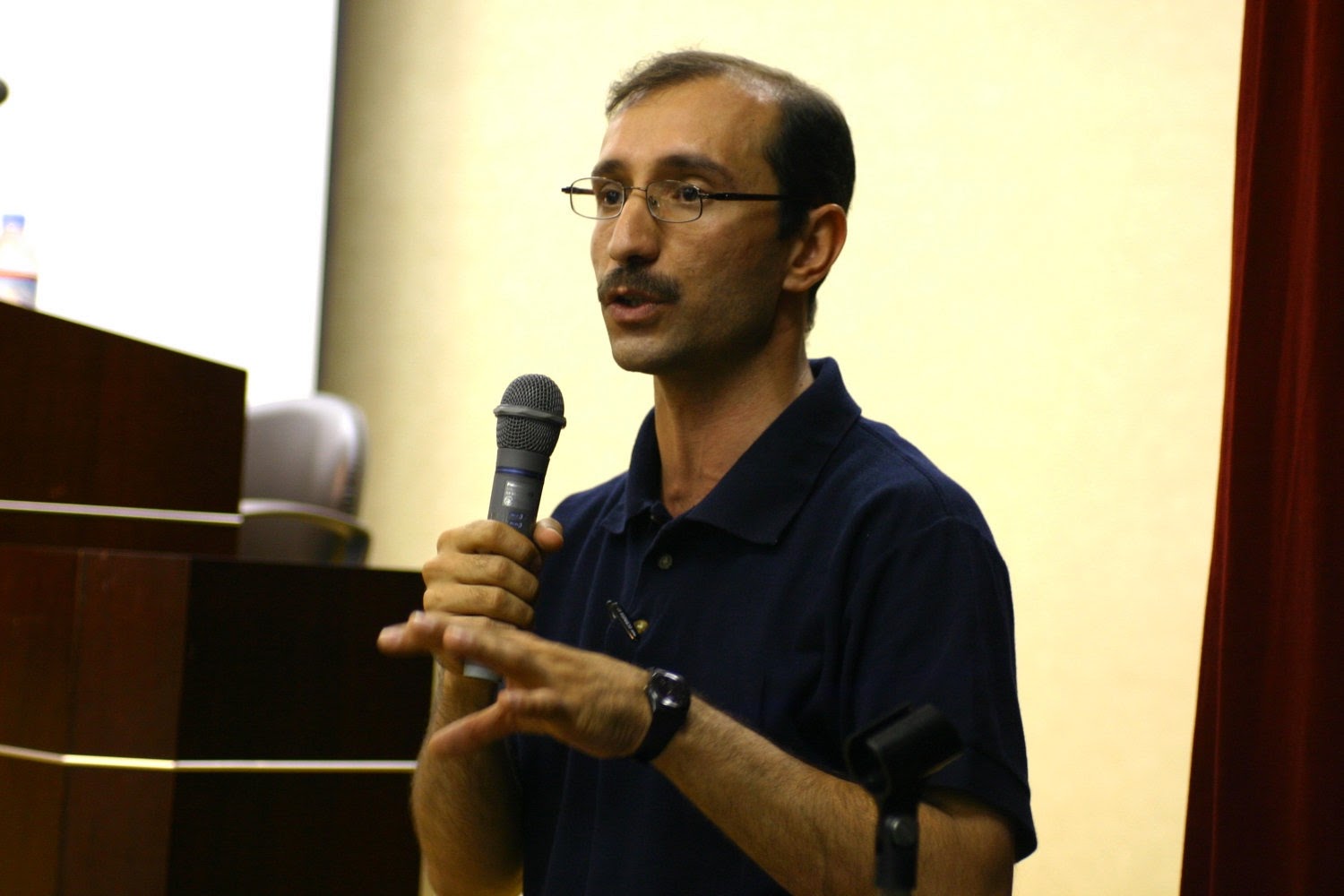 Isam Rashed, an Iraqi journalist whose work appears regularly in Inter Press Service news reports, gave a talk and video presentation on the evening of Wednesday, June 14th in Tokyo’s Bunkyo ward as part of an event co-sponsored by Iraq Hope Network and World Peace Now—both of which are coalitions of smaller Japan-based NGOs and grassroots citizens groups.

Rasheed told the audience of several hundred people that although he was visiting Japan in his capacity as a journalist, his ultimate purpose was as a human rights activist committed to getting the word out as widely as possible regarding the widespread suffering among his people at the hands of the U.S. military occupation.

Rasheed showed two video films documenting the human costs of the war that have befallen the citizens of Fallujah, including “Caught In the Crossfire," a documentary film that was shot between November 2004 and April 2005 as a collaborative project between Iraqi and U.S. filmmakers, including himself and Mark Manning (The Road to Fallujah).

The images spoke for themselves in terms of the horrific suffering that has continued to plague the people of Iraq: listless children with torn limbs; men whose dead bodies have been riddled with various tortures; a young woman who has lost an eye in addition to two of her children. These tragic scenes were then suddenly interspersed with a simulated look through the viewfinder of a Apache helicopter-making the contrast between the cold technological apparatuses of the U.S. military and the suffering on the ground all the more grippingly poignant.

Rasheed also pointed out that what happened in Fallujah also repeated itself in the city of Ramadi, whose citizens were suddenly ordered to evacuate the city this past April despite the fact that most had no other shelter to turn to. Many ended up in mosquito-infested desert encampments with filthy water and little food, and those who stayed behind were left (and continue to remain) as virtual prisoners in their homes. Many civilians have been wounded or killed by the ensuing attacks, and essentially remain trapped inside the city with dwindling lifelines of food, water and electricity.

Rasheed lamented the “dirty” way in which the U.S. continues to conduct this war in his country. He explained that medicines to soothe and care for the wounded remain scarce, and young men are being taken away and incarcerated en masse by the U.S.-trained Iraqi police. Anyone moving about is required to pass through multiple military checkpoints, where civilians are forced to wait in line for several hours and then subjected to humiliating searches that essentially treat them all as criminals.

“Is this really U.S. style democracy?” Rasheed asked pointedly. He also charged that the U.S. has deliberately utilized divide-and-conquer tactics, such as pitting Sunni against Shia where such divisions hardly existed in the past, and deliberately infiltrating the police force with guerrilla-like death squads. Such moves, he suggests, have been useful for deepening the justification for occupation (i.e., more dead Iraqis mean more reasons for the U.S. to stay and offer protection).

Sharing the stage with Rasheed at this event was moderator Nahoko Takato, a humanitarian aid worker  working with the Iraq Hope Network who expressed similar distress regarding the conditions that she witnessed while working in Iraq. Her blog,  the Iraqi Hope Diary, details accounts received regularly via e-mail  from a friend in Ramadi that offer a gripping firsthand account of how dismal life has become in the city. Recently, Takato received word from the author of these accounts that his brother died on June 12th from loss of blood after being injured in a car accident and then detained at a U.S. military checkpoint on the way to the hospital.

"The concept of our project is 'reconstruction, not destruction,' but how will my friend react now after the loss of his brother?" Takato wrote in a recent blog entry. "I pleaded with him to channel his heartbreak and rage into continuing to write to us about what was happening in Ramadi, instead of picking up a weapon. After considering the matter, he finally told me not to worry because he was committed to protecting his family through peaceful means."

Throughout the evening's presentation, Rasheed repeated different variations of a singular gripping question: How would you react if what was now happening in Iraq was happening instead to you and your family? He invited each of us in the audience to go beyond the video game-like presentation of war that has been offered to us by the mainstream media, and actually imagine what war feels like.

Could we imagine, he asked, the terror that we and our loved ones would experience upon being awakened from a peaceful sleep in the middle of the night as our home was suddenly and violently busted into by foreign soldiers? How would we feel, he continued, if we were then subjected to invasive body searches, as was the case for Rasheed and each member of his family--including his 85 year-old father and five year-old son? Could we even begin to conceive of the pain, he asked, of those who have lost everything through violent means--family members, home, possessions--while continuing to be treated as virtual prisoners on their own territory?

Listening to Rasheed’s accounts of the events that unfolded in Fallujah--particularly when he described an incident whereby citizens who were first ordered to leave the city were then later prevented at gunpoint from crossing a bridge to escape--reminded me of the situation of martial law that befell the city of New Orleans following Hurricane Katrina. While there is obviously no parallel to be made here with the situation in Iraq, the increased militarization of cities and borders that is now taking place inside the U.S. should give us pause regarding the callous way that our government responds to human needs during times of crisis even in our own country.

This challenge that Rasheed offers us—to put ourselves in the position of suffering that is now the plight of the Iraqi people—is a powerful one that carries the potential to determine whether or not the fatal spiral of violence will finally be put to rest. For those of us who understand that labels such as “allies” vs. “enemies” and “insurgents” vs. “freedom-fighters” are false dichotomies that rest upon nothing more than the fragile matter of perspective, this leap is not a difficult one to make. Call it the cycle of revenge or call it pure karma, but in either case, it is clear that the task before us is to come face to face with the worst of all possible horrors, tortures, and suffering--and then imagine them being inflicted upon those who are closest to us.

Americans who refuse to allow the tables to be turned, however, and continue to insist that we are still the “good guys” while ignoring bad news such as the recent Iraqi ambassadorial memo    and the tortures perpetrated by the U.S. military against Iraqis, must understand that this failure to empathize with others' suffering will ultimately continue to bring tragedy to all parties involved.

Rasheed cautioned, for example, that Iraqis and others in the Middle East are starting to no longer automatically make distinctions between the U.S. government and its citizens. And if the U.S. continues along the same path, he said, he feared that it would be quite possible that Americans would be shown little mercy in the future. Indeed, the fate that befell the two recently kidnapped U.S. soldiers, should help drive home the point that any suffering unleashed can and will come back to confront head on those who are perceived to be its perpetrators.

Rasheed emphasized, however, that his intent was not to encourage ill will toward ordinary American citizens, and that his interactions with committed U.S. peace organizations such as Code Pink, Global Exchange, Christian Peacemaker Teams, Voices in the Wilderness, etc. have helped him to remain aware of continuing principled opposition to the war in Iraq that does exist within the U.S.

“The situation in our country has become so bad that no one knows who they can trust anymore,” Rasheed explained. “I just want to spread the word as far and as wide as possible about what is really happening to us.”

New petition sponsored by the Iraq Hope Network to stop the violence in Ramadi and abide by international law in Iraq: http://www.thepetitionsite.com/takeaction/507914513

Initiative asking voters to pledge to choose only candidates who commit to withdrawing troops from Iraq: http://www.votersforpeace.us/