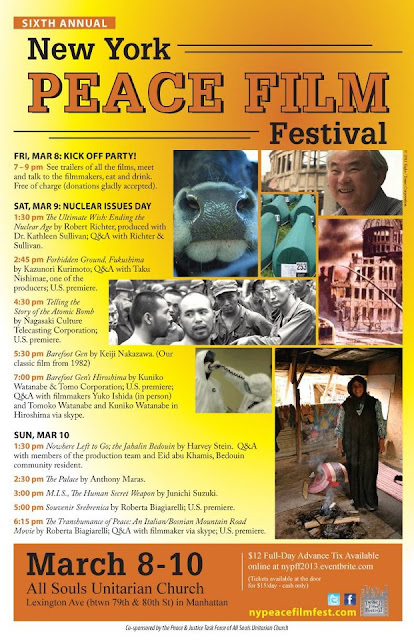 English version of "Barefoot Gen's Hiroshima" trailer!
Showtime: Sat. March 9, 2013 @ 7:00pm.
Director, Yuko Ishida will join us from Tokyo
and we'll also connect to Hiroshima via Skype for Q and A!
Posted by TenThousandThings at 9:11 AM No comments:
Email ThisBlogThis!Share to TwitterShare to FacebookShare to Pinterest
Labels: citizen action, festivals, films, NYC, peace, peace networks

On September 4, 1955 – exactly 40 years to the day before the 1995 gang kidnapping, beating, and rape of a 12-year old Okinawan girl – an American soldier, Sergeant Isaac Hurt, kidnapped Yumiko Nagayama as she was walking to kindergarten. Then he raped her, disemboweled her, and threw her into a military base garbage dump. Less than a week later, another US soldier raped another child.

The rape-murder of Yumiko-chan  took place during "Bayonets and Bulldozers" – a period of US forced seizure and destruction of 50,000+acres of land (including entire villages), to make build military complexes across the islands. The seizures – usually at gunpoint – left 250,000 Okinawans homeless and without means of livelihood.  Because the US did not allow Okinawans any real legal protections, Okinawans had no legal recourse against the US military violations of their property rights and human rights.

Okinawan mass protests, marches, and sit-ins date back to this period because the people had no legal power to resist the US use of force against them.  The pattern of American soldiers taking young girls from civilian houses at gunpoint to rape (and even murder them) began during the early days of the US occupation of Okinawa and worsened during the 1950's violent period of "Bayonets and Bulldozers."  At this time, the US military rape of women and children became synonymous with the rape-like taking and destruction of their land.

The 1955 murder of Yumiko-chan outraged the Okinawan public, sparking what Okinawan  Moriteru ARASAKI calls the first wave of the Okinawa Struggle for human rights and property rights. Okinawan resistance culminated in the 1956 "island-wide struggle" (shimagurumi toso) challenging US military  domination.

Korean American filmmaker Annabel Park's five-minute video interview of Hirotoshi Iha brings us back to 1955 by illuminating how deeply Okinawns have been injured by the pattern of US violent violations of human rights, land rights, and also why the US and Japanese governments have never been able to extinguish the Okinawan struggle for rights, self-determination, safety from US military violence, and peace.

Filmed in Takae in 2010, Mr. Iha explains why he became an activist and the deep meaning of the "Heart of Okinawa."  Yumiko-chan was his cousin.

The life-long activist then explains why the majority of Okinawans don't want  Futenma training base "transferred" to Henoko: "because we know the human cost of it."
Posted by TenThousandThings at 5:52 AM No comments:
Email ThisBlogThis!Share to TwitterShare to FacebookShare to Pinterest
Labels: children, citizen action, Okinawa, Pacific War, peace 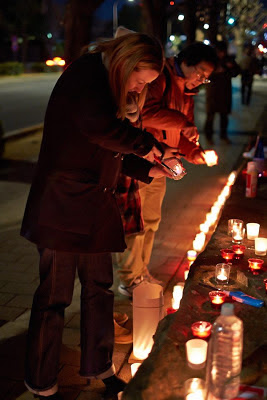 Via our friend, Jacinta Hin

We are planning a series (day) of events on March 11 both in remembrance of the Tohoku Earthquake, Tsunami and the Fukushima Nuclear Plant disaster, and in support of the global stand for a nuclear-free world.
Please join us on this special day, either in person or remote from anywhere in the world.

Join in person, in Tokyo:

We will get together from 1.30pm in Yoyogi Park. At 2.46pm, the time that the Earthquake struck, we stand still in silence and meditation to honor those who lost their lives and everyone affected by the horrendous events of March 11.

From 6pm we will get together for an evening of candlelight, music and…being peacefully together with people who share the vision for a nuclear-free Japan and world.

Join from anywhere in the world:

We want to create a chain of 311 candles around the globe. People can join the chain anytime on March 11, preferable from 2.46pm Japan time onward. For this we will be inviting people from around the world to participate. Please help us by suggesting anyone or any groups who might be interested. Post here or facebook message or email Jacinta (jacinta.hin@embrace-transition.com).

More details will be announced shortly.

Beautiful Energy is an IMA project and movement born out of the weekly Friday anti-nuclear demonstrations in Tokyo in front of and around the Prime Minister Residence and Parliament. Through inspired, peaceful action we stand for a nuclear-free world that thrives on renewable energy. Our current, ongoing project is Candles for Peace. Every Friday, from 6-8pm Japan time, we gather in front of parliament in kokkai gijido, joining the weekly anti-nuclear protest, and create a beautiful display of candlelight to symbolize our intentions. Intrepid Model Adventures (IMA) is a nonprofit, open community of hundreds, supporting thousands, standing for positive social change. IMA members share a desire to help and strive to live their lives in such a way that they may act as a positive influence.