"...rather than go backwards, we ought to move forward: towards a vision of a world without war. A world where every nation would have a clause No. 9 in its constitution." 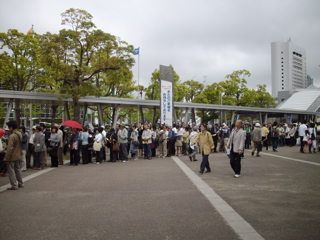 Standing Room Only: Around 3,000 people standing in line for entrance
into the Global Article 9 Conference to End War had to be turned away

In 2003, a global network of NGOs formed the Global Partnership for the Prevention of Armed Conflict (GPPAC) to voice opposition to the US/UK invasion of Iraq. Two years later, GPPAC declared a global appeal to incorporate the Japanese Constitution's Peace Clause, Article 9, into efforts to support world peace at the Northeast Asia Regional GPPAC Meeting and at the GPPAC Global Conference, at which the Global Article 9 Campaign was founded. Peace Boat, a Japan-based international NGO, and the Japan Lawyers International Solidarity Association (JALISA) have been the effort's organizers, supported by 88 co-initiators based in Japan.

The gathering was a passionate gathering of military and civilian survivors and descendants of survivors of war and militarism of the Pacific War, who remember the devastation and human costs, and who say "No More".

Elder women and men wearing Article 9 lapel pins; children holding their parents' hands, groups of nuns dressed in traditional habits;  and younger people in T-shirts made up a river of people streaming into the Makuhari Messe convention center, in eastern metropolitan Tokyo, where the conference was held. Over 30,000 people attended this peace conference dedicated to protecting Japan's Peace Clause and spreading its ideals throughout the world. Around three thousand people waiting in a line the size of a football field had to be turned away for lack of space.

The conference began with a program, "Article 9 as a hope for the world" in a darkened hall filled with thousands of people. 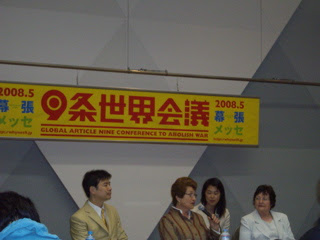 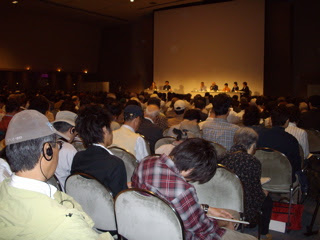 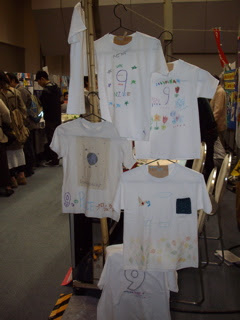 One of many grassroots projects at the conference: Article 9 T-shirts made by children. 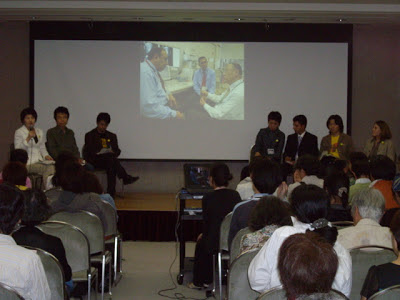 Dozens of people had to be turned away from the crowded room where the
"Iraq, U.S.A., and Japan" panel discussed the role of the Japanese
government in the Iraqi occupation. 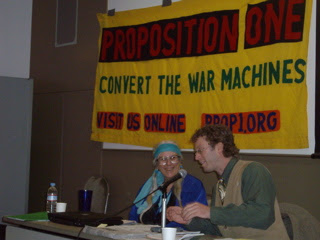 Ellen Thomas, of Proposition One, an international nuclear weapons abolition initiative,
and Jay Marx, of the Washington Peace Center,
discuss the rational basis of peace activism. 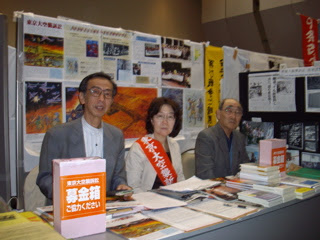 116 lawyers are representing over one hundred Tokyo firebombing survivors
(wearing red sash) in their lawsuit against the Japanese  government
for not compensating civilian survivors of the Tokyo firebombings
and for not memorializing their losses and suffering.

They are also demanding an apology from the Japanese government which
instead of memorializing firebombing victims,
honored Curtis LeMay, strategist of the bombing of
(civilian targets) in Tokyo and all major Japanese cities (except Kyoto).


The survivors have joined together with Hibakusha and Chinese survivors of the
Japanese imperial military terror bombings of Chonqing to speak out
about the deaths and suffering of civilians as targets during the Pacific War. 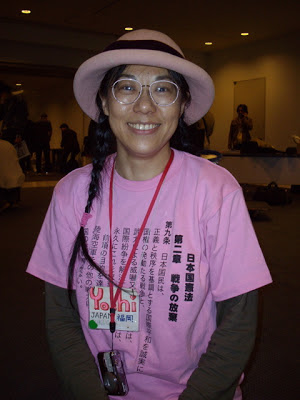 Yoshi Kuzume, one of many examples of grassroots women's activism in Japan,
promotes peace by handing out T-shirts, emblazoned withArticle 9
in Japanese in the front, and in English on the back.
Kuzume, who teaches Chinese at Seinan Gakuin University, wants to
increase awareness that Japan has not gone to war in sixty years, in
contrast to the decades of military aggression before the end of the Pacific War.

Kuzume studied in China in the 1980's, and found that Chinese people
were moved when she explained Article 9 to them. Despite the fact
that Japanese people have overwhelmingly supported and protected Japan's
Peace Clause (against the attempts of some in the Japanese government,
urged on by some in Washington, notably the Nixon and Bush administration)
to overturn Article 9) is not well known outside of Japan. 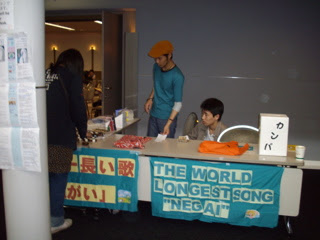 Singing for peace – A Japanese schoolteacher is spreading the
song "Negai" ("Our Wish") throughout Japan and the world,
to demonstrate the wish of children for peace.
"Negai" has been translated into 31 languages,
and has been sung in Taiwan, Finland, Iran, Korea, and Kenya. 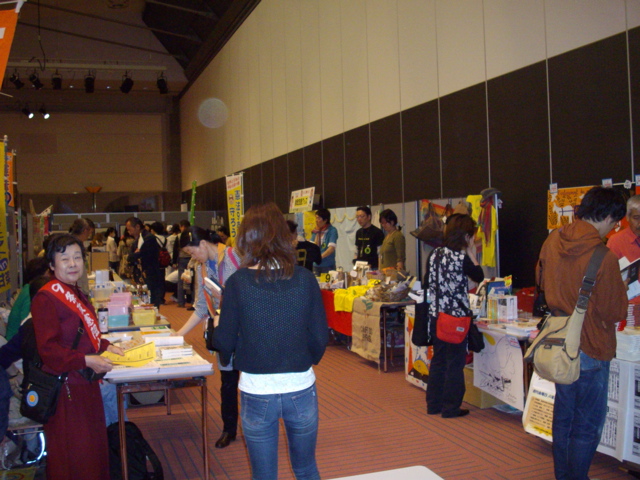 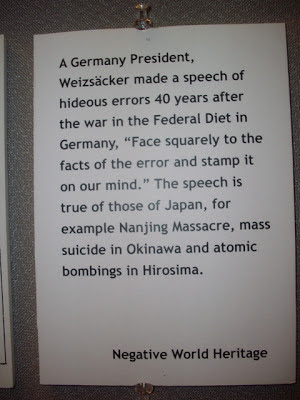 The "Negative World Heritage" art exhibition refutes the triumphant
view of war in world history and calls for honestly addressing the
histories of the Nanjing Massacre; forced mass suicides in Okinawa; the
atomic bombings in Hiroshima and Nagasaki. 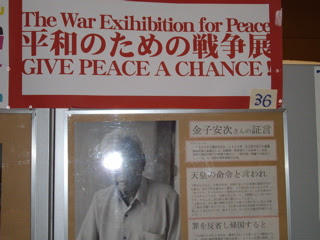 The Anti-War Exhibition for Peace is a nationwide movement
based in Saitama, a prefecture just north of Tokyo. So far, 3,000,000
visitors have visited exhibitions across Japan for over 25 years.
The group exhibits at Saitama City Hall and other venues throughout Japan
on time-limited schedules (in contrast to peace museums that are open year-round).
In partnership with peace groups, they organize around 150 exhibitions annually.

The Anti-War Exhibition for Peace also invites international speakers and

witnesses to its events that address Japan's wartime history and the
Japanese government's escalating involvement in US-led wars & military conflict.
Organizers lead discussions about  alternatives to war and armed conflict:

"Invading China in the 1930's and Southeast Asia in the 1940's, Japan had been going to war almost once every ten years, until the end of World War II. These wars were fought at the cost of three million Japanese lives and twenty million lives throughout the rest of Asia.

Apology for these sins has remained only nominal to this day. Even a 'revisionist' movement has been gaining momentum in the area of history. Standing in opposition to such reactionary trends, the Antiwar Exhibition for Peace provides the general public with valuable opportunities to learn about the hard facts of Japan's past aggression. The Antiwar Exhibition for Peace promotes peace education throughout the country in the belief that each one of us, not just international organizations and governments, should act as a peacemaker." 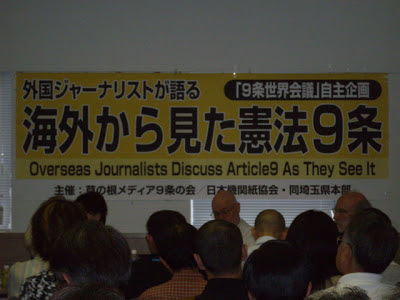 Filmmaker John Junkerman, director of Japan's Peace Constitution (2005),
participates in a discussion about Article 9 with other journalists. 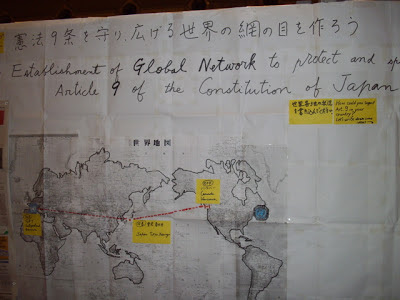 Vancouver Save Article 9 -- based in Vancouver
was the 1st group outside of Japan) to spread news about Article 9
and how Japan's constitutionally guaranteed minimization of militarism
has indeed resulted in a more stable East Asia and world.
The movement demonstrates that nonproliferation and limiting militarization
are viable and better methods of securing authentic peace
throughout the world than destabilizing  nuclear proliferation and arms races. 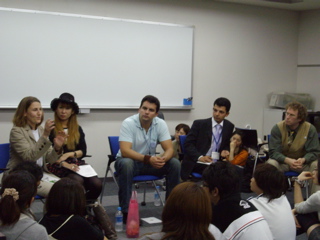 After the conference,Tokyo area university students hosted
a panel discussion on the links between the US war in Iraq
and the Bush and Koizumi administrations' attempt to overturn Article 9.
Conscientious objector and Iraq war veteran Aidan Delgado
and Kasim Turki, a former soldier in the Iraqi Republican Guard, now an Iraqi aid worker, Jay Marx of Washington Peace Center, singer Amamiya Karin and Kim Hughes, a translator, university teacher, and community activist living in Tokyo participate.

"As a global citizen, I support Article 9. In fact, I think that all constitutions should INCLUDE an Article 9 and... a global campaign to that end is needed, and certainly not the elimination of yours (Japan's)."