The outward signs of any Japanese matsuri are the most puzzling enigmas to the stranger who sees them for the first time. They are many and varied; they are quite unlike anything in the way of holiday decoration ever seen in the Occident; they have each a meaning founded upon some belief or some tradition, --- a meaning known to every Japanese child; but that meaning is utterly impossible for any foreigner to guess.

A little less than a century after Hearn wrote these words, the first St. Patrick's Day parade in Tokyo in 1991 joined Japan's many matsuris, with decorations easily understandable to people all over the world. This year marks the 15th anniversary of the first Japanese St. Patrick's Day parade down Omote-Sando's broad, tree-lined boulevard in Tokyo's youth mecca, Harajuku. This year, six parades will be taking place throughout Japan, in Nagoya, Sendai, Kyoto, Ise, Yokohama, and Tokyo. 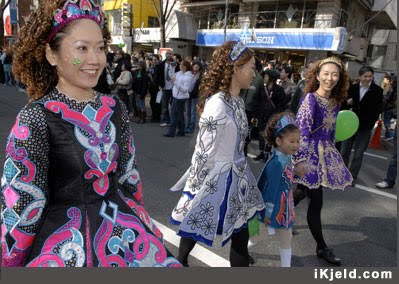 Thomas Cahill's 1995 book tells us how the Irish saved civilization during the European Middle Ages. However, it remains a mystery how and why Irish people from the far western end of the massive Eurasian landmass, leapfrogged two continents, to its far eastern end in Japan—to make Tokyo an epicenter of ever-increasing waves of St. Patrick's Day parades spreading throughout the archipelago. These Irish-Japanese parades seem to be generated by enthusiasm at the grassroots, thus are different from other adopted European and American holidays such as Valentine's Day and Christmas, popularized by department stores for commercial reasons.

There are many issues here that merit scrutiny and discussion by those interested in multiculturalism: What is it about St. Patrick's Day that gives it such strong appeal in Japan? The Guinness? The similarity to Japanese matsuri? The costumes? The music? The dancing? How does the Irish concept Craic compare with the Japanese term Tanoshii? Are they both the same and different? Why and how?

Does everyone, in fact, become Irish on St. Patrick's Day? That would make St.Patrick's Day's "Irishness" a metaculture, possibly saving contemporary civilization by serving as a global day of ethnic transcendence every year.

Why did Japan become the eastern center for St. Patrick's Day parades? Simply because of geography, because it's at the far eastern end of Eurasia and the Irish could go no further? Or are there more compelling reasons why? And, will these parades now begin spreading from Japan westward through Korea to China to India, in a reverse path from Buddhism? Will Celtic Christian motifs join the syncretic art in the Dunhuang caves in China? Who will be the pilgrims and saints spearheading this movement? Do I hear Enya singing "Sumiregusa" ("Wild Violet") in Japanese in the background? 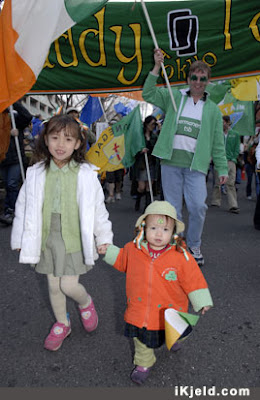 The St. Patrick's Day parade, now a global cottage industry, has been multicultural from its inception. It was not indigenous to Ireland, but, instead, created in the Irish-American diasporan culture when the first parade took place in 1762 in New York. When Irish immigrants flooded the United States to escape the mid-1800's Irish Famine, they encountered discrimination by the dominant Anglo-Protestants. As St. Patrick's Day became a rallying symbol for Irish-American pride, parades began proliferating all over the United States.

The story of the Irish in Japan, of course, dates at least back to Lafcadio Hearn, a nineteenth-century global nomad, and an Anglo-Irish-Greek-American-Japanese hyphenate. About a century after the chronicler of "Old Japan" migrated to the archipelago, Irish engineers, business people, and teachers started arriving in larger numbers during Ireland's economic slump when Japan experienced its 1980's Go-Go decade.

Around one hundred young Irish teachers come to Japan on the JET program every year. Some Irish students simply come to Japan to study or visit. A sizeable proportion of these people have remained to permanently work for a Japanese company, often marrying Japanese spouses. When the Irish economy began taking off in the 1990's, IT and other business networks have developed between the two countries. Japanese companies have established offices and manufacturing plants in Ireland and Irish businesses have come to Japan. There are also 70 Irish pubs throughout Japan, from Kyushu to Hokkaido; the Japan Gaelic Athletic Association; and several Irish music and dance groups and schools.

One of my most pleasant memories of the Irish community in Tokyo is of an Irish-Indian-Japanese St. Patrick's Day party at the Irish ambassador's house in the early 1990's, where a Japanese virtuoso Celtic harpist played in the background.

The ambassador's wife was from India so they had an Irish-Punjabi fusion cuisine buffet – Irish soda bread served with curry dishes – with Guinness Stout and Bailey's Irish Creme for beverages. When I commented on how great the combination was, a young Irishman told me that India and Ireland actually have ancient connections and that the Irish and Indian languages are related through the Indo-European/Central Asian family. For example, the word for "brother" in Sanskrit is bhratar, and related to the Irish brathair.

And while there are differences between Ireland and Japan, they have more in common besides both being island outposts of Eurasia. In ancient Ireland, before the Christian conversion, the sun was also a powerful symbol. It's said that St. Patrick actually incorporated sun symbology with that of the cross, creating the Celtic cross. Their cultures share the veneration of water as a regenerative symbol in ritual cleansing and purification. There's a deep love of poetry in both countries. Seamus Heaney, the Irish literary Nobel laureate, is a personal friend of Emperor Akihito and Empress Michiko, who visited him last year.

An Irish friend of mine, who is married to a Japanese woman, and lives in Japan permanently, told me he felt at home in Japan from the moment he arrived, especially when he saw the spirals and circles in the rock gardens of Kyoto. They reminded him of Celtic art.

Similarly, a Japanese friend of mine told me that traditional Irish music awakened something hauntingly powerful inside of him. I told him perhaps aspects of traditional Japanese culture—repressed in Japan during its rapid modernization during the Meiji (1868-1912) period when schools began teaching classical European music at the expense of traditional Japanese music; similarly to the Anglo-Saxon repression of Celtic culture—still lingered in the Japanese collective unconscious. Perhaps these yearnings for what had been lost began surfacing in him upon the recognition of a parallel of itself in the traditional Irish musical revivals.

Formerly suppressed indigenous and traditional cultures have not only resurfaced, but are also flourishing worldwide. In the African-American experience, ancient African rhythms survived severe cultural repression during slavery. One African-American scholar attributes this to persistent "cultural memory." In the 1990's, as a Japanese traditional musical revival began building steam in tandem with the Irish traditional musical explosion (and world music everywhere), I couldn't help but wonder if there was something very old and powerful at play. 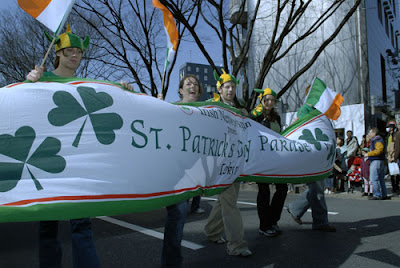 Echoing Buddhist thought and the mysticism of other faith traditions, the Irish poet William Butler Yeats, who had his own connections with Japan, including writing a Noh play, At the Hawk's Well, had another more mystical theory—that we all resonate to archetypal symbols, no matter from which culture, because, ultimately, we are all made of one single energy—and that memories of this unity can be evoked by symbols:


The borders of our minds are ever shifting
And many minds can flow into one another...

And create or reveal a single mind, a single energy

But these are just a couple of possible hypotheses on the topic of the proliferation of Irish parades in Japan, a subject which deserves much more investigation, and, as a toast to this ongoing discussion, I join all those in Japan and everywhere wishing each other "Éirinn go Brách"or "Happy St.  Patrick's Day!"