Tokyo fire bombing survivor: "Japan starting down road to war again" • Remembering the victims & survivors of the bombings of 67 Japanese & Okinawan cities from 1942 through 1945, & all bombing victims worldwide from 1911 to 2015 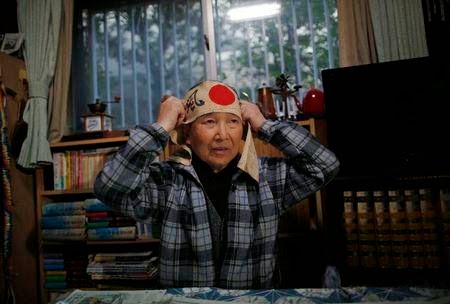 Katsumoto Saotome, a survivor of Great Tokyo Air Raids, wears a headband
with words reading 'Kamikaze' on it, which he carried during an evacuation in the bombing.
(Photo: Reuters)

Reuters journalist Elaine Lies's article on the commemoration of the firebombing of Tokyo, "Tokyo fire bombing survivor fears Japan starting down road to war again," gives voice to one of the many Pacific War survivors warning us about the Japanese government's remilitarization.


Katsumoto Saotome was 12 the night he ran for his life through a sea of flames, jumping over smoldering railroad ties along a train track as U.S. B-29 bombers rained incendiary bombs down around him...

Now, as memories fade of how civilians suffered during World War Two - suffering Saotome blames on Japan's wartime leaders who thought of their citizens as "weeds" - the 82-year-old author fears Japan may be marching toward war again.

"Everyone thinks at first that it's nothing, but more and more things accumulate, and then it's repression. I worry about what happens to women and children in this situation. We have to talk about it, maybe that will put a brake on things."

For Saotome and others of his age, the war stole their childhood. In school, before being conscripted to work in factories, they learned that the "kamikaze" divine wind would annihilate Japan's enemies. Should Japan lose, they would have to choose death over dishonor and kill themselves...

With more than 80 percent of Japanese, including Abe, born after the war, Saotome worries that reluctance to discuss painful issues may mean repeating past mistakes. Political apathy is also a worry, he says...

"Those of us who survived have a duty to become a voice for the voiceless," Saotome said. "If I'm quiet, it means I've accepted the situation. If we don't speak up, the past will be made to disappear."

As we remember the 70th anniversary of the March 9-10 all-night US firebombing of Tokyo, we also remember the largely forgotten firebombings of over 66 other cities in Japan and Okinawa. Historian Mark Selden has noted  that the scale of civilian casualties in Japanese cities "had no parallel in the history of bombing."

The US bombed Kobe, then the sixth largest city, with a population of one million, in 84 air raids, between April 18, 1942 to August 15, 1945. On July 24, 1945, a US B29 dropped 4 experimental "mock" atomic bombs ("pumpkin bombs") , with the same scale and weight as the "Little Boy" nuclear bomb dropped on Hiroshima, on Kobe. With a total death toll of more than 8,000, the death rate of civilians par square mile in Kobe was worse than that of Hiroshima and Tokyo.  Studio Ghibli's 1988 Grave of the Fireflies, an acclaimed animation about 2 child survivors of firebombings, was set in Kobe.

Before Tokyo and Kobe, on October 10, 1944,  US bombers began "softening up" assaults on Naha, the capital of Okinawa, destroying 80 to 90 percent  of the city. A thousand Okinawan civilians, twice as many as Japanese military personnel, were killed during the 10/10 raid. Colonel Yahara, the only surviving senior staff officer of Japan’s 32nd Army, wrote in The Battle for Okinawa (1972) that that the 10/10 destruction of Naha was “a sad foretaste of the tragedy to come” to Okinawa and mainland Japan. Yahara said Imperial Japan should have surrendered earlier to stem the loss of civilian life.  Most of the civilians who died during the Battle of Okinawa were killed by American bombardments.

The US bombings of Tokyo began in December 1944 and continued through August 13, 1945. March 9-10 was the worst of more than 60 air raids on Tokyo: over a hundred thousand civilians were killed and most of old capital was destroyed in one night.

In March 2007, 112 survivors and family members announced they would sue Japanese government for an apology and damages. The the plaintiffs, the oldest of whom was eighty-six and whose average age was seventy-four at the time, filed the suit with the Tokyo District Court in April. As expected, in 2013, the Japanese Supreme Court upheld the dismissal of the lawsuit.

However, the plaintiffs were able to tell their story, in their voices. Following this action, other lawsuits brought by Pacific War victims against the Japanese government, also raising the issue of war responsibility and accountability, followed, including actions by survivors of the Battle of Okinawa and the survivors of the Japanese fire bombings of Chongqing from 1938 to 1943 which killed 10,000 civilians.

According to the Shock and Awe Conference on Aerial Bombing held at the London School of Economics in November, 2011, the "development of aerial bombardment was more than just a military revolution.' [Aerial bombardment] "redrew the legal and moral boundaries between civilians and combatants, spread the theatre of war into new environments and expanded the battlefield, making cities into places of mass death and taking warfare into private, domestic spaces." This era began in 1911 when an Italian pilot, Guilio Cavotti, dropped the first bombs from a plane to the oasis of Tagiura outside Tripoli in north Africa during the Italian-Turkish War f ought between the Ottoman Empire and the Kingdom of Italy from September 29, 1911, to October 18, 1912 over the colonial control of Libya.

In the seventy years since the end of Pacific War, war memories and growing awareness of suffering of victims and survivors throughout the Asia-Pacific has continue to fuel peace building efforts by survivors and their descendants. Last June, 1,760,000 supporters of the Japanese Peace Constitution delivered a petition to Prime Minister Abe asking him not to change Article 9.

"The Firebombing of Tokyo: Views from the Ground" (Brett Fisk and Cary Karakas, The Asia-Pacific Journal, Jan. 17, 2011)

"The Great Tokyo Air Raid and the Bombing of Civilians in World War II", The Asahi Shimbun, reposted at The Asia-Pacific Journal, March 11, 2010)

"A Forgotten Holocaust: US Bombing Strategy, the Destruction of Japanese Cities and the American Way of War from World War II to Iraq [*]" (Mark Selden, The Asia-Pacific Journal, May 2, 2007)