Alicia Bay Laurel and Takuji - "Imagine" and "Give Peace a Chance" at Hiroshima Nagarekawa Church, which stands on what was ground zero


Our friends, Alicia Bay Laurel and Takuji, performing "Imagine" and "Give Peace a Chance" in Hiroshima 08/08/2015. Author/artist/vocalist/songwriter Alicia Bay Laurel and jazz multi-instrumentalist Takuji perform John Lennon's anti-war classics "Imagine" and "Give Peace a Chance" at a peace concert that was part of the 70th anniversary of the atomic bombing of Hiroshima and Nagasaki, August 8, 2015, at Hiroshima Nagarekawa Church, which stands on what was ground zero in Hiroshima.
Posted by TenThousandThings at 7:48 PM No comments:
Email ThisBlogThis!Share to TwitterShare to FacebookShare to Pinterest
Labels: community, compassion, Hiroshima, Japan, music, Nagasaki, Nuclear-Free, peace


Thank you is a recognition of the reality. We are living here. We are using [nuclear [and fossil]] electricity...We created the social system -- media, education, politics -- on top of the same system. We have to admit it. Yes, this is where we are. And we have to embrace it, whether it's ugly or not. This is us. And only after that, we can say what we want to do. But the problem is, many people refuse to recognize this reality.

What do we do with the very unhappy society we've created. you know, education, family situation, families are collapsing. We pit all the children against each other; they're supposed to be be competing and fighting against each other, forever. I think the roots are all entangled and maybe the same one. So what we have to do, is recognize the root. This is a great opportunity. This crisis is an opportunity...to understand this mindset, not just a society, but ourselves, our mindset...

The musician Ryuichi Sakamoto...said, "We are risking our lives, not only human lives, for the sake of what? Just electricity?"

But this is a mindset we have been captured in...

For what? Is it worth risking our lives, our future, our children's future?

The objective of this system is to make more, consume more, discard more. It's eternal growth: mass production, mass consumption, mass discarding. When you look around, this whole system is made up of excess. So I think excess is the nature of the present time. More. Bigger. Faster...This is a religion of efficiency.

When you look at politics, at media, the situation seems so pessimistic. But at the same time, I witness so many good signs and I can see very clearly that what's happening in Japan all over the place has a strong resonance with what's happening outside of Japan; In Europe, in Africa, Latin America, everywhere, similar things are happening. They're coming out of the mindset that my generation is still trying to cling to. Young people are saying, 'Just forget it. They are not attracted anymore. They're not deceived. More and more, I can feel good things are happening...

The rest of the story we have to create... 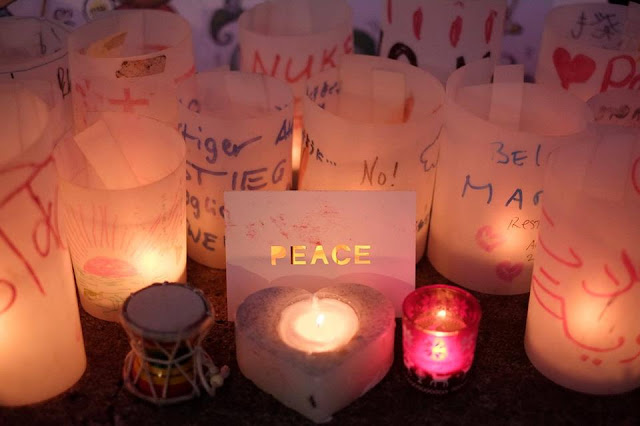