The Global Article 9 Conference to Abolish War, a three-day extravaganza of lectures, symposia, and workshops aimed at drawing the world’s attention to the importance of protecting the peace-upholding Article 9 of Japan’s Constitution, concluded successfully on May 6th. The conference turnout far exceeded organizers’ expectations, drawing over 30,000 participants in four locales across the country: more than 20,000 at the main conference venue of Makuhari Messe in Chiba (about an hour’s train ride east of Tokyo), and just over 11,000 total in the cities of Hiroshima, Osaka and Sendai. The attendees also included over 200 participants traveling overseas from 31 countries.

In order to appeal to as many constituencies as possible, the conference featured a creatively organized program offering something for all interests. Following opening remarks by conference co-organizer Yoshioka Tatsuya from the longstanding peace advocacy/action NGO Peace Boat, the gathering at the Chiba venue hosted a lineup of speeches that were interspersed with dynamic musical performances from a number of performers supporting the spirit of the conference.

The first keynote speaker was Mairead Corrigan Maguire, a 1976 Nobel Peace Prize Laureate for her work to end the conflict in Northern Ireland. She called on the Japanese government to recognize that the “War on Terror” was a failed strategy, and that the attempt to pursue it by dismantling Article 9 would amount to nothing less than contempt for the memory of past war victims (both Japanese and otherwise), as well as potentially threaten the very survival of humanity and the environment alike by unleashing the nuclear horrors that Japan should have already learned from. Citing the case of her own country, she reiterated that engaging in dialogue with one’s perceived enemies was the only possible road to peace—and that this must occur at the level of ordinary citizens in addition to national governments.

Cora Weiss, UN Representative of the International Peace Bureau and President of the Hague Appeal for Peace, delivered the second keynote speech, where she gave an impassioned plea for the realization that wars leave behind a path of destruction affecting generations to come. She also made the point that the real enemies we must now face up to are those of poverty, disease and ignorance—all ills that the use of weaponry will only inflame rather than defeat.

Later in the program came a creatively designed discussion titled “Iraq, the U.S., and Japan” that featured a lineup of several panelists. When viewed together as a collective whole, the individual experience of each speaker provided a startlingly integrated portrait of the culture of militarism that now frames the issue of Japan’s Constitutional Article 9. To briefly summarize:

l   The first speaker was Ann Wright, who retired from the U.S. military as a colonel and then worked as a diplomat for the U.S. State Department before resigning in opposition to the war in Iraq. She offered a scathing criticism of U.S. policy, particularly as regards the “War on Terror,” and exhorted Japan not to head down the same dangerous road by following U.S. demands that it remilitarize. She urged Japan to instead utilize Article 9 as an opportunity to reject the military-industrial complex in favor of a new style of economics, which could also set a powerful example for other nations to follow.
l   This presentation was followed by Aidan Delgado, a former soldier from the U.S. military who resigned as a conscientious objector after being assigned to Abu Ghraib prison in Iraq. “As a Buddhist, I had no choice but to quit the army once I realized that war was not what I was taught it was while growing up,” he recalled. “In reality, it’s nothing more than legalized murder, oppression and destruction that only serves to increase the level of suffering in the world.”
l   Iraqi humanitarian aid worker (and former soldier) Kasim Turki then explained his experience as a fighter who came to realize that nonviolence was the only way forward—even after seeing his city completely destroyed, experiencing direct mistreatment from U.S. soldiers, and also losing his brother due in part to their callous inaction following an accident. “I realized that revenge would only bring more destruction, and so I decided to break the cycle and become a peacemaker,” he explained.
l   Japanese novelist Amamiya Karin spoke next, pointing out the obvious link between militarism and poverty, and noting the dangerous trend whereby rising numbers of jobless and homeless youth in Japan are increasingly being targeted by recruitment agencies to join the Japanese Self Defense Forces. She implored the Japanese government to redirect its budget away from militarization and toward social services in order to avoid the vicious spiral existing now in the U.S., whereby poor youth are drawn into the military due to having few or no other options.
l   Finally, aid worker Takato Nahoko, who was taken hostage in Iraq in 2004, credited the existence of Article 9 for playing a large part in saving her life. “The reason why our captors finally released us was due to our peaceful activities and lack of association with any sort of military policy, she explained. “I am a living example of someone who is standing here before you today because of the principles of Article 9, and so I urge Japan to uphold this clause—as well as other nations to implement something similar. Doing so just may save someone else’s life in the future.”

After more energetic musical performances topped off the day’s proceedings, the second day of the conference featured a full program addressing a multitude of peace-related issues represented by Article 9. For example, six symposium sessions were offered on the topics of world conflict and nonviolence, realizing the spirit of Article 9 in Asia, women’s peace-building power, linking peace and the environment, crisis and the future of Article 9, and Article 9 and the nuclear age. There were also workshops held on the topics of disarmament and peace education, panel discussions on the topics of demilitarization and globalization, and special forums led by the Global Partnership for the Prevention of Armed Conflict and the International Lawyers Panel. 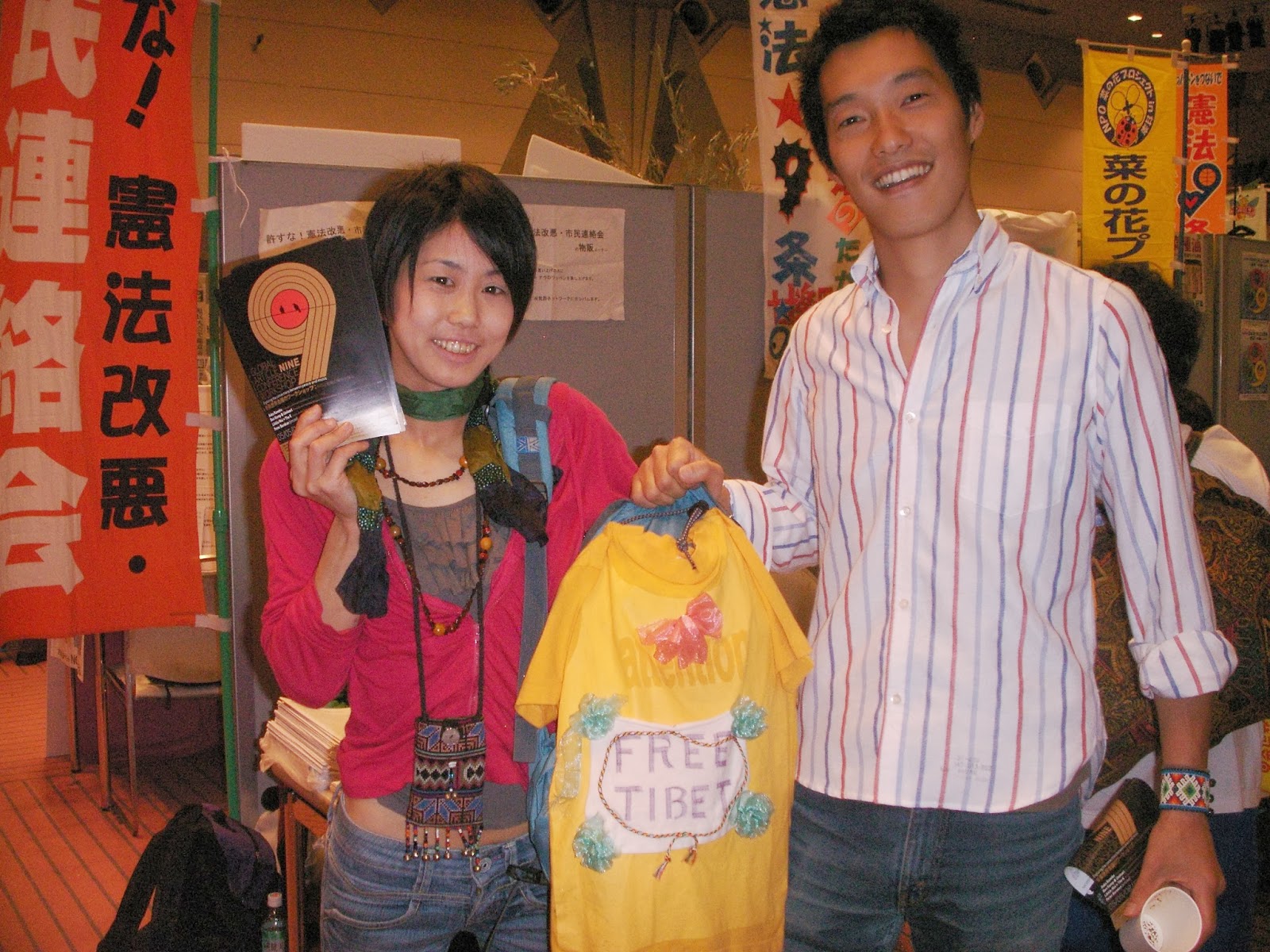 In addition, the conference featured hundreds of workshops, films, artistic performances, and much more, including sessions covering topics such as Article 9 and the media, war and oppression, using Article 9 to build a nuclear-free world, Article 9 and U.S. military bases in Okinawa, banning depleted uranium (DU) weapons, and the practical use of Article 9 in conflict regions. Additional offerings included a liveperformance/ discussion workshop on the connections between peace and music; a concert by musician and Chernobyl survivor Nataliya Gudziy; a talk by 94 year-old former soldier Ryutaro Honda, who will travel to Europe next year to share his experience and urge protection for Article 9; and a report on the Article 9 peace walk, whereby an international group of participants spent 72 days walking from Hiroshima to the Chiba conference venue in order to raise awareness about the importance of Article 9.

The conference venue itself was a virtual festival of activity, with hundreds of peace organizations of all sizes offering literature and selling goods at booths set up throughout the facility. These included several groups calling for the U.S. military to relinquish its hold upon land and property and return them to local people, such as the Azabu Heliport in central Tokyo, and wildlife-rich areas in Okinawa such as the Henoko seaport and Takae village in the forested region of Yanbaru.

Some of the more creative peace campaigners in attendance included the Kikanshi Media Center, which was selling packages of low-calorie, 8-grain blend “Article 9 noodles” that promised to cultivate “peaceful hearts” amongst its consumers; Fukuoka-based university lecturer Yoshi Kuzume, who regularly travels abroad handing out T-shirts with the text of Article 9 in both Japanese and English in order to help spread its message around the world; and Isao Hashimoto, an artist who aimed to draw attention to the reality of the nuclear age with his striking piece featuring a succession of blinking lights on a world map that indicate the history of nuclear testing around the globe.

The conference wrapped up with a press conference whereby several official documents were released, including a final conference declaration and statements to be submitted to the upcoming G8 Summit and NPT (nuclear nonproliferation treaty) preparatory committee meetings. In essence, the message of the conference was simple and yet powerfully straightforward: utilize Article 9 as a practical model to be implemented by all governments in order to ensure that the doctrine of “peace through force” shall no longer be utilized as a tool of the nation-state.

In addition to supporting Article 9, many attendees were motivated by other various peace-related causes. Women’s shelter caseworker Akiko Sugiyama, who came to the conference with her boyfriend, community developer Naoki Kimura, carried around a backpack from which was conspicuously draped a handmade T-shirt inscribed with the message ‘Free Tibet.’ “I have been concerned about the situation in Tibet since volunteering at a Tibetan freedom concert several years ago, and so after the recent violence, I really felt that I had to try and do something,” Sugiyama explained. “I carry this shirt with me everywhere I go, and people are always coming up to me to talk about the situation in Tibet, which I find really heartening. It’s only a small action, but I’m hopeful that it will connect with something larger and help make a difference.”

Shuji Goto, a computer-analyst from the city of Kawasaki near Tokyo, felt compelled to come to the conference after considering the real-life implications of war and militarism. “When Japan conducted a ballistic missile interceptor test last December, there was all sorts of hype in the media about how amazing and wonderful it was,” he recalled. “But after doing some simple calculations based upon figures given by the UN Refugee Agency, I figured out that with the one-trillion yen that’s estimated to be spent on the entire defense shield project, meals could be provided to 82 million refugees for a full year. It makes me angry that the Japanese government is spending its time trying to get rid of Article 9 and pouring money into fighting the North Koreans, when we could be helping to feed them instead.”