Tokyo's use of Okinawa as a "national sacrifice zone" began during World War II, when Japanese government leaders knew they would inevitably lose the Pacific War against the US.  Some leaders, including Prime Minister Konoe, pushed for an early surrender, however his and other voices were drowned out by those who decided to "sacrifice" Okinawa in a last, hellish battle, seeking to prolong the war, in the belief this would result in better terms of surrender.

The cost of this decision: one third (100-150,000) of the population of Okinawa, 70,000 Japanese soldiers and 12,000 American soldiers; the dislocation of 90 percent of the Okinawan people, and the near-total destruction of material Ryukyuan culture. In the postwar period, Tokyo ceded Okinawa to Washington which seized and destroyed entire villages "by bayonet and bulldozer" throughout the prefecture, to make way for massive military bases used for weapons testing and training during US wars in Korea, Vietnam, Iraq and Afghanistan. Even after the 1972 "reversion" to Tokyo rule, the US military bases remained.

In the 1990's, Washington resurrected expansion plans (including a massive war training base at Henoko and Oura Bay that dated back to the 1960's). Okinawans have protested this plan since its inception.

Tohoko (along with Fukui) was decided upon as a national nuclear sacrifice zone also during the postwar period when US nuclear industry companies sought to introduce the "peaceful atom" to Japan. Eiji Oguma details Tohoku's history and the selection process (which exploited the region's economic poverty) in"The Hidden Face of Disaster: 3.11, the Historical Structure and Future of Japan’s Northeast", published at The Asia-Pacific Journal on Aug. 1, 2012. 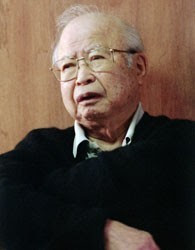 It was through Tatsuhiro Oshiro's collection of stories, "Hatsukayo," that I learned that hibiscus have a special place in the culture of Okinawa. I had arrived in Japan's southernmost prefecture amidst a festival celebrating the New Year in the afterlife, and the sight of people placing offerings of hibiscus -- known as "flowers of the afterlife" -- on their ancestors' graves in the cold rain was something to behold. It overlapped with Okinawa's tragic history.

Newspaper headlines that day were all about the U.S. military realignment, including the transfer of U.S. troops to Guam and the Futenma air station relocation issue.

"The papers here are like this all the time," Oshiro, 86, said as he glanced at the headlines. "I wrote some 20 years ago that Okinawa was a domestic colony, and I wondered at first if I'd gone too far. But these days, the expression 'domestic (internal) colony' has become widely accepted."

Looking over at the window, Oshiro continued: "It's cold these days, so I bury myself under the covers and wonder whether the people living in the disaster areas (in the Tohoku region) are warm enough. Who would've thought that Okinawa and the Tohoku region would be linked this way in solidarity?"

Oshiro says that the Tohoku region holds a special place in his heart. When he attended the award ceremony in Tokyo for the Akutagawa Prize, which he received for his novel "Cocktail Party," he had also traveled through Fukushima on the suggestion of a former college classmate.

So what is the "new solidarity" this writer -- who for years has focused on the suffering of Okinawa -- talking about? The answer is this: sacrifice that state power imposes on the weak. In other words, political discrimination.

The islands have been a part of Japan only since the late 1800s, when the Meiji government annexed the Ryukyu Kingdom and eventually renamed it Okinawa Prefecture. After the San Francisco Peace Treaty and the U.S.-Japan Security Treaty were signed in 1951, Okinawa Prefecture was put under U.S. military administration. As a result, while Okinawa constituted a mere 0.6 percent of Japan's land area, more than 70 percent of U.S. military bases in Japan were built there. Meanwhile, the Tohoku region, which relied heavily on the agricultural and natural resource industries, became an enormous source of labor for Tokyo. Furthermore, the electrical power produced by nuclear power plants that have been built in high concentrations in de-populated areas has not benefitted local communities, but rather Tokyo and other major metropolitan areas.

Both the numerous incidents and accidents that occur because of the military bases in Okinawa and the dangers of nuclear disasters in Tohoku have ostensibly been set off with massive subsidies handed out to local communities. However, we've arrived at a point now where we can no longer overlook the history of the weak being placed at the mercy of national policies, or the contradictions and inconsistencies that have long been left unaddressed.

"This imposition of sacrifice is a carrot-or-stick situation," Oshiro said. "To change this situation, there's nothing but for Diet members from Okinawa to do their job well..."

It was when Oshiro refolded his arms over his chest that a deafening roar was heard outside.

"That's a military plane," Oshiro explained. "They're always flying above, so this area's been designated as a noise pollution area. The nearby Shuri Junior High School is a soundproof facility. There are times when the planes fly even lower, and we have to stop talking altogether." This, I learned, was Okinawa's reality.

Last year, Oshiro published "Futenma yo" (To Futenma), a book of short stories. In the first story, whose title is that of the book, Oshiro eagerly tackles the Futenma relocation through a family who lives near the air station.

The story reaches its climax when the musical accompaniment to a Ryukyu dance is drowned out by the noise from U.S. helicopters, but our heroine continues to perform. Her determination symbolizes the local culture that refuses to be defeated by the heavy burdens of military bases. At the same time, however, the heroine's grandmother's plan to find a family heirloom buried on ancestral lands that have been seized by the U.S. military ends in failure.

In the book, Oshiro addresses uncompromising will and crushed hopes. "These two extremes represent the essence of the military base issue," Oshiro said. "My intention was to write about the identity of the Okinawan people who want to weave our history together and regain the land that's steeped with memories."

The Great East Japan Earthquake and ensuing tsunami and nuclear disaster have forced many people from the Tohoku region from their homelands. Asked whether this tragedy is something that can be shared with Okinawa, Oshiro rips open a package to reveal the March issue of the literary journal Bungakukai. It features a debate between two of Oshiro's acquaintances -- Fukushima resident, novelist and monk Sokyu Genyu and former foreign ministry official Masaru Sato -- in a section titled "Interpreting 'Japan' through Fukushima and Okinawa."

Oshiro said: "I think it was Jan. 9 that Genyu stopped by here when he was in Okinawa to give a lecture. That's when he told me about his interview with Sato. Genyu said, "We have to do something that puts us in confrontation with the state.'"

In the magazine interview, Genyu said there was a parallel between the proposed construction of an intermediate storage facility for radioactive waste in Fukushima and the issue of U.S. military bases. Here, too, the government's failure to act has already led partly to the imposition of sacrifices. Amid the ongoing political confusion in Japan, is there any reason not to be pessimistic?

"Japanese people have grown accustomed to luxuries in their everyday lives, right? I wonder if an ideology or policy that will trim off the excess fat and desires from our lives won't emerge," he said. "But my outlook is not grim."

Asked why, Oshiro responded: "After the massive earthquake, those in the disaster areas didn't panic, and have been acting levelheadedly while being considerate of each other. That's hopeful. There's a very old concept of mutual support in Okinawa, too, called 'yuimaru.' If we're able to foster this spirit around the country, I believe that we'll be able to build a new kind of civilization."

Suddenly, instead of the roar of military jets, birds could be heard chirping outside.

After the interview, I got into a car driven by a local friend of mine, heading toward U.S. Marine Corps Air Station Futenma in Ginowan. The city was in the midst of mayoral elections, and candidates and their campaign crews drove around, loudly appealing to voters for their support.

"Look, it's a KC130 refueling aircraft!" my friend said, suddenly. "It's a touch-and-go landing."

We watched as a dark aircraft made a sharp dive in the air right above us. Its explosive noise drowned out election pledges being shouted through amplifiers. This was everyday life here, I thought. Experiencing, if just for a moment, the "sacrifice being imposed on the weak," I was struck again by the weight of Oshiro's words.