Souls of Zen - Buddhism, Ancestors, & the 2011 Tsunami in Japan; collective forgetting of coastal Tohoku's historic villages; and those left behind....

Souls of Zen - Buddhism, Ancestors, and the 2011 Tsunami in Japan:
Trailer #1 from Jakob Montrasio on Vimeo.

Souls of Zen – Buddhism, Ancestors, and the 2011 Tsunami in Japan follows the "greatest religious mobilization in Japan's postwar history." Filmed from March to December 2011, the documentary by Tim Graf, a graduate student at Tohoku University, and director/cinematographer Jakob Montrasio explored  the everyday lives of Buddhist professionals in the disaster zone, and Japan’s tradition of ancestor veneration in the wake of 3/11, focusing on Soto Zen and Jodo Pure Land Buddhism.

"Tsunami zone’s village culture fades into fog of history,"a soulful article by historian Jeff Kingston, published at JT today, updates Tim Graf's engagement with survivors. The young scholar's views are now more subdued in light of the collective forgetting of this historic coastal region, as he describes many survivors (and perhaps himself) experiencing what psychologists would recognize as symptoms of collective post-traumatic stress:


True, some of the larger towns seem to be on the rebound, but in between, the visitor is confronted by many “missing teeth” along Tohoku’s saw-tooth seaboard. A number of these towns were already dying, with the tsunami providing the coup de grace. We can better appreciate what Tohoku’s shoreline villages represented now that they have been washed away and former residents are marooned in soulless temporary-housing ghettoes where the greatest risks are isolation and boredom. Are we ready to write off the charming hamlets that used to be such a key feature of this coastal culture? I guess so, but recalling my initial visit there in 1982, I can’t help but feel nostalgia for this disappearing Japan...

Tim Graf, a Ph.D. candidate in religious studies at Heidelberg University and research associate at Tohoku University, made a poignant and haunting video about the tragic events in 2011 titled, “Souls of Zen — Buddhism, Ancestors, and the Tsunami in Japan” (www.soulsofzen.com). Recently, Graf shared some of his reflections...

Conducting fieldwork is easier, Graf says, because people “are so happy to have someone to talk to, they just pour out their hearts, as fewer volunteers come by to listen these days.”

...Graf observes: “Of course, I knew that I wouldn’t be ‘done’ with the disaster topic, nor did I think that the people of Tohoku felt better three years on — I knew that life was no movie — but going back to the tsunami zone three years later had an even stronger impact on me. I think it was a shock to see that nothing had changed — and now, many new problems, and the fear that this would never end. My informants looked older — tired and exhausted, trapped in time.”

He adds: “It really surprised me how 3/11 continues to be one ever-growing mess. There is simply no end in sight; no recovery, nothing. Things only seemed to get worse. For many people, there is recovery. But things develop differently for different people. And I fear this gap will only widen over time. I think this must be even more stressful for those who feel left behind... 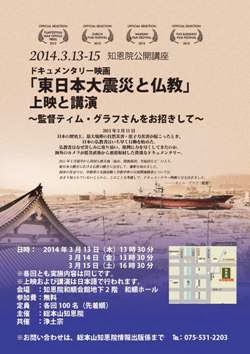 Chion-in, the head temple of Jodo (Pure Land) Buddhism in Japan will screen Souls of Zen in Kyoto after the 3/11 remembrance period: