Spanish artist Salvador Dali was deeply terrified by the atomic bombings of Hiroshima and Nagasaki, and his exact, detailed style was very much suited to show the horror of the A-bomb, which the U.S. government tried to keep a secret by classifying photos and descriptions of Hiroshima and Nagasaki until the end of the U.S. military occupation of Japan in 1952. (The Bureau of Atomic Tourism has more details if you want to know more about the legacy of nuclear weapons in the U.S.) 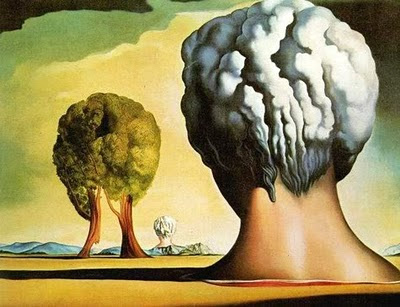 Even today, do people understand the real horror of atomic bombs? If not, then, why not? 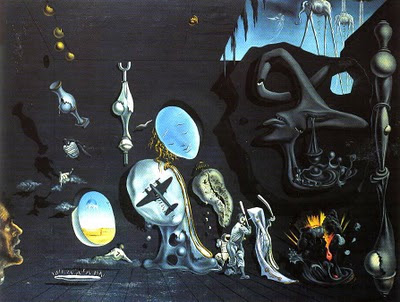 Dali's paintings are on display in Fukushima prefecture, where you can view Melancholy Atomic and Uranium Idyll and The Three Sphinxes of Bikini at the Morohashi Museum of Modern Art.

This video from the Nihon University (Nichidai) channel features an interview with Morohashi Eiji, the son of the founder of the unique museum, and scenes from the Morohashi Museum (29:20):#271美術館への誘い ダリの世界

Is there a hidden message in Dali's 1947 Bikini hydrogen bomb painting? Morohashi Eiji has the details in the video interview ( around 12:30-14:00).

Wishing to find out more about Dali's inspiration around this time: The Triangle offers this quote:


During the post World War II era, Dali found new inspiration in the person and the ideas of Werner Heisenberg and his Uncertainty Principle. Along with this came a renewed interest in spirituality for which Dali coined a new term: "Nuclear Mysticism". In his "Anti-Matter Manifesto" of 1958 Dali wrote: "In the Surrealist period I wanted to create the iconography of the interior world and the world of the marvelous, of my father Freud. Today the exterior world and that of physics, has transcended the one of psychology. My father today is Dr. Heisenberg."


The atomic bomb that levelled Hiroshima in 1945 had an enormous impact on Dali’s way of looking at the world. He was certainly among the first artists to recognise that the arrival of the nuclear age had fundamentally altered man’s perception of nature. In the decades to come Dali immersed himself in physics and produced dozens of works depicting objects exploded into their component particles.

In the year of Hiroshima he painted “Melancholy Atomic and Uranium Idyll”... In a bombed bunker intermingling atoms and electrons seem to draw a connection between aerial assault and baseball, one critic noting that the New York Yankees were known as the Bronx Bombers.

Dali also sculpted a statue, 'The Sun God Rising In Okinawa," to express his wish for peace and healing for Okinawa. 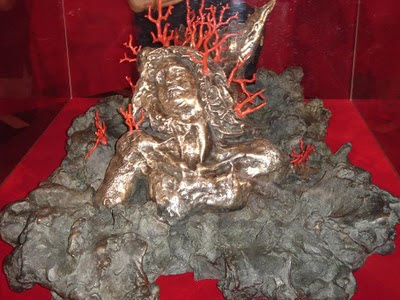 When it was loaned to Urasoe City Museum in Okinawa for a 2008 exhibition, people called upon the owner to give it to the prefecture permanently. (Photo from Okinawa daisuki na ningen)

Strange, but I cannot think of even a single American artist who compare to Salvador Dali. Is there even one man or woman who stood up and made a case against nuclear weapons?

I can't wait to share this with my mom, who is a Dali fan.

Thank you Drea for your comments.

Your blog is beautiful and insightful.

We am hoping that Washington will give Guamanians more time -- so that there is a democratic reassessment of the "build-up."

So far it looks like a bunch of military-industrial construction companies -- who are the Big Fish -- getting ready for a feeding frenzy of your magnificent island.

We posted on some posts at your blog -- and will do more to get voices of Guamanians out into the world.