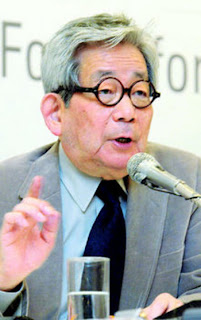 Responding to the political and media circus over unresolved (since the Pacific War)  territorial disputes between Japan, China and South Korea, Japanese writers, journalists, scholars, and civil society leaders held a press conference on Sept. 28, 2012 in Tokyo to publicize their call on Japan to "recognize, reflect on, and sincerely articulate its historical issues" in East Asia.  The group, supported by Nobel laureate Kenzaburo Oe, jointly signed a civic statement: "Stop the vicious cycle of territorial dispute!”.

Jeong Nam-ku, Tokyo correspondent of The Hankyoreh detailed the event:

The statement urged the Japanese public "not to forget that the backdrop for the current territorial frictions is modern Japan's history of invading Asian countries."

The participants gave a number of suggestions for reducing friction, including enacting norms of behavior to deter such conflicts in East Asia, setting up forums for dialogue and discussions toward joint development of local resources, and establishing a framework for private dialogue linking South Korea, China, Japan, Taiwan, and Okinawa.

On the same day, Japanese novelist Haruki Murakami published a column in the Asahi Shimbun expressing concern that the violent nationalism stirred by the territorial conflict was destroying East Asian cultural bridges: "We cannot block the path for souls to cross national borders."

In response to Oe's & Murakami's public statements, Chinese novelist Yan Lianke penned a call for reason and peace, published at The New York Times on Oct. 5:


Again and again, I pray in these dark nights: Please, no more guns and drums. All wars are disastrous. The bloodstains of the Sino-Japanese war during World War II remain vivid even today in our collective memory.

The day after, on Oct. 6, the East Asia Citizens Forum, comprised of representatives from South Korea, China, Taiwan, Okinawa, and Japan, held a forum in Taiwan and issued a statement, “Facing history, resolving disputes, working towards peace in East Asia”  in conjunction with a petition calling for peaceful relations, starting at the grassroots level, between citizens of East Asian countries, despite recurrent belligerent nationalism at the government level.   Park Min-hee, correspondent for the South Korean progressive newspaper, The Hankyoreh, reported:


The campaign is being led by Professor Chen Guang Sheng of Shanghai Jiao Tong University of Taiwan at the helm, Prof. Lee Dae-hoon of Sungkonghoe University (NGO studies, member of Democratic Professor Association International Solidarity Committee), Atsushi Okamoto, former editor in chief of Sekai magazine of Japan, Nohira Shinsaku, representative of Peace Boat, Prof. Wakabayashi Jiyo of Japan’s Okinawa University, Prof. Wang Xiaoming of Shanghai University, and Prof. Han Jialing of Beijing Academy of Social Sciences.In an email interview with the Hankyoreh on Oct. 24, Prof. Chen said, “I hope the solidarity and signature campaign in East Asia can ease tensions in the region and act as a chance to inform the people that the government is not the only group that has power to make decisions concerning this issue. There are other opinions in civilian society.” He went on to say, “I hope this campaign will pave the way for other experiences and sentiments within East Asia to be exchanged and understood, and lay the groundwork for future common understanding.”
...Prof. Lee Dae-hoon [of of Sungkonghoe University in South Korea], who participated in the forum said, “The campaign is focused on the goal of uniting East Asian civil society and preventing territorial disputes from escalating while resolving the situation in a non-militaristic and peaceful way. We must not allow territorial disputes to be used to satisfy imperialistic power or agression.” He added, “The campaign was started with intellectuals at the center, but we will gather citizens’ signatures in the next few months. Based on citizens’ opinions, we will lead activities to seek and propose solutions on these territorial conflicts. 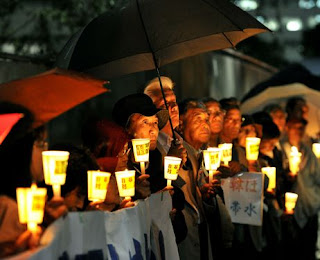 The Japanese civic group followed their Sept. 28 press conference with  a demonstration rally in front of the No. 2 Lower House members' office building in Tokyo’s Chiyoda Ward on Oct. 18, covered by Hatsumoto Hosokawa for Asahi:


Pointing out that "territorial issues rock nationalism in any country" and that "action on one side leads to action from the other," the group's Internet statement urged people to "reflect upon history" and called for resolution "through peaceful dialogue."

This snowballing of dialogue between citizen groups and the public is a form of collective grassroots empowerment that peace studies scholar Johan Galtung calls the "great chain of nonviolence".
Posted by TenThousandThings at 5:45 AM
Email ThisBlogThis!Share to TwitterShare to FacebookShare to Pinterest
Labels: China, citizen action, Japan, Korean Peninsula, life-sustaining civilization, peace networks, writers