"They Don't Want You to Know What is Going On": Performance Artists Noora Baker and Yoshiko Chuma Bring Pain of Palestinian Reality onto Tokyo Stage

Japan-born, New-York based performance artist Yoshiko Chuma, founder of the School of Hard Knocks, and Noora Baker, a dancer with the El Funoun company in Ramallah, Palestinian territories, teamed up this week to bring a powerful message to a Tokyo audience in a small theater in Sangenjaya.

Titled "Love Story, Palestine", the multi-media show featured Chuma and Baker performing to the backdrop of imagery from 6 Seconds in Ramallah, the show performed during Chuma's recent visit to Palestine with a team of other Japanese musicians and artists, including genre-bending violinist Aska Kaneko and singer Sizzle Ohtaka. Interspersing the performance were hauntingly gorgeous vocals from Ohtaka, who was live in the house, as well as a frank conversation between Chuma and Baker about a reality that few outsiders know.

Baker recounted stories of relatives and friends arrested on a constant basis by Israeli occupation officers--often with little or no justification. "In addition to the regular checkpoints that we all must pass through, they suddenly also sometimes erect barriers so that you cannot pass,"Baker recounted. "They do not care even if they are separating families." She relayed a story of being detained at age seven with a group of other children and having tear gas thrown at her by authorities simply because she happened to be at the wrong place at the wrong time.

In response to Chuma's question whether her troupe could possibly face arrest if their visits to Palestine continued, Baker responded, "Yes, the action of simply visiting Palestine on multiple occasions is enough to draw yourself into the spotlight and possibly face detention by Israeli authorities. They don't want you to know what is going on."

Chuma then went on to point out the similarities existing between Palestine and Fukushima following last year's nuclear accident, wherein people truly have no idea what is actually going on. "Both places appear normal from the outside, but in reality, they are not." 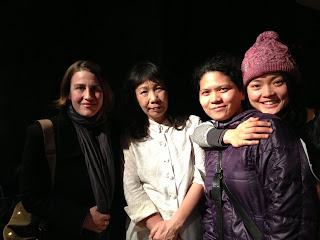 The latest news about Yoshiko Chuma and the School of Hard Knocks may be read on her blog.

An interesting review of "Love Story, Palestine" may also be read in Dance Magazine here.

Related posts on this blog: