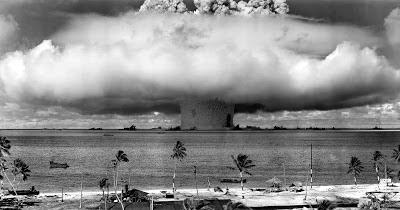 On the 59th anniversary of the dropping of the “Bravo” bomb on my home, I find myself wrestling with what it means to remember, recommit and resist.

From 1946 to 1958, the United States conducted 67 nuclear tests in my home, the Marshall Islands, all of which were considered atmospheric. The most powerful of those tests was the “Bravo” shot, a 15 megaton device detonated on March 1, 1954, at Bikini atoll – which was 1,000 times the power of the Hiroshima bomb. Since then, the US has continued to deny responsibility while many Marshallese continue to die due to cancer and other radiation related illnesses. In my own family both my grandparents passed away before I was born due to cancer and just two years ago I lost my ten year old niece Bianca to leukaemia. Radiation related illnesses endure into today, and many more of our family members continue to battle with the effects of those tests which took place over 50 years ago.

We Marshallese grow up with this history and these stories. We know them all too well. Not just stories of cancer, but also stories of babies born with no limbs, of stillbirths and thyroid problems, of families starving on outer atolls after being displaced from their own homes, stories of ash that fell from the sky that looked like snow. And then there are the stories of the land we lost – the beautiful bountiful Bikini atoll, how the elders cried as they were ripped from the shores of their ancestors...

I am proud to say I come from a line of activists who have fought against these atrocities. My uncle Dwight Heine was the principal draftsman of the Marshallese protest submitted in 1954 to the UN regarding the nuclear test. The document he wrote is quiet, dignified, and understated. “Some of our people were hurt during the recent nuclear test,” he wrote, “and we have asked the aid of the United Nations, of which the United States is a member and to which it is answerable for its administration of the trust territory, to stop the experiments there. Or, if this is not possible, then to be a little more careful..."

It’s time that the next generation, our generation, picks up the torch from our elders and continues the fight for justice for our people. Oceania Rising brings together the next generation of activists - not just from the Marshallese community, but also from Kanaka Maoli, Chamorro, Okinawan, Japanese, and Tongan communities. This event is not only about honouring Marshallese nuclear survivors, but it is also about honouring our shared histories of solidarity building against militarization, imperialism and the impacts that it’s had on our Oceania. I am grateful to be learning more about these shared stories within our Pacific brothers and sisters’ communities, and I am grateful to learn more about my own history as well. It is this history which gives us the strength that is needed to continue to remember, recommit, and resist, as we continue the struggle to bring about change for our people. 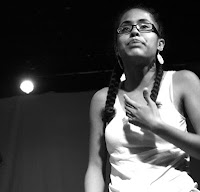