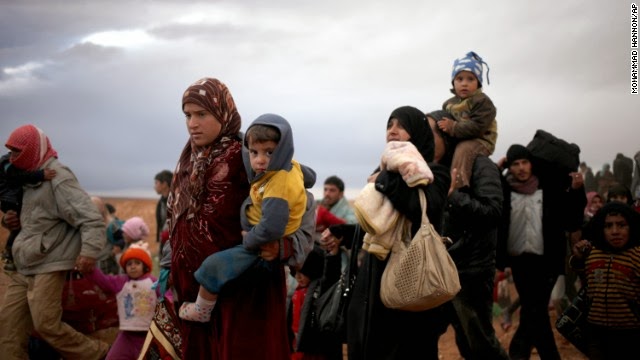 The UN has called the Syrian refugee crisis the "greatest humanitarian tragedy of our times."  The war has resulted in the biggest humanitarian crisis in modern history.  2.3 million Syrians have fled to makeshift camps in neighboring countries. Half that number are children, whose families and communities have been torn apart. 6.5 million Syrians have been internally displaced, unable to be reached by aid workers, because of the level of violence.

Syrian Christians, Shiite Muslims, and moderate rebels have been targeted by foreign (Al Qaeda-backed) Sunni jihadists who have joined the Syrian civil war for their own religio-patriotic reasons.  Weapons sent by the Obama administration to Syrian rebels have been captured by Al Qaeda now in Syria.

...In September Sweden granted permanent residency to all Syrian asylum-seekers in the country. It was a compassionate decision, but also a logical one: the conflict is showing no sign of ending and refugees won’t be able to return to their country anytime soon.

Meanwhile, Germany announced that it would offer temporary residencies to 10,000 Syrian refugees from the main host countries.

Just this week, Syria broke another record: it is the subject of the UN’s largest-ever humanitarian appeal for the second year running. Half of Syria’s population of 22 million will need humanitarian assistance in 2014. Up to three million Syrians are refugees, 6.5 million are displaced internally and 600,000 refugee children are out of school.

The Maronite Archbishop of Damascus likens the situation of Syrian refugees to the story of Christmas:

Syria, at this Christmas time, resembles very much, the crib: an opened crib, with no doors, cold, deprived and extremely poor.

The Child Jesus doesn't lack companions in Syria - thousands of children who lost their homes are living under tents as poor as Bethlehem’s crib.

Jesus is not alone in his extreme poverty. Syrian Children, abandoned children and scarred by scenes of violence, want to be in the place of Jesus who has parents that surrounding him, cherishing him.

This taste of bitterness is very visible in the eyes of these Syrian children - their tears and their silence.

Some of them envy the Divine Child because he found a manger to be born in and to be sheltered, while some unlucky Syrian children are born under the bombs or on the exodus way.

In her difficulties, Mary is not alone anymore; ill-fated mothers, less lucky, are living in extreme poverty and handle family responsibilities alone without husbands.

The insecurity, the precariousness, of Bethlehem’s crib brings a consolation to these mothers crushed by intractable problems and despair.

The reassuring presence of Joseph at the side of the Holy Family is a source of jealousy for thousands of families deprived of a father - deprivation which breeds fear, anguish and insecurity. Our unemployed envy Joseph the carpenter who saves his family from being in need.

The Shepherds and their flocks, close by the manger, speak to the many Syrian farmers who lost 70% of their livestock in this war. The nomadic life on this biblical earth that dates back to Abraham and even further back, brutally disappears with its ancient customs of hospitality and its traditional culture.

The dogs of the Christmas shepherds have compassion for the fate of the domestic animals in Syria scarred by the deadly violence; roaming amongst the ruins and feeding themselves with corpses.

The infernal sound of war suffocates the “Gloria” of the Angels... This symphony for peace gives way to the hatred, division and cruel atrocities.

May the three Magi bring to Syria’s crib, the most precious Christmas gifts: Peace, Forgiveness and Reconciliation, so that the CHRISTMAS STAR might shine again in our dark nights.

Let us pray to the Divine Child. Lord, graciously hear us.

Posted by TenThousandThings at 12:13 AM
Email ThisBlogThis!Share to TwitterShare to FacebookShare to Pinterest
Labels: children, Refugees